Party officials are frustrated that the former president’s record was collateral damage in the debate attacks on Joe Biden. 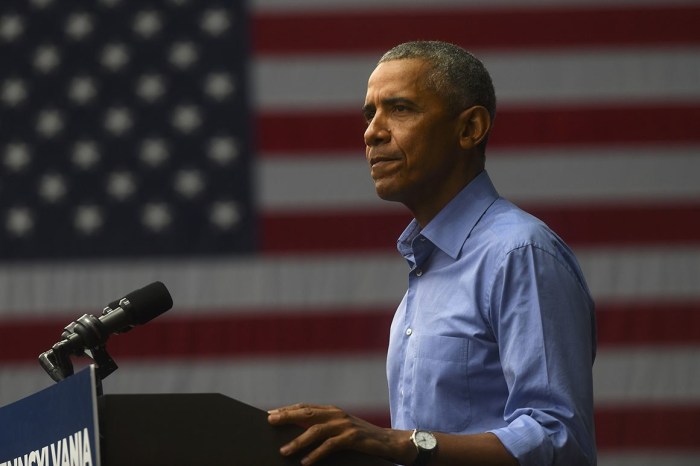 Joe Biden is fair game. Barack Obama is not.

Former Obama White House officials and allies responded in force Thursday to stress that message after several Democratic contenders criticized the former president in a debate that featured uncharacteristically tough assessments of his policies.

The disparagement of aspects of Obama’s record led to stern warnings that the tactic could backfire on the presidential candidates themselves — and perhaps arm Republicans with ammunition to attack the eventual Democratic nominee next fall.

“I don’t know why you would attack Barack Obama or his record or any part of him when he’s the most popular person in the party,” he added. “And I don’t think it helps for the general election voters, either. I don’t know what they’re thinking.”

On Thursday night at a campaign rally in Cincinnati, the president echoed the theme.

“The Democrats spent more time attacking Barack Obama than they did attacking me, practically,” he said. “This morning, that’s all the fake news was talking about.“

Obama, who endorsed dozens of party candidates in 2018 and was active on the campaign trail, remains a revered figure within the party. Several presidential hopefuls have sought the two-term president’s advice and counsel, and he continues to have periodic conversations with candidates, according to a source close to the former president.

But as rivals attempted to level attacks on Biden, Obama got caught in the crossfire Wednesday. The former president, once referred to by critics as the “deporter in chief,” came under fire for the rate of deportations under his watch, and his signature health care law also drew heavy scrutiny.

In large part, it’s because Biden’s eight-year service to the nation’s first black president has made him a difficult target in the primary. He often calls Obama by his first name to illustrate their closeness and makes references to the “Obama-Biden administration.” More recently, he used Obama’s decision to tap him as a running mate in 2008 to swat down criticism of his record on criminal justice.

New Jersey Sen. Cory Booker accused Biden of invoking Obama more than any other candidate on stage Wednesday. “You can’t have it both ways,” he said. “You can’t do it when it’s convenient and then dodge it when it’s not.”

But Booker wasn’t the only one to call out Biden. New York Mayor Bill de Blasio asked Biden if he used his power as VP to stop the deportations. Biden said he was keeping his recommendations private but said Obama “moved to fundamentally change the system.”

In a discussion with California Sen. Kamala Harris over her “Medicare for All” style plan, Biden stressed that “Obamacare is working” and Democrats should build on its success.

It was one of many instances in which Biden was forced into a defensive posture over the Obama record, leaving some Democrats frustrated.

“The GOP didn’t attack Reagan, they built him up for decades,” tweeted Neera Tanden, CEO and president of the liberal think tank Center for American Progress and the Obama campaign’s domestic policy director. “Dem Candidates who attack Obama are wrong and terrible. Obama wasn’t perfect, but come on people, next to Trump, he kind of is.”

Kate Bedingfield, Biden’s deputy campaign manager and communications director, told MSNBC, “It was interesting last night to see a debate in which a lot of Democrats on the stage decided to attack the legacy of Barack Obama rather than to take it directly to Donald Trump.”

Biden himself told reporters in Detroit on Thursday he was proud to serve alongside Obama and proud of what he accomplished. He said he was surprised by the “degree of criticism” but insisted Obama had nothing to apologize for.

“The next debate, I hope we can talk about how we fix our answers, to fix things that Trump has broken, not how Barack Obama made all these mistakes,” Biden said. “He didn’t. He didn’t.”

Obama, who has largely stayed on the sidelines and has no plans to endorse in the primary, understands that the Democratic Party has changed since 2008 and candidates won’t be entirely in lockstep with him, according to the source close to him.

He wants to see them share a forward-looking vision for the country but doesn’t mind a fact-based criticism of his record, said the source, who described talking about what the Obama administration did — and what the candidates would do differently — as the appropriate way to criticize him.

In TV interviews Thursday morning, Harris and Booker heaped praise on Obama but also defended their approaches in the debate. Harris framed her health care proposal to MSNBC as a plan that builds on Obamacare. Booker, meanwhile, told CNN that “nothing is without” criticism in public service and not even Obama is perfect.

Still, many Democrats feel going after Obama is the wrong way to go.

“No sane political person would advise any candidate to run on a policy platform of third Obama term because the issues facing our country have changed and the debates have progressed,” said Jen Psaki, who served as the Obama White House’s communications director. “But every minute spent arguing over the record of a former president who is supported by 95 percent of the Democratic electorate and not on making the case for why a Democrat should replace Donald Trump is a minute wasted.”

Henry Crespo, former chair of the Democratic Black Caucus of Florida, who watched the debate with about a dozen fellow black Democratic officials and operatives, cold-called a POLITICO reporter outraged with what he saw transpire on the debate stage Tuesday and the following day, when Harris and Booker appeared to him to be insufficiently supportive of Obama.

“Obama is an icon in our community. And they’re attacking his legacy Obamacare? And Joe Biden is the one defending it?” he asked.

“We were sitting here watching this and wondering: ‘What the hell are you doing? What is wrong with our party?’ It’s like they want to lose,” Crespo said, adding that Democrats like him resent Harris and Booker for attacking Biden’s record on race.

“Joe Biden is not Bull Connor,” Crespo said. “You just can’t make us believe it.”

Rep. Cedric Richmond (D-La.), Biden’s campaign co-chair and the former chairman of the Congressional Black Caucus, said Obamacare is widely supported among African Americans because it’s good policy and people know how hard it was for Obama to pass his signature health law.

“I don’t think it’s the wisest move to go after it. You’ve got to realize when you go after it, you’re doing exactly what Trump and Republicans have tried to do, which is repeal Obamacare,” he said. “When you talk about the Affordable Care Act, there’s deep, deep appreciation for it. That was a hard-fought win.”

Though two prominent African American senators — Harris and Booker — have emerged as prominent Biden critics in the primary, Biden has a significant edge in support from black voters.

“The attacks, particularly from Harris and Booker, have been backfiring with black voters who always show up in Democratic primaries,” said Patrick Murray, a Monmouth University pollster who released a survey last week showing Biden capturing 51 percent of the African-American vote in South Carolina’s Democratic primary, where more than 60 percent of the electorate is black.

“Black voters are significantly less liberal than white voters in the Democratic primary,” Murray said. “So if their strategy is to attack him because he’s not woke enough on race or left enough on issues like Medicare for All, it’s not going to help you with these voters.”

Murray said polls show the dismissal of Obamacare made no sense more broadly with Democratic voters who like the program. Surveys also show voters prefer Biden’s proposal to add a Medicare-like public option to Obamacare rather than scrapping all private insurance and instituting a Medicare for All plan.

Several members of the Obama administration let his first attorney general, Eric Holder, speak for them, retweeting a now-viral message to the field he posted Wednesday night.

“To my fellow Democrats. Be wary of attacking the Obama record,” he wrote. “Build on it. Expand it. But there is little to be gained — for you or the party — by attacking a very successful and still popular Democratic President.”

Source: ‘Stay away from Barack’: Dems seethe over criticism of Obama – POLITICO