Severe floods and lightning kill at least 666 across India, Nepal, Bangladesh and Pakistan as monsoon takes its toll.

At least 666 people have been killed by flash floods, lightning and torrential rain caused by the monsoon in South Asia, officials say, as further rain is expected in the region through the week.

Millions have been affected in India, Nepal, Bangladesh and Pakistan, where landslides and other effects of the rain have forced thousands to flee their homes.

In India, at least 467 people have been killed in heavy rains since the start of July, AFP news agency reported, citing disaster management authorities, with several districts in the states of Uttar Pradesh, Bihar and Assam cut off from aid.

A Nepalese soldier carries a child along a flooded colony in Kathmandu, Nepal [Reuters]

In neighbouring Nepal, officials told Al Jazeera the death toll had risen to at least 95 on Tuesday, with 29 reported missing.

“The death toll could go up as we have just received reports of landslides in Gulmi district of western Nepal,” said Ramkrishna Subedi, spokesperson for Nepal’s ministry of home affairs.

In Bangladesh, at least 78 have been killed and more than 120 are missing in the country’s northern areas after rains and flooding throughout the month, according to government data.

At least 14 people drowned on Sunday, the highest death toll for a single day in this month’s monsoon in the country, the data showed.

“We have enough relief materials stocked and all-out preparations are being taken to take those to the flood-affected victims,” said Enamur Rehman, the Bangladeshi disaster management minister.

Officials in Pakistan said rescue work was ongoing on Tuesday to find at least 21 people in the northern Neelum valley, located in Pakistan-administered Kashmir and that, so far, at least 26 people had been killed in the floods.

“Twenty-one people are still missing, and we are continuing rescue operations there in Leswa area of the Neelum Valley,” said Khursheed Mir, a disaster management official.

Pakistan’s National Disaster Management Authority said it had distributed more than 17 tonnes of food aid, in addition to more than 670 tents for those affected by the floods, the majority of whom were in Pakistan-administered Kashmir. 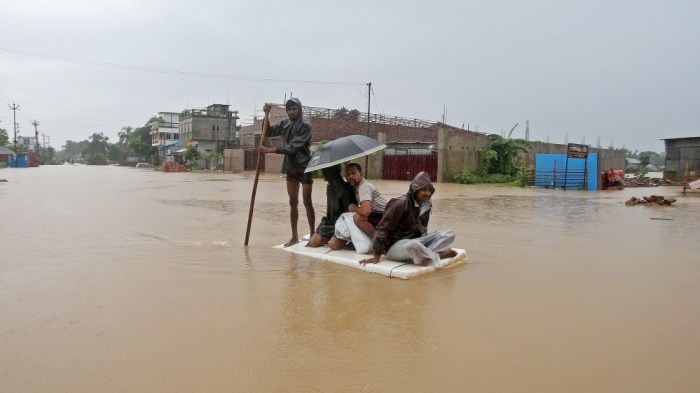 Villagers use a makeshift raft to cross a flooded area outside Agartala city, India [Jayanta Dey/Reuters]

Meteorological authorities have warned of continuing rains throughout the week in the region.

India’s Meteorological Department has warned of “extremely heavy falls” in Goa, while coastal Karnataka, Assam, Meghalaya, West Bengal and Sikkim brace for heavy downpours in the next few days.

Pakistan’s meteorological department warned of widespread rains and possible flooding in the northern areas of the country, including Pakistan-administered Kashmir.

“All concerned authorities are advised to remain alert and take precautionary measures,” warned the Meteorological Department in a statement released on Monday evening.

Arifuzzaman Bhuiyan, executive engineer of the Bangladesh Water Development Board and duty officer of the Flood Forecasting and Warning Centre (FFWC), told Al Jazeera that floodwaters have started to recede in many districts, but further flooding is expected after fresh rainfall.

“If this trend continues, it may take around one week for the waters to recede in all the affected districts.”

Bhuiyan said the flood will continue to deteriorate further in some northern districts as extremely heavy rainfalls are forecast in the area.

Heavy losses due to the yearly monsoon rains are common in South Asia, where many rural homes are built of mud or stone and mountainous regions are prone to landslides.