Trump needs to placate voters who love his economic record but can’t stand his conduct. He doesn’t seem to care. 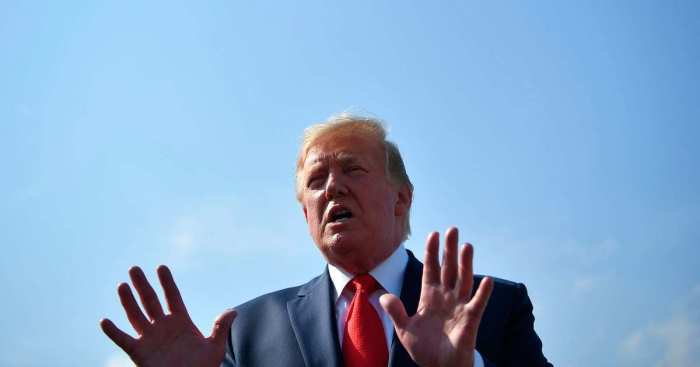 This week’s presidentially driven orgy of racist and nativist sentiment — and the unusually loud (even for the Trump era) reactions to it — has been particularly fascinating to those paying close attention to the impact it may have on the 2020 election. Ron Brownstein has been focused for a while on a key segment of voters who really like the way the economy is performing under Trump and aren’t really attached to the Democratic Party, but who also find Trump’s conduct unacceptably reprehensible. So, naturally, he’s gobsmacked at the president’s determination to reinforce his image as a racist bully. And he’s got the numbers to prove how politically risky — nay, self-destructive — it is:

Trump’s instinct is to center his politics on cultural and racial conflicts that pit Americans uneasy about the nation’s changing identity against those who welcome or accept it. But Trump also faces clear evidence that he may be unable to build a winning coalition with just the voters satisfied with his performance in office.

The latest such evidence comes in a new study released today by Navigator Research, a consortium of Democratic research and advocacy groups. The report, provided exclusively to The Atlantic, examines a group that many analysts in both parties believe could prove to be the key bloc of 2020 swing voters: Americans who say they approve of Trump’s management of the economy, but still disapprove of his overall performance as president. And it shows Trump facing significant headwinds among that potentially critical group, partly because of the divisive language and behavior he’s taken to new heights, or lows, since last weekend—tweeting about the congresswomen and encouraging his supporters to attack them as well.

If these voters don’t evolve from happiness with the Trump economy to more general job approval, says Brownstein, the president probably can’t win:

[T]he key measure for Trump next year will be the share of voters who approve of his overall performance, not the (for now) wider group who give him good marks on the economy. “They have to become approvers,” [Republican pollster Gene] Ulm says. For incumbents, he adds, “job approval is your vote—it’s almost like religion.” The latest NBC/Wall Street Journal poll dramatically underlines that point. It found that in 2020 matchups against any of the four major Democratic contenders—former Vice President Joe Biden and Senators Bernie Sanders of Vermont, Kamala Harris of California, and Elizabeth Warren of Massachusetts—Trump drew support from a minuscule 5 percent or less of voters who disapproved of his overall job performance as president. (Trump led each Democrat by at least 83 percentage points among voters who approve of his performance.)

In this respect, Trump is no different than his predecessors:

Exit polls found that Obama carried only 3 percent of voters who disapproved of his job performance in 2012 and Bush won just 6 percent of them in 2004. The notion, common especially in White Houses seeking reelection, that large numbers of voters may dislike the incumbent but vote for him anyway—because they dislike the challenger even more—is simply not supported by electoral evidence. Bush and Obama, in fact, each lost a higher share of voters who approved of their performance than they won among those who disapproved.

So it’s not actually “the economy, stupid,” that will determine the outcome of the 2020 contest, though the economy remains Trump’s strongest asset. To the extent that he either can’t control the behavior that is distracting attention from the economy, or has become convinced there’s another, hate-based path to victory, he’s defying the experts in both parties. Or perhaps he’s doing something truly ironic: emulating all the despised pollsters and Fake Media types in over-interpreting the 2016 results as meaning that he can just demonize the opposition promiscuously and win despite daily breaking norms that actually matter to swing voters.

The other strong possibility, of course, is that it’s a mistake to attribute any real calculation to Trump’s course of conduct. According to this perspective, Trump behaves like a white-nationalist thug because he is one. He’s not playing some sort of multidimensional chess that shows how devilishly clever he is; he’s using the world’s biggest megaphone to act on the insecurity, megalomania, desire to demean other people that defines his character. As the comedian Flip Wilson used to say: “What you see is what you get.” If that’s the case, all the numbers and rational analysis in the world won’t keep Trump from cutting racist capers and threatening his many enemies all the way to November of next year. It will be a wild ride.

Source: Trump’s Racism Is Pushing Away the Voters He Needs in 2020