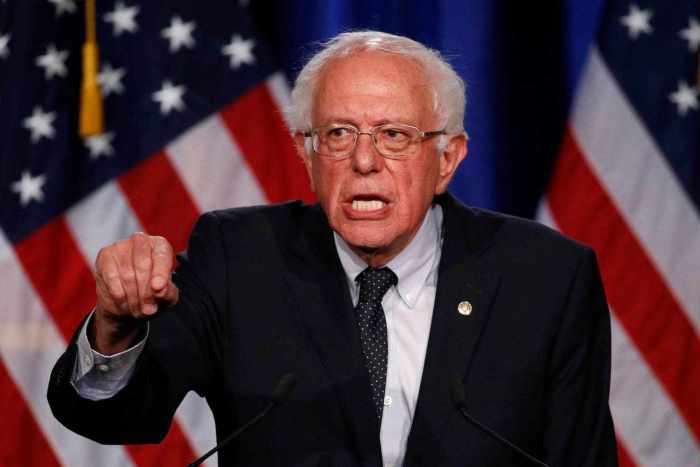 Sen. Bernie Sanders (I-Vt.), who is seeking the Democratic presidential nomination, delivers a speech on his Medicare-for-all proposal Wednesday at George Washington University in the District. (Patrick Semansky/AP)

Unionized campaign organizers working for Sen. Bernie Sanders’s presidential effort are battling with its management, arguing that the compensation and treatment they are receiving does not meet the standards Sanders espouses in his rhetoric, according to internal communications.

Campaign field hires have demanded an annual salary they say would be equivalent to a $15-an-hour wage, which Sanders for years has said should be the federal minimum. The organizers and other employees supporting them have invoked the senator’s words and principles in making their case to campaign manager Faiz Shakir, the documents reviewed by The Washington Post show.

Sanders has made standing up for workers a central theme of his presidential campaigns — this year marching with McDonald’s employees seeking higher wages, pressing Walmart shareholders to pay workers more and showing solidarity with university personnel on strike. The independent from Vermont has proudly touted his campaign as the first presidential effort to unionize its employees, and his defense of the working class has been a signature element of his brand of democratic socialism and a rallying cry for the populist movement he claims to lead.

Details about the negotiations between Shakir and the union representing Sanders’s campaign workers have not been publicly reported until now. A review of emails, instant messages and other documents obtained by The Post show that the conflict dates back to at least May and remains unresolved. The documents were provided to The Post on the condition of anonymity because of the sensitivity of the private talks.

The Sanders campaign late Thursday issued a statement lauding its union contract. “We know our campaign offers wages and benefits competitive with other campaigns, as is shown by the latest fundraising reports,” Shakir said. “Every member of the campaign, from the candidate on down, joined this movement in order to defeat Donald Trump and transform America. Bernie Sanders is the most pro-worker and pro-labor candidate running for president. We have tremendous staff who are working hard. Bernie and I both strongly believe in the sanctity of the collective bargaining process and we will not deviate from our commitment to it.”

It was unclear when or whether Sanders had been made aware of the situation.

In a statement issued earlier Thursday night, the union representing the campaign workers, United Food & Commercial Workers Local 400, said it could not comment “on specific, ongoing internal processes between our members and their employer.”

“As union members, the Bernie 2020 campaign staff have access to myriad protections and benefits secured by their one-of-a-kind union contract, including many internal avenues to democratically address any number of ongoing workplace issues, including changes to pay, benefits, and other working conditions,” the statement said.

“We look forward to continuing to work closely with our members and the management of the Bernie 2020 campaign to ensure all workers have dignity and respect in the workplace.”

A draft letter union members earlier had prepared to send Shakir as soon as this week said that the field organizers “cannot be expected to build the largest grassroots organizing program in American history while making poverty wages. Given our campaign’s commitment to fighting for a living wage of at least $15.00 an hour, we believe it is only fair that the campaign would carry through this commitment to its own field team.”

The draft letter estimated that field organizers were working 60 hours per week at minimum, dropping their average hourly pay to less than $13. It said that “many field staffers are barely managing to survive financially, which is severely impacting our team’s productivity and morale. Some field organizers have already left the campaign as a result.”

Field organizers are the lowest caste in politics apart from unpaid volunteers — often people in their 20s who uproot themselves and move to far-flung parts of the country to work long hours and gain campaign experience in high-stress environments.

By encouraging these workers to unionize, Sanders and his campaign opened a path to negotiate for more than the low wages that typically have prevailed in past campaigns. They are seizing the opportunity.

The Sanders campaign made history in March when it announced that all employees below the rank of deputy director would be represented by a union.

“We’re honored that his campaign will be the first to have a unionized workforce,” Shakir said in a statement at the time. Other campaigns have followed suit, with workers unionizing in at least two other active campaigns: those of Sens. Elizabeth Warren (Mass.) and former housing secretary Julián Castro.

The union and the Sanders campaign reached a collective bargaining agreement that went into effect on May 2 and expires on March 31, 2021. The agreement established wage classifications for national and state staff, ranging from $15 an hour for interns and canvassers to $100,000 annual salaries for bargaining unit deputies.

It was not completely clear why the wage dispute began so swiftly after the campaign and the union reached the initial agreement, though at that point the campaign had yet to assemble its sprawling roster of field organizers. But on May 17, Shakir convened an all-staff meeting, during which he recommended raising the pay for field organizers to $42,000 and changing the workweek specifications, according to an email he later wrote to staff. The union draft indicated he was seeking to extend the workweek to six days.

Shakir pressed for a swift vote so he could make budget decisions and decide how many field organizers to hire, according to his email.

The union rejected his offer, because the raise would have elevated field staff to a pay level responsible for paying more of their own health-care costs, according to the draft proposal the union was preparing this week.

The campaign workers decided to press harder. On July 11, dozens logged into Slack, the popular instant-messaging service used by the campaign’s employees, and began bombarding Shakir with appeals to raise pay for field organizers.

“Hi @Faiz,” the messages began. They poured in from across the country.

“I am struggling financially to do my job, and in my state, we’ve already had 4 people quit in the past 4 weeks because of financial struggles,” wrote one field organizer. Another employee said his co-workers “shouldn’t have to get payday loans to sustain themselves.”

A third said he supported the demands for higher wages “because I need to be able to feed myself.” A fourth quoted a line Sanders often uses in speeches, writing, “As you know, real change never takes place from the top on down, it always takes place from the bottom on up.”

The messages caught Shakir’s attention, and later that day he sent an email to the staff thanking them for their comments. “I do believe you are owed an explanation for the situation we find ourselves in,” he wrote in an email obtained by The Post.

In his email, Shakir recapped his thinking from May 17 and expressed regret with the outcome.

“I have no idea what debates and conversations were had, but candidly, it was a disappointing vote from my perspective,” he wrote of the union’s decision to reject his proposal. “But the campaign leadership respected the union process and the will of the membership.”

Shakir said that it would be damaging to the campaign’s budget to implement a pay hike after expanding field staff based on previously planned salary figures. In conclusion, he said, he would negotiate the matter only through the channels established by the union arrangement.

This week, the union, in conjunction with the Sanders campaign staffers it represents, has been preparing to send Shakir a new proposal. According to a draft of the proposal obtained by The Post, they are asking for $46,800 for field organizers and $62,400 for regional field directors.

It also requested that the campaign reimburse field staff for automobile transportation at $0.58 per mile.

“We expect negotiations and concessions to be given to this committee by July 31st at the latest, given the urgent nature of raising pay for Field staff and the unsustainability of the current situation,” the draft said.

Sanders, meanwhile, has continued his push for a $15-an-hour wage across the country, hailing the bill recently passed by the House to set that as the federal minimum. In an online video, his campaign featured an Iowa woman who has fought cancer and says she is struggling on $8.25 an hour from her job at McDonald’s.

“Today, we say as loudly and clearly as we can to McDonald’s: Pay your workers a living wage and negotiate with a union!” Sanders says as the video concludes.