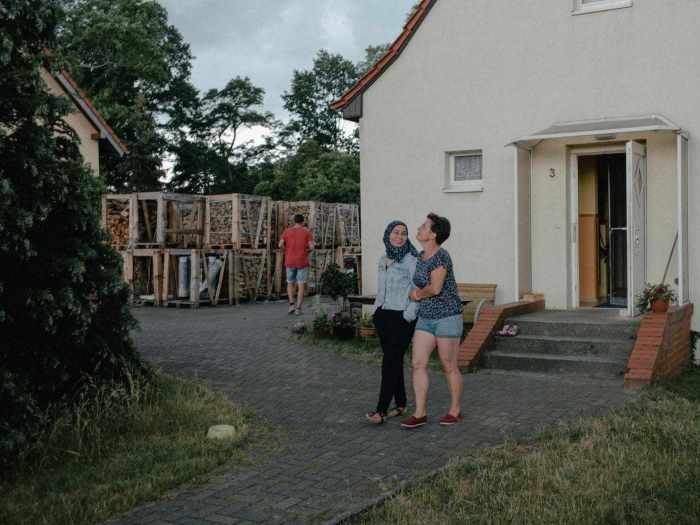 Syrian Shefaa Alfrag and her German host Franka Grösch take a walk in their village outside Frankfurt. (Nanna Heitmann/For The Washington Post)

FRANKFURT AN DER ODER, Germany — “Don’t make me cry, too,” Shefaa Alfrag told a sobbing 3-year-old Zoey. It was the last day of Alfrag’s teaching internship at a concrete-block preschool on Germany’s eastern border, and the two lingered in the doorway as Alfrag patted Zoey’s back.

Not long ago, the idea that a headscarf-wearing Syrian who speaks German with a foreign accent could work in one of society’s most sensitive spaces — caring for its children — might have been unthinkable here in Frankfurt an der Oder.

For decades, just about the only foreigners that residents knew were the Poles living on the opposite bank of the muddy Oder River. Unlike the far better-known Frankfurt in western Germany — a hub of global finance, where a majority of residents are either immigrants or children of immigrants — the eastern Frankfurt was homogenously German. And for many, proudly so. 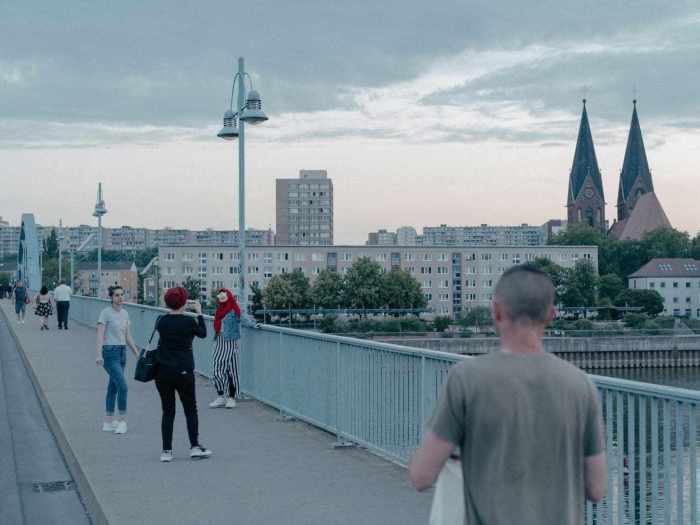 The youth cinema building from East German times has been empty for more than 20 years but is undergoing a renovation. (Nanna Heitmann/For The Washington Post)

But since Chancellor Angela Merkel chose to keep the country’s borders open to a surge of refugees in 2015, newcomers began to settle — and unsettle — here. And Frankfurters have been grappling on an intimate level with changes that have polarized Europe.

To some locals, including the city’s leaders, the refugees offer salvation after decades of devastating population decline. The city has lost nearly a third of its residents since East Germany ceased to be in 1990. The remaining population is aging fast, with deaths outnumbering births.

“Without migrants, we’re not going to be able to revitalize Frankfurt,” said René Wilke, the city’s 35-year-old leftist mayor. “The 1,400 people who came [in recent years] have already helped revitalize it.”

To others, including the party that won the most votes here in May’s European Parliament election, the new arrivals could be the coup de grace for a city that was already struggling.

“It’ll reach a point where law and order will be gone,” said Wilko Möller, a 52-year-old police officer who leads the local chapter of the far-right Alternative for Germany party (AfD). “All of us are paying for the refugee crisis.” 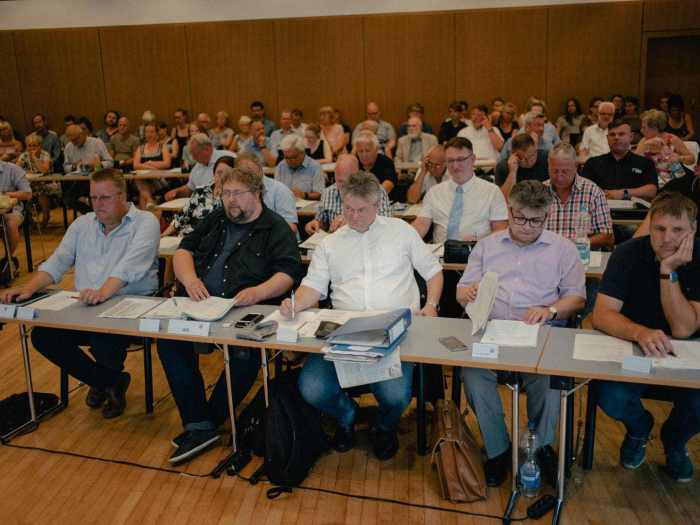 [The far right is back in the Reichstag, bringing with it taunts and insults]

For most locals, attitudes toward the newcomers fall in the vast gray area between deliverance and destruction. But each interaction between longtime residents and refu­gees such as Alfrag presents a test of an elemental proposition: Does this place want to be multicultural? Or was it better off when nearly everyone shared the same ethnic, religious and racial identity?

‘Not my dream’
Majeed Behzad, an Afghan who worked with the German military, attends a picnic at the Brückenplatz community center. (Nanna Heitmann/For The Washington Post)

“Coming to Frankfurt was not my dream,” admitted Majeed Beh­zad, a soft-spoken and slight 29-year-old Afghan man who worked as an interpreter for the German military in his native land before seeking asylum.

“If they had asked me where I wanted to go, I would have said Berlin or Hamburg. The German guy who gave me the visa for Frankfurt said, ‘At least you can get cheap cigarettes there.’ ”

This Frankfurt, a former communist stronghold, is breezily dismissed as a backwater by cosmopolitan Berliners just an hour’s train ride west. Even some among the city’s nearly 60,000 locals wonder, given the lack of lucrative jobs and relative isolation, why anyone would choose to live here.

Few refugees did. Although Germany may have been their destination of choice, they landed in this particular spot as the result of a German decree that the newcomers should be dispersed across the country — even to areas, such as Frankfurt, with little history of immigration. 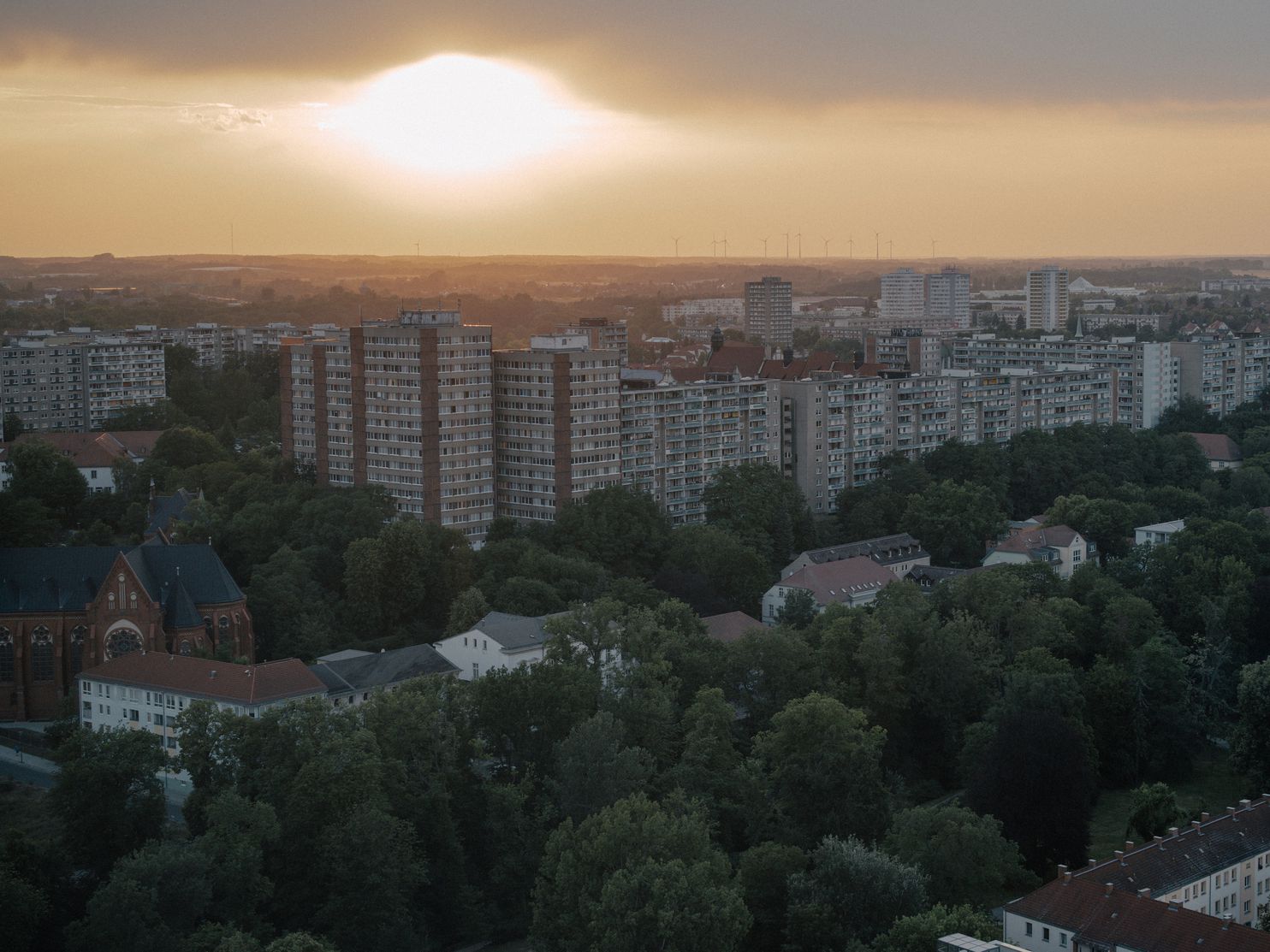 A hard first winter followed Behzad’s arrival in late 2015. The city was safe — his first and most important criterion after years of living under threat from the Taliban. But it seemed at once disorienting and small. He got lost navigating the streetcar system, and struggled to find Germans willing to befriend him, or even to talk to.

As he studied German relentlessly, some of his new vocabulary came from the words people yelled at him on the street.

“Ausländer!” a rowdy group of drunk Germans shouted as he walked home one evening.

The insults rained down, getting progressively more vulgar. Then came the bottles, glass smashing at his feet. 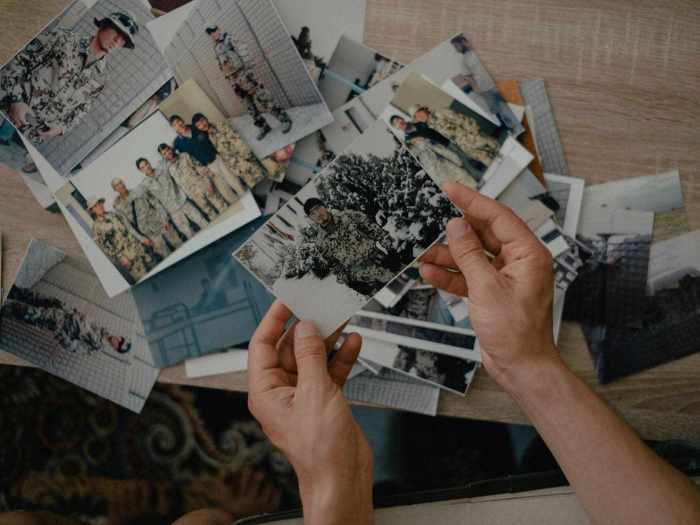 Majeed Behzad recalls his time as an interpreter for Germany soldiers in Afghanistan. (Nanna Heitmann/For The Washington Post)

These were not the Germans he knew from his days patrolling the Afghan countryside, taking incoming fire together and depending on one another as a matter of life and death.

“Germany is the best country in all of Europe — the economy, education, everything,” he said. “I had never thought that in Germany there would be racists — people who don’t like refugees. The word ‘racist’ I came to know here.”

But Behzad was undeterred. He set up a support program for refugee women and girls, and he began assisting a lawyer who takes asylum cases pro bono. As his language skills improved, he found German friends. Encounters with hostile Germans diminished. 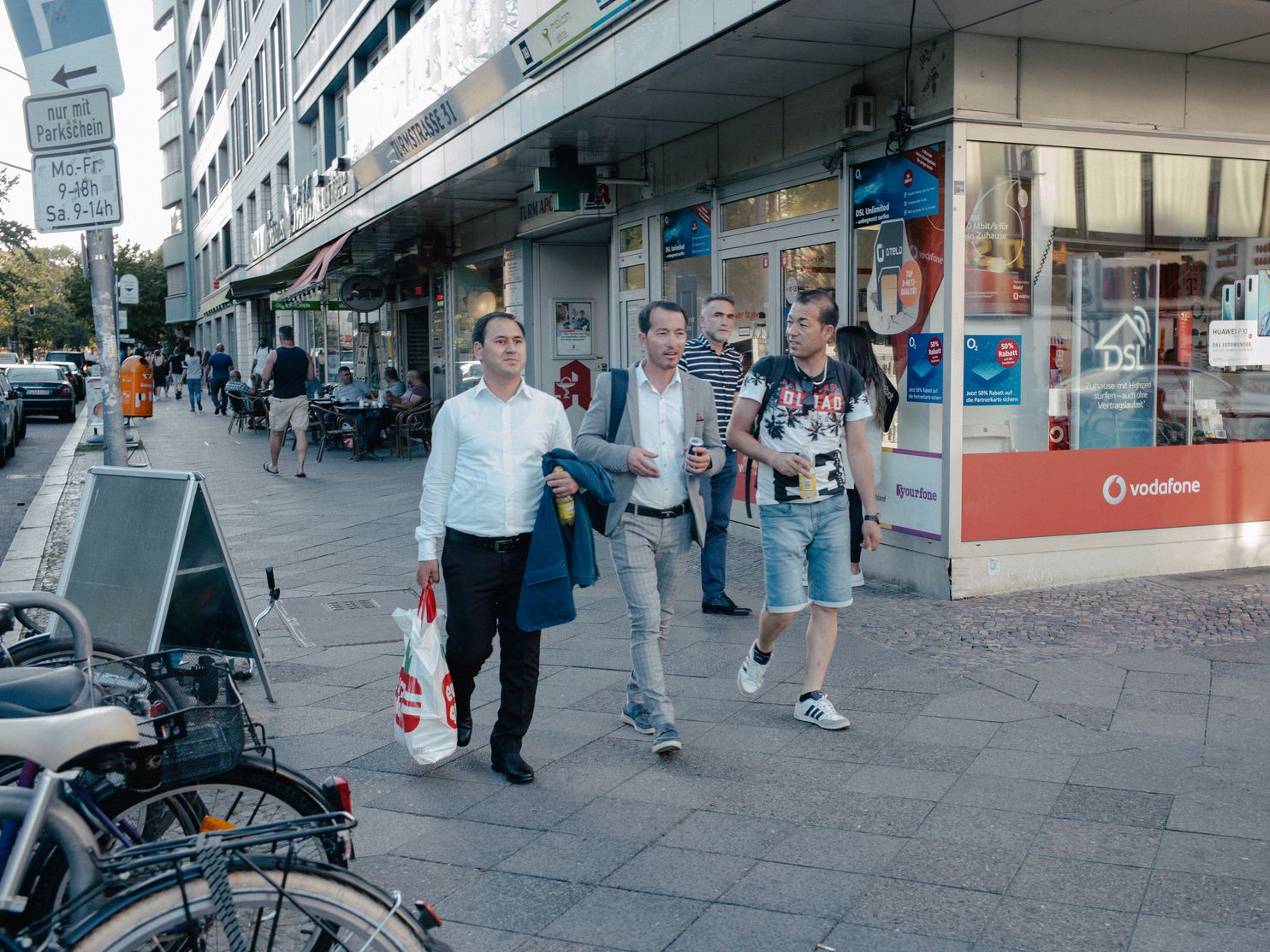 When the city’s integration council held meetings, Behzad was always there, flipping as needed among Dari, English and German to help the advisory body with its mission to smooth out tensions as the newcomers settled in. And when new members of the council were elected in May, Behzad won more votes than anyone.

‘So many problems already’

Heidi Päch would never have been one of those throwing bottles. But she was no fan of refugees, either.

Päch, 62, is a Frankfurter, born and raised. Over the decades, the city she has known and loved has, in her eyes, deteriorated beyond recognition.

The dance halls where she used to waltz, fox trot and tango have all closed. Bars she used to know have been replaced by a burger joint called XXL and an Asian restaurant she says she can’t afford.

More than anything, she said, the social cohesion that marked the communist era disappeared, as the iron curtain lifted and capitalism took hold.

“The city changed,” said the petite blonde in between puffs on a cigarette, “but not for the better.”

Then came the refugees.

Päch wasn’t one of the Germans who gathered at train stations to welcome them. She feared they would take away jobs and housing from locals. And her fears came true, she said, when her landlord delayed a much-needed renovation of her apartment to instead ready a building for the newcomers. 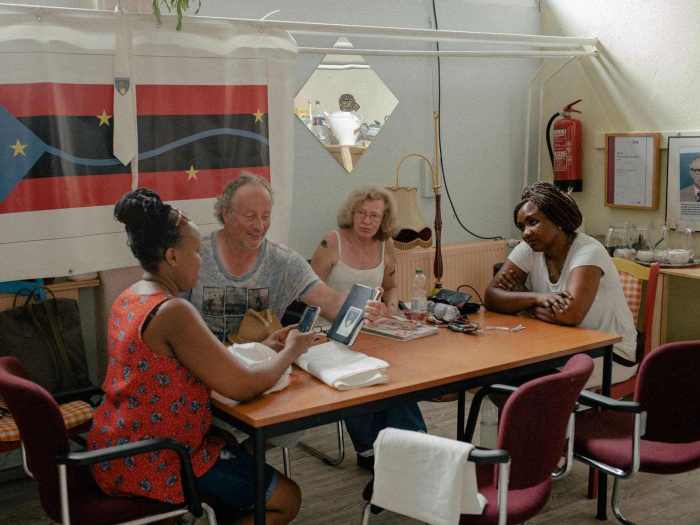 “Because of refugees I had to live in temporary housing for a year and a half,” she said. “The city had so many problems already. Refugees came along and added to them.”

When Päch ended up in legal trouble over an unpaid debt, a judge gave her a choice: Perform community service or go to jail.

And so she found herself at Brückenplatz — Bridge Place — a community center run out of an abandoned school gym.

On her first day, Päch entered through the communal gardens and into halls painted with handprints in all colors and sizes. The space echoed with foreign accents and languages, and she felt unease creeping in.

“I walked in, and there was a group of Syrian men sitting around a table,” she recalled. “I thought, ‘Oh, what am I in for now?’ ”

To her surprise, they were polite. 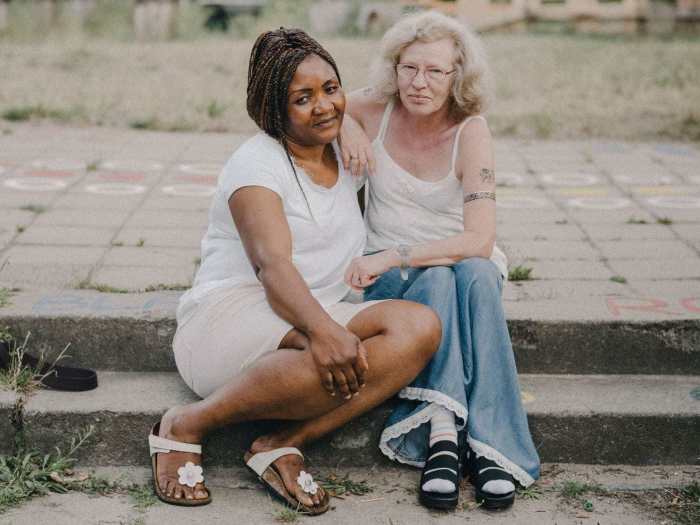 On return visits, Päch started doing arts and crafts projects with children, and she met Charlotte Tsangueu, a mother of three from Cameroon. The two women didn’t speak the same language but used their hands to communicate.

After her mandatory community service hours were complete, Päch kept coming back. She now considers Tsangueu her best friend and feels at Brückenplatz the sort of social cohesion she longs for from East German times.

“Outside of Brückenplatz, I notice a lot of bad types of refugees,” she said. “But here, there are the good types.” 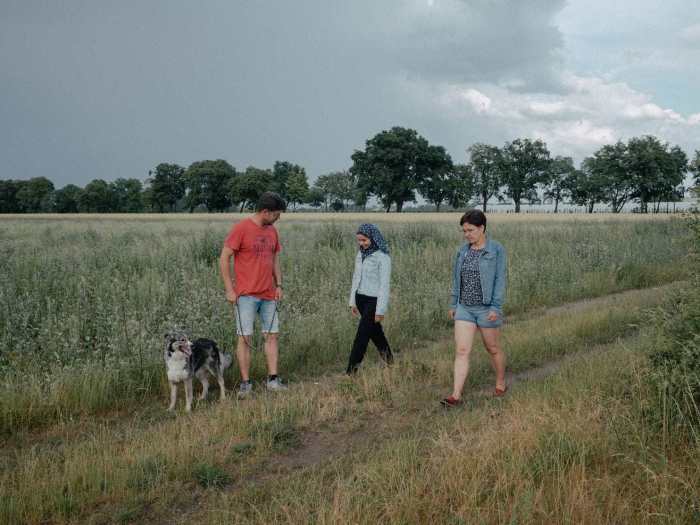 Shefaa Alfrag and her hosts Thomas Klähn and Franka Grösch go for a walk in their village outside Frankfurt. (Nanna Heitmann/For The Washington Post)

Before Shefaa Alfrag interned as a preschool teacher, she had trained to work as a secretary — and even received an offer. But with a catch.

“They said, ‘You can have the job, but you have to take off your headscarf,’ ” she said.

Yet after four years in Germany, Alfrag, 24, wasn’t entirely surprised.

No one else wears a headscarf in the pastoral area where she lives outside Frankfurt. There are not even other foreigners. Down the road, a neighbor flies the Confederate flag — occasionally used in Germany as a stand-in for other symbols of white supremacy that have been legally forbidden.

On the day Alfrag moved in with her host family, she marveled at her new surroundings, which were in every way a contrast from her native Damascus.

“We sat in the car, drove through the fields, she looked up at the sky and said ‘Look, Franka, Allah created that,’ ” said 49-year-old Franka Grösch, who, together with her partner, Thomas Klähn, has hosted Alfrag since 2015. 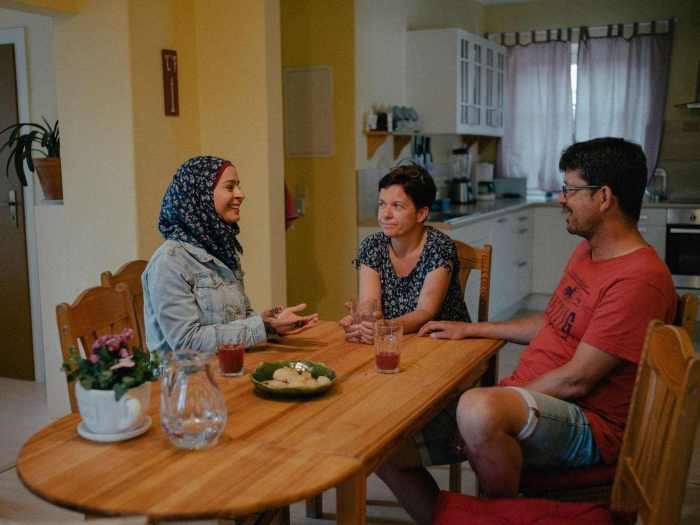 Grösch and Klähn didn’t know much about Islam when the refugees, a large percentage of them Muslim, started arriving in Frankfurt.

“People were talking badly about refugees,” Klähn said. “But no one really knew what was happening in the camps. So we went into the camps and asked people about what’s happening there and what they need.”

Klähn quit his job as an IT manager and went back to social-work school. He now volunteers at Brückenplatz, while trying to help find a location for Frankfurt’s first mosque.

“I say, ‘It’s for a mosque.’ They say, ‘No problem.’ But they never call back,” Klähn said, describing his calls to building owners.

Klähn remains an atheist. But he has been reading the Koran, and around the breakfast table, he, Grösch and Alfrag discuss Islamic teachings.

They also talk about Alfrag’s future: Will she allow her parents to arrange her marriage? And what will she do for a living?

The first question is tricky — she’s torn between two worlds — but the latter may have been answered with Alfrag’s internship as a preschool teacher.

Germany has a desperate shortage, and Alfrag showed natural aptitude. After three months, her supervisor awarded her a 1 — the highest possible grade.

Adults in Frankfurt had fixated on her hijab. But the kids barely seemed to notice.

On her last day, there was no mention of the headscarf, her accent or her faith.

Instead, the focus was on the game she brought as a farewell gift — one in which the children angled pencil-length rods into the tiny mouths of spinning plastic fish.

Their eyes on their teacher, a dozen preschoolers squirmed to claim their chance. 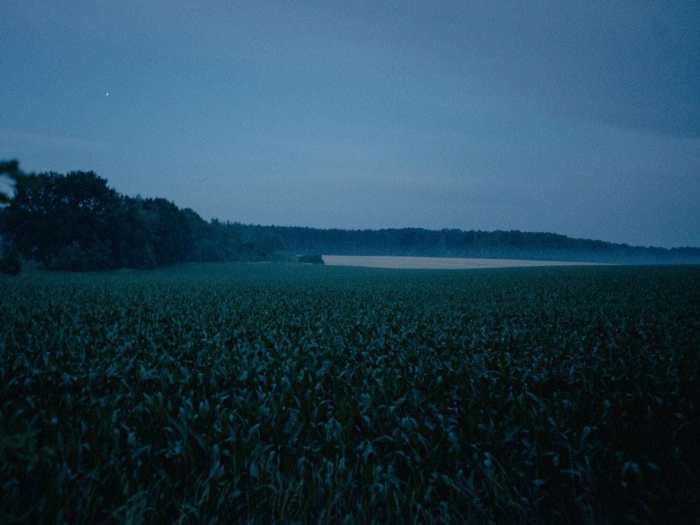 The countryside where Shefaa Alfrag lives is a world away from her native Damascus. (Nanna Heitmann/For The Washington Post)

Source: This German city had few foreigners. Then refugees changed it in some surprising ways. – The Washington Post