When completed, the Thirty Meter Telescope on Mauna Kea’s summit is expected to be the largest telescope in the Northern Hemisphere. But its construction has drawn heated opposition.

Officers with the Hawaii Department of Land and Natural Resources prepare to arrest protesters blocking an access road on Mauna Kea. Organizers said they want to halt construction of a giant telescope on the summit to protect sacred land.CreditCreditCindy Ellen Russell/Honolulu Star-Advertiser, via Associated Press

Construction was set to begin this week on a giant telescope on the barren summit of Mauna Kea, a volcano on Hawaii’s Big Island, considered the best observatory site in the Northern Hemisphere.

The project, however, has long drawn the opposition of those who say it would desecrate the mountain’s sacred ground.

On Wednesday, that opposition had a new face: About 30 Hawaiian elders were arrested as they blocked a road leading to Mauna Kea’s summit to halt the construction, organizers said. They described an emotional but peaceful scene as the elders, who were sitting under tents on the road, were escorted by police officers to nearby white vans while dozens of other protesters chanted and cried. Some had to be carried.

“We have come to the point in time where enough is enough,” Leilani Kaapuni, one of the elders, said in a phone interview. She said she was arrested for obstruction of a government road but later returned to the blockade. “This mountain is sacred,” she said.

A state spokesman confirmed the arrests, but the authorities could not immediately provide numbers of how many were arrested and what charges they might face. Later Wednesday, Gov. David Ige, a Democrat, said at a news conference that he had issued an emergency proclamation that would allow the authorities to better manage roadways and cordon off certain areas on the mountain.

He said the protests had created a dangerous situation, that roads were being illegally occupied and that the state would work to ensure the telescope’s construction could begin.

With a primary mirror bigger than a basketball court, the Thirty Meter Telescope, which is expected to be the largest in the Northern Hemisphere, has faced opposition for a decade.

Astronomers say the telescope would be able to study planets around other stars and peer into black holes in distant galaxies better than the Hubble Space Telescope. It would be built by an international partnership called the TMT International Observatory, led by the University of California and the California Institute of Technology, but also including Japan, China, India and Canada.

Over the years, activists have staged protests and filed lawsuits to halt the telescope’s construction. Thirteen major telescopes already exist on the summit, and some have said that decades of telescope building on Mauna Kea has negatively affected cultural and religious practices.

Last week, a coalition of activists filed a legal challenge in the Third Circuit Court of Hawaii, seeking an injunction against the telescope’s construction.

Protesters had gathered on the road since Friday, after Governor Ige’s July 10 announcement that construction on the telescope would begin this week. 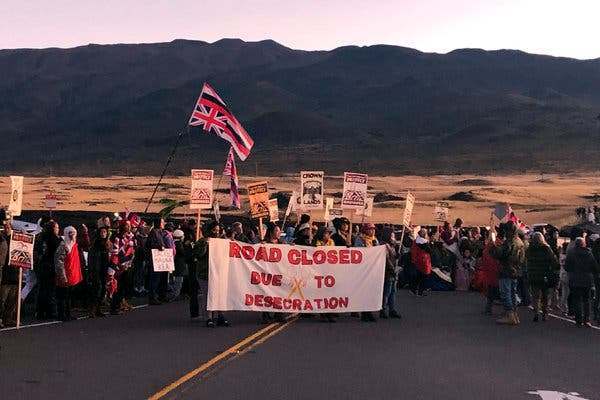 It’s not clear how that timeline would be affected by the blockade, and Mr. Ige said at the news conference Wednesday that there was no concrete date by which construction was expected to begin.

“I think we are looking at being able to provide safe access of equipment to the site, and we are committed to do that,” he said.

As of late Wednesday afternoon, thousands of protesters were still in the area, organizers said, with some blocking the road. It’s unclear whether more arrests are expected.

Kealoha Pisciotta, a protest organizer, said that she and other opponents do not intend to leave the road until the project is halted. She said Wednesday’s arrests were “extremely difficult to watch.”

“They are our elders,” she said. “They decided rather than having to see their young children and young people being arrested that they were going to take the arrests. They asked everyone to abide by their will to do this, on behalf of the people.”