The former president is appearing before a high-profile commission of inquiry into corruption during his time in office. 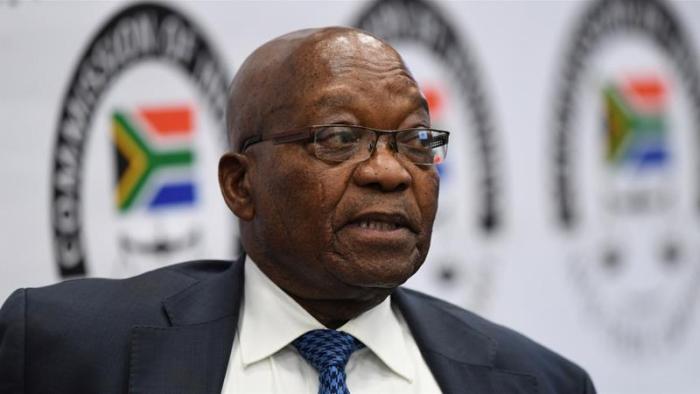 Cape Town, South Africa – On Monday, after almost a year of explosive hearings, former South African president Jacob Zuma has finally appeared before a high-profile commission of inquiry looking into the alleged rampant state corruption he presided over during his nine-year tenure.

South Africans have keenly awaited the 77-year-old’s televised testimony, which is due to last until Friday, since he stepped down in February 2018 amid mounting pressure from the ruling African National Congress (ANC) and civil society protests.

Previous witnesses before the commission, including former cabinet ministers, have painted a vivid picture of Zuma’s supposed role in what has come to be known locally as “state capture”, whereby private interests, including the controversial Gupta brothers, have bought undue influence over the issuance of state contracts and even government positions.

In May 2018, Public Enterprises Minister Pravin Gordhan was quoted as saying that he “speculated” state capture may have cost South Africa upwards of $7bn; some economists have since the put the number higher.

The establishment of the judicial commission of inquiry into state capture, which is led by Deputy Chief Justice Raymond Zondo, was proposed as a remedial action in a damning 2016 report by then-Public Protector Thuli Madonsela. The commission began proceedings in August last year and is due to complete its mandate by March 2020.

Since he first came to power in 2009, Zuma has faced allegations by political opponents, civil-society organisations and in the media of decimating government institutions, in part through appointing unqualified lackeys to senior positions, in an effort to facilitate the looting of state coffers. He’s also been accused of using taxpayer money to fund elaborate upgrades to his private residence in the province of KwaZulu-Natal.

Zuma has repeatedly denied any wrongdoing.

While this is an inquiry and not a trial, Zuma, who consistently evaded legal prosecution before and during his presidency, is due to stand trial on fraud and corruption charges later this year for his alleged role in a multibillion-dollar arms scandal in the late 1990s.

President Cyril Ramaphosa, who replaced Zuma as interim president and went on to win a general election in May last year, has repeatedly promised to stamp out state corruption.

But Zuma’s testimony to the commission has thus far been vague and evasive, frustrating the public’s desire for accountability, according to Ina Gouws, a senior lecturer in politics at the University of the Free State.

“People want the truth and we want him to take responsibility, but he doesn’t seem to care,” she argued. “He is taking the idea of plausible deniability way too far.”

On the first day of his appearance, Zuma denied corruption allegations and said that there had been a decades-long plot against him that had involved assassination attempts – including a suicide bombing that was planned to take place at a public event in Durban in March – and unnamed foreign intelligence agencies.

In a tortuous opening statement that lasted almost three hours, the former president argued that the commission was the culmination of the various conspiracies against him and was intended to be “the grave of Zuma”.

He claimed that the very concept of state capture had been exaggerated by the commission in a bid to vilify him.

Zuma also alleged that Ngoako Ramatlhodi, a former mineral resources minister who had testified against him earlier during the commission, was a spy for the former apartheid government.

But Zuma also made veiled threats that he would expose other senior ANC officials, referring to “lists” in his possession, threatening to exacerbate rifts within the ruling party and undermine the commission.

At the start of the second day of proceedings on Tuesday, Zuma told the commission that after Monday’s testimony, his personal assistant had received death threats against the former president and his children.

Other inquiry witnesses have also claimed that their lives were under threat as a result of their testimony.

Zuma then repeatedly denied knowledge of or claimed to not recall events pertaining to the various allegations against him.

The third day of proceedings on Wednesday was characterised by further evasions and denials by Zuma, as well as more claims from his legal team that he had been brought before the commission “under false pretences” and was being unfairly cross-examined rather than being given a chance to present his version of events.

“Zuma’s aim is to paint a picture that exonerates him and one that also throws the commission into a crisis of legitimacy. He will try to implicate others, because he knows many of his comrades are not beyond reproach, while avoiding specific details concerning himself,” political analyst Ralph Mathekga told Al Jazeera.

Despite the allegations against him, Zuma, a stalwart of the anti-apartheid struggle, continues to command significant support from certain senior ANC members, as well from sections of South Africa’s citizenry.

Throughout his testimony thus far, thousands of supporters have massed outside the venue, chanting his name.

On Monday, Carl Niehaus, spokesperson of the ANC military wing’s veterans association, which has stood by Zuma, handed over a memorandum asking the commission to expand its mandate beyond “targeting certain people for factional or political reasons”.

Mathekga, the analyst, agreed that the commission has placed too much emphasis on Zuma.

“There is a danger that the commission will begin to look like a witch-hunt, and even if they are going after a bad witch, a witch-hunt is still a witch-hunt,” he said.

“Zuma needs to be held accountable, but there is no requirement to stop at him and not adequately assess the entire structure.”

For Gouws, the lecturer, there is also a risk that the commission is giving Zuma a prominent platform to sway public opinion by launching unsubstantiated attacks on those discrediting him and painting himself as the victim.

“As soon as he starts to name more names, you will see some ANC members come forward in support of him but under the guise of broader ANC interests. There is no doubt in my mind that the chasms that are already there within the party and society will grow wider as a result of his testimony,” she told Al Jazeera.

“I think eventually Zuma will try to discredit Ramaphosa himself, so the president needs to be ready for that.”

But some political commentators say Zuma’s appearance at the commission will have long-term positive effects for South Africa’s democracy.

“We can’t take this for granted, it is a huge shift and I think it is a positive one,” political analyst Thokozani Chilenga-Butao told a local radio station on Monday.

“We can expect that in future if there are other people in higher positions that need to be held accountable they will not have an excuse to say I am not going to appear or I can’t be subpoenaed.”

But Gouws maintains that “what the commission then does with the evidence and the testimony that is presented is going to be the most significant part of the process. Once the commission is finished, efforts and resources need to be put into capacitating the National Prosecuting Authority. There must be real consequences for the enormous damage that Zuma has done to the country.”