Oil prices have slipped sharply from their recent peaks on signs of surging US supply and slowing global demand CREDIT: MARY ALTAFFER/AP

“Opec might die,” admitted Iranian oil minister Bijan Zanganeh to a pack of reporters at the crude cartel’s meeting in Vienna last week. “It has lost its authority and it is on the verge of collapse.”

The oil price barely flinched after the 14-nation group announced a nine-month extension to production cuts propping up prices.

Opec’s market-moving power appears to be waning and forecasters expect its share of global production to sink to its lowest level in almost three decades.

In a sign of its slipping grip on the market, the latest price-boosting measures appeared to be pre-announced by Russian president Vladimir Putin at the G20 summit in Japan the weekend before the Opec meeting.

Putin revealed that Russia, a country not in Opec, had agreed with cartel kingpin Saudi Arabia to extend the output caps. “I believe Opec is going to die with these processes,” warned Zanganeh on the rising dominance of Russia and arch-rival Saudi Arabia.

The group which includes major producers such as Saudi Arabia, Iran, Iraq and Venezuela brings together regional foes, two-fifths of global crude production and more than 80pc of the world’s proven reserves with the common aim of controlling oil prices to maximise market share and revenue.

Since 2016, Opec has restricted supply to balance the delicate balance of the market with the help of top non-Opec suppliers, such as Russia.

Prices have recovered from the depths hit in the oil market crash but Opec appears to be providing a crutch it is now struggling to remove.

While prices have rebounded back above $60 per barrel following their collapse, they have slipped sharply from their recent peaks on signs of surging US supply and slowing global demand. 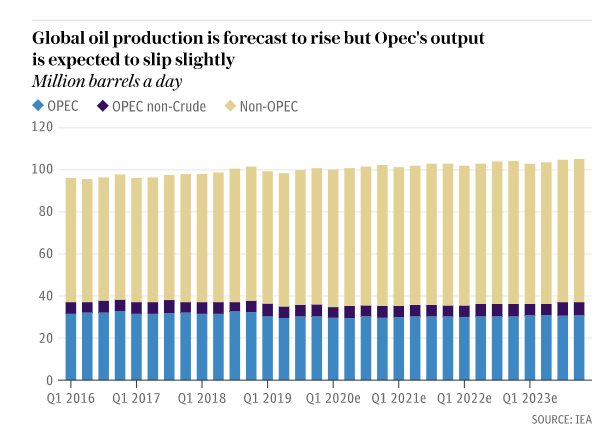 Jostling reporters and television crews packed into the cartel’s headquarters in the Austrian capital last week, but few doubted that Opec and its allies would extend the production caps.

“Without Russia Opec is lost,” says John Hall, chairman of consultancy Alfa Energy. “Without Saudi Arabia and Russia working together, Opec will not survive.” He adds: “Having Russia as a partner is very, very important.

Russia will not be a party to anything it does not control and for that reason it has not joined as a member because as a member it would be beholden to the other members to agree what to do.”

Opec has seen its stranglehold on the oil market loosen as prices have recovered. The balance of power on the market appears to be shifting from the Middle East to the US.

Despite the extension to the cuts, prices edged lower last week on fears that the oil cartel’s attempts to support the market are being overpowered by a glut of US supply as the outlook for global demand darkens.

Another shale boom in the oil-rich Permian Basin in the US has pushed up American supply up to record levels. Shale producers were forced out of the market by the oil price crash but have come back leaner and profitable at lower crude prices.

The stabilisation in the oil market has seen shale drillers flood back, offsetting barrels lost from Opec’s production cuts and tumbling supply from Venezuela and Iran. The break-even price on a barrel of oil from the Permian Basin, in Texas and New Mexico, has tumbled to below $50 per barrel.

Squeezing them out of the market again will be a more daunting prospect for Opec. UBS predicts that Opec’s market share of the “liquids market” will decline to about 35pc in the second half of the year, down from almost 40pc in 2016.

Its share of the crude market is expected to dip below 30pc for the first time since 1991, Bloomberg calculated. “This is  a highly influential but not dominant status,” says Jon Rigby, an analyst at the bank.

“There is a delicate pathway to identify that doesn’t see market share decline inexorably, either as competing sources of supply take advantage of artificially high pricing or demand growth weakens,” he argues.

However, Opec “remains a key swing supplier” despite the drop-off in market share.  Some distance north west of the Permian Basin, Washington is also playing an unconventionally active role in moving the oil market. 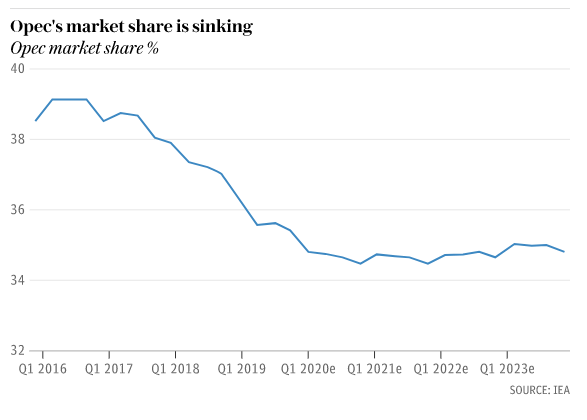 Donald Trump has repeatedly put pressure on Opec to keep prices lowdespite the US president himself boosting oil by knocking supply from major producers with sanctions.

Last year he described a drop in prices as a “tax cut for America and the world” amid hopes that low prices at the pump will lead to more votes at the ballot box.

The US president has been keen to keep Saudi crown prince Mohammed Bin Salman under his wing, sticking by the controversial leader even after the murder of journalist Jamal Khashoggi in the Saudi counsulate in Istanbul sparked international outrage.

Trump is also inadvertently driving global demand for oil lower, stoking worries over a glut of supply. The US-China trade war has weighed on the world economy in 2019, forcing Opec last month to trim its forecasts for demand growth amid slowdown fears.

“What they [Opec] didn’t reckon on is that America would suddenly turn up with Trump and another four million barrels of oil to go into the market,” explains Hall. “They have managed to manipulate the market for two years.

As the American oil comes into the market it is going to put them under greater pressure and my question is: ‘you are having to cut back to make up for increased product in the market from America, how much longer can you carry on doing this?’.”

With US supply soaring as demand dwindles, Bjarne Schieldrop, chief commodities analyst at SEB, warns that the oil market is heading for a “very bearish moment” when Venezuela and Iran are able to raise production again.

US sanctions have crippled Iran’s oil exports, a key source of revenue for Tehran, while Venezuelan supply has been decimated by the country’s economic collapse.

“When you look at the volumes lost by Iran and Venezuela they are huge, there is no way in hell that Russia, Saudi Arabia, United Arab Emirates and Kuwait would cut back production to make room for the reentry of Iran and Venezuela.

“It is going to happen eventually but we don’t know when.” He believes that Opec could easily regain its grip on the oil market if needed. “The common denominator is that they have the cheapest oil in the world,” Schieldrop says.

“It is no problem for Opec and Russia to recapture their market share because they have the cheapest oil.” The group can just drive down the price to halt more expensive drilling in non-Opec countries when Iranian and Venezuelan supply returns, he explains.

However, the SEB analyst warns that the return of those lost barrels of oil “will not happen any time soon”.  While the oil cartel may have temporarily lost its authority in the market, its members are more than comfortable with crude prices bobbing around the $60 to $70 a barrel range.

They are in the knowledge that they could take the painful step of crashing prices to seize back control of the oil market. But for now, the gaze of traders will remain fixed on the US rather than Vienna.

Source: Is oil price cartel Opec on the verge of collapse?