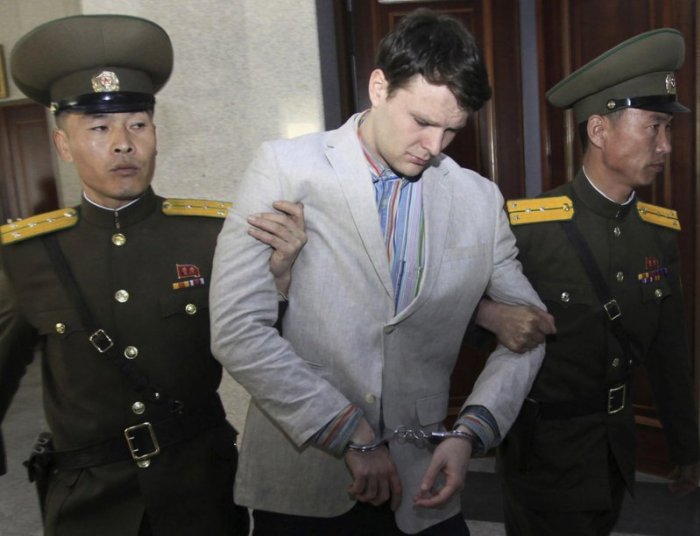 In this March 16, 2016, file photo, American student Otto Warmbier, center, is escorted at the Supreme Court in Pyongyang, North Korea.

NEW YORK (AP) — The parents of Otto Warmbier have filed a claim for a seized North Korean cargo ship, seeking to collect on a multimillion-dollar judgment awarded in the American college student’s death.

The Warmbiers filed court papers Wednesday in New York federal court saying they have a right to the assets after North Korea failed to respond to a wrongful death claim that accused it of abducting Warmbier, who had traveled there for a guided tour ahead of a study abroad program in Hong Kong.

The Warmbiers say their son was tortured after being convicted of trying to steal a propaganda poster and imprisoned for months.

He suffered severe brain damage, but doctors were unable to determine was led to it. The 22-year-old died days after being returned to the U.S. in a vegetative state in 2017.

“The Warmbiers are committed to holding North Korea accountable for the death of their son Otto, and will work tirelessly to seize North Korean assets wherever they may be found,” Ben Hatch, an attorney for the family, said in an emailed statement.

North Korea has rejected accusations by relatives that it tortured Warmbier and said he was provided “medical treatments and care with all sincerity.”

President Donald Trump has condemned Warmbier’s treatment but said earlier this year he did not believe North Korea’s leader, Kim Jong Un, knew about it or would have allowed it to happen.

North Korea did not respond to the wrongful death lawsuit that accused it of detaining Warmbier at the Pyongyang airport “in an attempt to extract various concessions from the United States government.”

In the latest court filings, Warmbier’s parents claim a right to the North Korean cargo ship, which the U.S. seized in May because it was carrying coal in violation of U.N. sanctions.

The vessel, North Korea’s second-largest cargo ship, was first detained in April 2018 by Indonesia while transporting a large amount of coal. The U.S. later announced it had seized the 17,061-ton carrier in a first-of-its kind enforcement that came amid a tense moment in relations with North Korea.