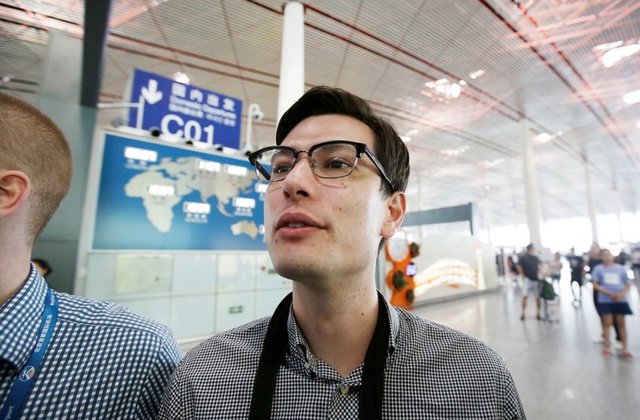 An Australian student Alek Sigley, 29, who was detained in North Korea, departs from Beijing to Japan, at the Beijing international airport, China, July 4, 2019. REUTERS/Jason Lee

SEOUL (Reuters) – North Korea’s state news agency said on Saturday an Australian student who was expelled from the country after 10 days’ detention had committed “spying acts” through his work with foreign media.

Alek Sigley, who had been held in North Korea since June 25, was an active social media user and also a regular contributor to international media organizations including NK News about his time in North Korea.

“Investigation revealed that at the instigation of the NK News and other anti-DPRK media he handed over several times the data and photos he collected and analyzed while combing Pyongyang by making use of the identity card of a foreign student,” the North’s Korean Central News Agency (KCNA) said.

His latest post, uploaded on April 30, describes his dining experiences in Pyongyang, according to the NK News website.

“The six articles Alek published represent the full extent of his work with us and the idea that those columns, published transparently under his name between January and April 2019, are “anti-state” in nature is a misrepresentation which we reject,” Chad O’Carroll, CEO of NK News publisher the Korea Risk Group, said in a statement.

“Alek Sigley’s well-read columns presented an apolitical and insightful view of life in Pyongyang which we published in a bid to show vignettes of ordinary daily life in the capital to our readers,” O’Carroll added.

KCNA said Sigley admitted his “spying acts” and repeatedly asked for a pardon. It added that he was expelled from North Korea on Thursday.

On Friday Sigley said he was safe and well in Tokyo and intended returning to normal life. He did comment on the reason for his detention or on what happened to him in Pyongyang.