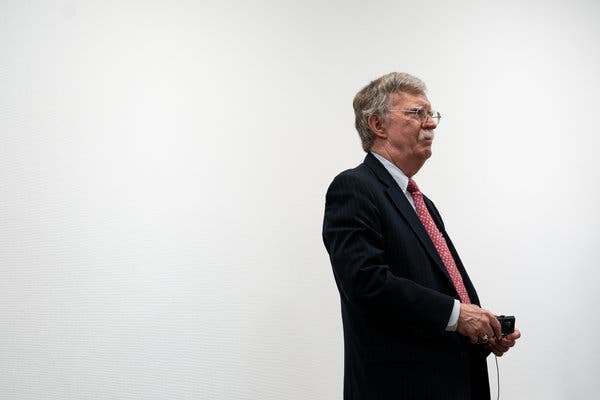 WASHINGTON — As President Trump reveled in his historic weekend stroll into North Korea, administration officials were sharply at odds on Monday over what demands to make of Kim Jong-un, the North Korean leader, while preparing to restart negotiations on a nuclear deal.

Pushing an internal debate into the open, John R. Bolton, the national security adviser and the most prominent hawk in the administration, reacted angrily to a report in The New York Timesabout the possibility of a deal to effectively freeze North Korea’s nuclear activity in return for American concessions.

Some officials are considering a freeze as a first step toward a more comprehensive agreement for Mr. Kim to give up his entire nuclear program. Mr. Bolton has long insisted that the North Koreans dismantle their nuclear program and give up their entire arsenal of warheads before getting any rewards.

“This was a reprehensible attempt by someone to box in the president,” Mr. Bolton wrote on Twitter. “There should be consequences.”

But some senior administration officials have been discussing the idea of an incremental approach under which North Korea would first close down its nuclear facilities to prevent it from making new fissile material, in effect freezing its program but leaving its existing arsenal in place.

In exchange, the Americans would make some concessions that would help improve the living conditions in North Korea, which is under heavy sanctions, or strengthen relations between Washington and Pyongyang.

Among those considering such ideas are senior diplomats, say people familiar with the discussions.

Mr. Trump, eager to burnish his self-constructed image as a dealmaker in the run-up to the 2020 presidential election, appears open to embracing a step-by-step process. Mr. Trump did not publicly mention full denuclearization during his hour at the border between the two Koreas on Sunday or after talks with South Korean leaders.

In April, during a visit to the White House by President Moon Jae-in of South Korea, Mr. Trump signaled that gradual concessions by both sides might be necessary.

“There are various smaller deals that could happen,” he said. “You could work out step-by-step pieces, but at this moment, we’re talking about the big deal. The big deal is we have to get rid of nuclear weapons.”

American officials involved in North Korea policy assert, even in private, that the administration’s long-run goal has been consistent all along: to have Mr. Kim, with whom Mr. Trump met at the border on Sunday, give up all of his nuclear weapons and the ability to build more.

In the short run, Mr. Trump’s public comments — and the showmanship of going to the Demilitarized Zone and stepping over a low concrete barrier to walk with Mr. Kim on his soil — is another sign of the limited influence of Mr. Trump’s most hard-line advisers. Mr. Bolton was not at the meeting in North Korea but on a scheduled trip to Mongolia. Last month, Mr. Trump at the last minute rejected Mr. Bolton’s urging for a military strike on Iran.

On Monday, after Mr. Bolton made his statement, Mr. Trump spoke effusively on Twitter about his weekend trip to the Koreas without disputing the possibility of a step-by-step approach. “While there, it was great to call on Chairman Kim of North Korea to have our very well covered meeting,” he tweeted. “Good things can happen for all!”

Mr. Trump has given Secretary of State Mike Pompeoresponsibility for restarting negotiations, which had stalled after a failed February summit in Hanoi, Vietnam, between Mr. Trump and Mr. Kim.

It was the second time the two had met, and Mr. Trump at the time had insisted that Mr. Kim give up his entire nuclear program, including an estimated 30 to 60 warheads, in exchange for sanctions relief. 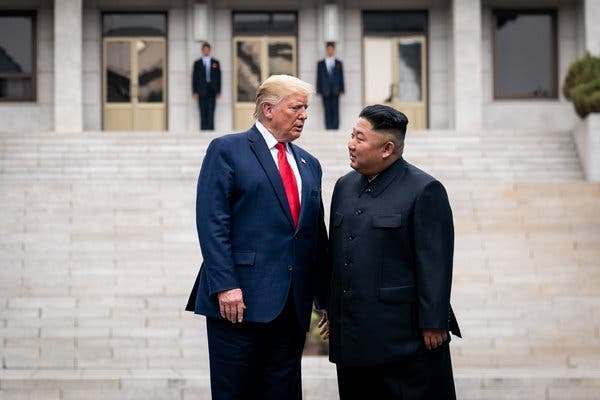 Mr. Bolton and Mr. Pompeo had both urged the president to settle for nothing less than a grand deal, but Mr. Pompeo now appears open to considering a gradual approach.

The State Department declined to comment on Monday. On Sunday night, Stephen E. Biegun, the United States’ special representative for North Korea, told The Times that its account of the ideas being discussed in the administration were “pure speculation” and that his team was “not preparing any new proposal currently.”

Some analysts said any approach must start with the United States and North Korea committing to a common definition of denuclearization. Without an ironclad definition, there is greater risk the North Koreans could back out of an interim deal, as they have done under previous American administrations, they said.

“There’s a myriad of ways that North Korea can pull it back,” said Jung H. Pak, a former C.I.A. analyst who is now a senior fellow at the Brookings Institution.

For months after the meeting in Hanoi, there was no senior-level contact between Washington and Pyongyang, then Mr. Trump and Mr. Kim exchanged letters.

That paved the way for Mr. Trump’s Twitter post from the G20 summit in Japan on Saturday, in which he said he would like to see Mr. Kim during a scheduled visit Sunday to the Demilitarized Zone, on the border between the two Koreas, to shake Mr. Kim’s hand and to “say Hello(?)!”

Mr. Pompeo and other officials scrambled to organize for a potential meeting. Mr. Trump asked Mr. Pompeo to accompany him to the heavily guarded border village of Panmunjom, along with Ivanka Trump and Jared Kushner, his eldest daughter and his son-in-law. Mr. Bolton notably flew to Mongolia instead. “Delighted to be in Ulaanbaatar,” he said on Twitter above a photograph of him smiling with the country’s secretary of state, Davaasuren Damdinsuren.

Though Mr. Pompeo is often aligned with Mr. Bolton on an aggressive approach to national security issues — Mr. Pompeo has also advocated a strike on Iran — the secretary of state is acutely attuned to Mr. Trump’s desires and has tried diplomacy with the North Koreans when commanded by the president.

In interviews and talks in recent weeks, Mr. Pompeo has not mentioned his earlier insistence that North Koreans must first turn over a complete list of nuclear assets, which some experts say is a necessary first step to establishing baselines for full denuclearization.

Administration officials say Mr. Biegun has been trying to come up with creative ways to get North Korea to at least agree with the Americans on a common definition of denuclearization and to start the process of shutting down its program. American intelligence officials have assessed that Mr. Kim will probably never give up all of his nuclear weapons.

That is where serious consideration of a step-by-step process comes in.

In January, during a speech at Stanford University, Mr. Biegun signaled that American negotiators might be willing to push off the demand for an inventory of nuclear assets and engage in a more gradual process. “Sequencing always confounds negotiators,” he said.

Mr. Trump’s grand-deal gambit in Hanoi upended that thinking. But that summit’s failure has left the door open for other ideas. Negotiators are back at a new starting line, essentially the same place they were after Mr. Trump and Mr. Kim’s first summit, held in Singapore in June 2018.

Doing a yearslong gradual process with a freeze on activity as the initial goal would amount to tacit acceptance of North Korea as a nuclear state. But American officials in both the White House and State Department say sanctions would not be lifted until North Korea completely gets rid of its nuclear weapons and its program. That includes the five sets of sanctions imposed by the Obama and Trump administrations starting in 2016 that North Korean officials say they most want the United States to cancel. In Hanoi, Mr. Kim made this demand of Mr. Trump.

For now, American officials might consider allowing more robust humanitarian aid to enter North Korea or some limited economic exchanges between the North and South, which under Mr. Moon has been pushing forward on an inter-Korean peace process. The two sides could also open interests offices in each other’s capitals.

In the approaches under consideration, those concessions would happen only if North Korea agrees to halt all its uranium enrichment — not only at Yongbyon, the central site of its nuclear program, but also at Kangson, another site known to American officials.