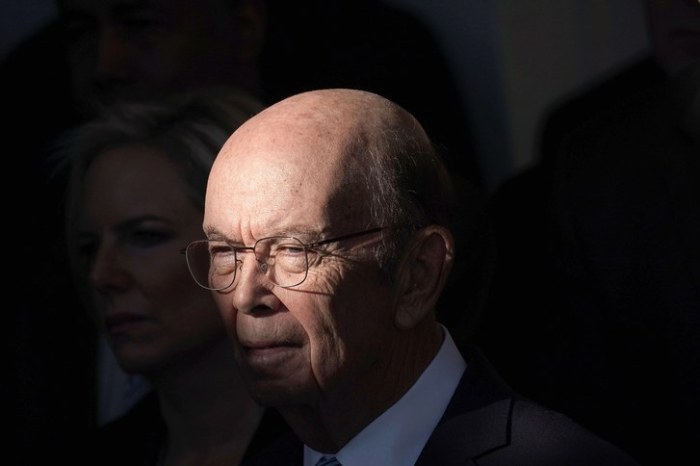 Newly discovered documents may show that Commerce Secretary Wilbur Ross’s intent was discriminatory when he decided to add a citizenship question to the 2020 census.Photograph by Alex Wong / Getty

Earlier this month, the House Oversight Committee held a hearing on Capitol Hill to consider whether to hold Commerce Secretary Wilbur Ross in contempt for refusing to release documents related to the TrumpAdministration’s addition of a citizenship question to the census. Representative Alexandria Ocasio-Cortez, the New York Democrat, said that the recent release of documents written by a deceased Republican operative revealed that the true motivation behind the change was to undercount minorities in the census and shift power to Republicans. “I want to know why this question was magically added after we have seen that a political operative knew and detailed an intent to intimidate racial and immigrant communities for a partisan purpose, saying, ‘This will hurt Democrats and help Republicans,’ ” she said in remarks that quickly went viral. “I want to know about the racism and the very disturbing history that we’re seeing here. That’s what I want to know.”

The Supreme Court, which is set to rule any day now on the legality of Ross’s decision to contradict Census Bureau experts and push ahead with a citizenship question, wasn’t asked to address whether racism played a role in the Trump Administration’s desire for a question in the 2020 count. At its heart, the legal dispute is one about federal administrative law—that is, whether Ross’s work with Trump appointees in the Justice Department to create a legal justification for adding a citizenship question was arbitrary and capricious under the Administrative Procedure Act. Three federal judges so far, including the one whose ruling the Supreme Court is reviewing, have said that Ross acted improperly under federal law. But lower-court judges declined to rule against the government on the issue of willful discrimination against minorities, which requires proof that Ross intended to disfavor people of color on the basis of race.

Few claims in constitutional law are as charged as the accusation that the government took actions designed to discriminate against minorities. But that’s precisely what advocates in New York and Maryland did in legal challenges they filed last year to the Administration’s decision to include a citizenship question in the census questionnaire that will be sent to households next year. “The inclusion of a citizenship question in the decennial Census violates the equal protection guarantee of the Fifth Amendment because it is motivated by racial animus towards Latinos, Asian Americans, and animus towards non-U.S. citizens and foreign-born persons,” the plaintiffs alleged in a lawsuit seeking, among other things, a declaration that the question is unconstitutional. New York plaintiffs, in their own complaint, filed last year in federal court, contended that Trump Administration officials “maintain animus toward these groups and intend, inter alia, to diminish the political power and influence of these groups and to reduce the levels of federal and state funding, benefits, and other resources that these groups receive.”

This past October, the Supreme Court delivered an early victory to the Administration. It blocked attempts to put Ross under oath, which could have helped challengers probe the secretary’s true motives for adding the citizenship question. Lower courts subsequently ruled that the challengers lacked adequate evidence to prove their claims of discriminatory intent by Ross. In an extensive ruling otherwise striking down the citizenship question, U.S. District Judge Jesse Furman wrote, in January, that the New York challengers “did not carry their burden of proving” that Ross “was motivated by invidious discrimination and thus that he violated the equal protection component” found in the Constitution.

Similarly, in Maryland, U.S. District Judge George Hazel called Ross’s actual rationale for adding the question “a mystery,” while ruling against the secretary under the Administrative Procedure Act and the Constitution’s enumeration clause, which imposes the census requirement every ten years. Not surprisingly, the issue of discrimination didn’t come up when the Supreme Court heard oral arguments in the census case in April.

But the recent discovery of a trove of files from the deceased Republican operative and redistricting expert Thomas Hofeller may force the Court to address the issue. The documents that Hofeller’s estranged daughter found on backups of the noted Republican mapmaker’s laptop have since been brought to the attention of both the New York and Maryland judges, and the Supreme Court is also aware of it. Hofeller, the documents show, conducted a private study in 2015 which concluded that a citizenship question would decrease the political power of Latinos and “be advantageous to Republicans and Non-Hispanic Whites” in the redistricting process; he also wrote that employing citizenship data derived from the census “can be expected to provoke a high degree of resistance from Democrats and the major minority groups in the nation.” Hofeller later urged the Trump Administration to adopt a citizenship question and helped craft its public legal argument that the Census Bureau needed citizenship data to better enforce the Voting Rights Act of 1965.

In constitutional litigation, that’s as close to a smoking gun of discriminatory motive as a plaintiff could hope for in court. In a ruling on Monday, Hazel opened the door to revisiting his earlier ruling in the Maryland case and allowing for an examination of whether a desire to target Latinos was a motivating factor for adding the citizenship question. The “new evidence,” Hazel wrote, “potentially connects the dots between a discriminatory purpose—diluting Hispanics’ political power—and Secretary Ross’s decision. The evidence suggests that Dr. Hofeller was motivated to recommend the addition of a citizenship question to the 2020 Census to advantage Republicans by diminishing Hispanics’ political power.” Hazel added that “as more puzzle pieces are placed on the mat, a disturbing picture of the decisionmakers’ motives takes shape.”

The Trump Administration, for its part, has argued that relitigating this part of the case is “unwarranted” in light of the looming deadline to print census forms and the Supreme Court’s imminent ruling.

Now a mini-skirmish over whether discrimination infected the process of adding a citizenship question has landed in the Supreme Court. On Monday, in yet another eleventh-hour filing, the Justices were notified of Hazel’s ruling, which the New York plaintiffs said were “changed circumstances” worthy of the Court’s attention. And on Tuesday, the U.S. Court of Appeals for the Fourth Circuit gave Hazel yet another boost, giving him the go-ahead to examine the new evidence—plus some guidance on how to weigh it. “In addressing and resolving those matters,” U.S. Circuit Judge James Wynn wrote, “the district court should keep in mind that discriminatory intent need not be proved by direct evidence.” Wynn has experience with cases alleging similar discrimination; in 2016, he was a member of a three-judge panel that found that Republicans in North Carolina enacted a voting law that targeted “African Americans with almost surgical precision.”

In a surprise filing late on Tuesday, the Trump Administration invited the Supreme Court to consider the question of racial discrimination. Noel Francisco, the Department of Justice’s Solicitor General, fired off his own letter to the Court, urging a final resolution of the claim that the expert’s files are evidence of racist motives in Ross’s decision-making process. According to Francisco, the Justices should “make clear that the administrative record, the extra-record evidence, and the Hofeller files do not, individually or together, provide any basis for setting aside the Secretary’s decision on the grounds that it violates principles of equal protection.”

The Supreme Court now faces the choice of taking the Justice Department up on this latest offer, which the Maryland plaintiffs, whose case isn’t formally before the Justices, have decried as “an utter disregard for due process.” The Court, which is expected to rule in the case on Thursday, can decide that it lacks the benefit of full briefing and arguments from both sides on a critical issue and let the lower courts hash it out. Or it can simply look the other way and rule however it planned to before the spectre of racism reached its doorstep. The choice is stark. And with the next decade of congressional apportionmentand funding for various states with rich immigrant communities on the line, how the Justices choose will affect Americans’ views of whether the country’s highest court remains a nonpartisan arbiter of justice.

Source: Is There Racist Intent Behind the Census Citizenship Question? | The New Yorker