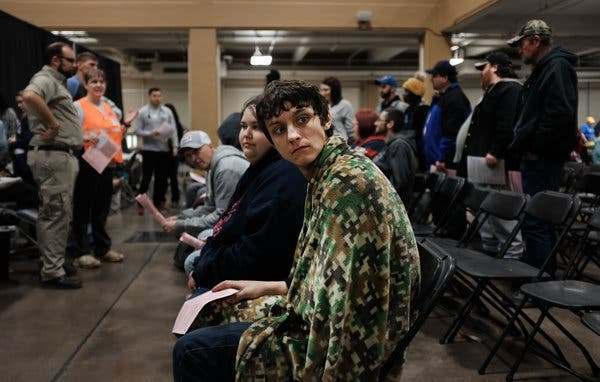 Over the weekend The Washington Post published a heart-rending description of a pop-up medical clinic in Cleveland, Tenn. — a temporary installation providing free care for two days on a first-come-first-served basis. Hundreds of people showed up many hours before the clinic opened, because rural America is suffering from a severe crisis of health care availability, with hospitals closing and doctors leaving.

Since the focus of the report was on personal experience, not policy, it’s understandable that the article mentioned only in passing the fact that Tennessee is one of the 14 states that still refuse to expand Medicaid under the Affordable Care Act. So I’m not sure how many readers grasped the reality that America’s rural health care crisis is largely — not entirely, but largely — a direct result of political decisions.

The simple fact is that the Republicans who run Tennessee and other “non-expansion” states have chosen to inflict misery on many of their constituents, rural residents in particular. And it’s not even about money: The federal government would have paid for Medicaid expansion.

So if rural America is suffering, a large part of the explanation is gratuitous political cruelty. This cruelty has denied health insurance to millions who could have had it with a stroke of the pen. And rural hospitals are closing, rural doctors leaving, in large part because people can’t afford to pay for care.

To see what I mean, just compare Tennessee with its neighbor Kentucky. As recently as 2013, just before the Affordable Care Act went into full effect, the two states looked similar in terms of health care: In both states, about 20 percent of nonelderly adults lacked insurance. But unlike Tennessee, Kentucky did expand Medicaid, and it also did its best to make Obamacare work.

The result was a two-thirds drop in the uninsurance rate. At the same time, progress in Tennessee was far more limited. At this point, adults in Tennessee are twice as likely as their neighbors to lack health insurance.

And the divergence in destinies was even greater for rural residents. According to a Georgetown University study that covered a seven-year period spanning the introduction of the A.C.A., the percentage of low-income rural adults without health insurance fell 27 points in Kentucky, only six points in Tennessee.

Of course, if the U.S. were like every other wealthy nation, and provided some kind of universal health care, there would be no uninsured at all. Those heart-rending scenes in Cleveland would be inconceivable anywhere else in the advanced world. But the A.C.A. isn’t a future aspiration, it’s an already-existing program — and a lot of rural America’s medical misery could be avoided if states like Tennessee were willing to take advantage of that program.

And we’re not just talking about having insurance; we’re talking about whether there are doctors and hospitals available to provide care. True, rural hospitals have been closing in many states as the nonmetropolitan population declines. But a project that tracks rural hospital closings since 2010 finds that a great majority have taken place in states that didn’t expand Medicaid. Four rural hospitals have closed in California, but 17 have closed in Texas. Tennessee has had three times as many closings as Kentucky.

The point is that much of the collapse of rural health care could have been avoided, and could be easily reversed, if so many state governments hadn’t chosen to impose misery on their own rural constituents.

While rural Americans often tell reporters that they feel neglected and ignored by big-city coastal elites, the people preventing them from getting health care aren’t in New York or D.C., they’re in their own state capitals. And these state politicians hold power in large part thanks to the strong Republican leaning of rural voters.

But why are Republican state-level politicians so determined to punish their own base? As I said, it’s not about the money: Rejecting the Medicaid expansion actually costs a state jobs and hence revenue.

Some of it may reflect the general meanspiritedness, the embrace of cruelty, that was already infecting the G.O.P. even before Donald Trump, and has now become one of the party’s defining traits. Yes, that’s harsh, but you know that it’s true.

There’s also, I suspect, an element of cynical calculation. As I said, rural voters often complain that national elites don’t care about their needs. Well, one way to make people feel hostile toward those elites is to block their access to federal benefits, and hope they don’t realize who’s actually causing their misery.

Is it conceivable that conservative politicians have that much contempt for their base? Yes.

In any case, the point is that while rural decline in general is a hard problem, with no easy answers, rescuing rural health care isn’t hard at all. We know how to ensure that rural Americans get the health care they need. This isn’t a problem of policy, it’s a problem of politics — and most of the blame lies with Republican state governments.