Barack Obama’s is dividing opinions, as others have before 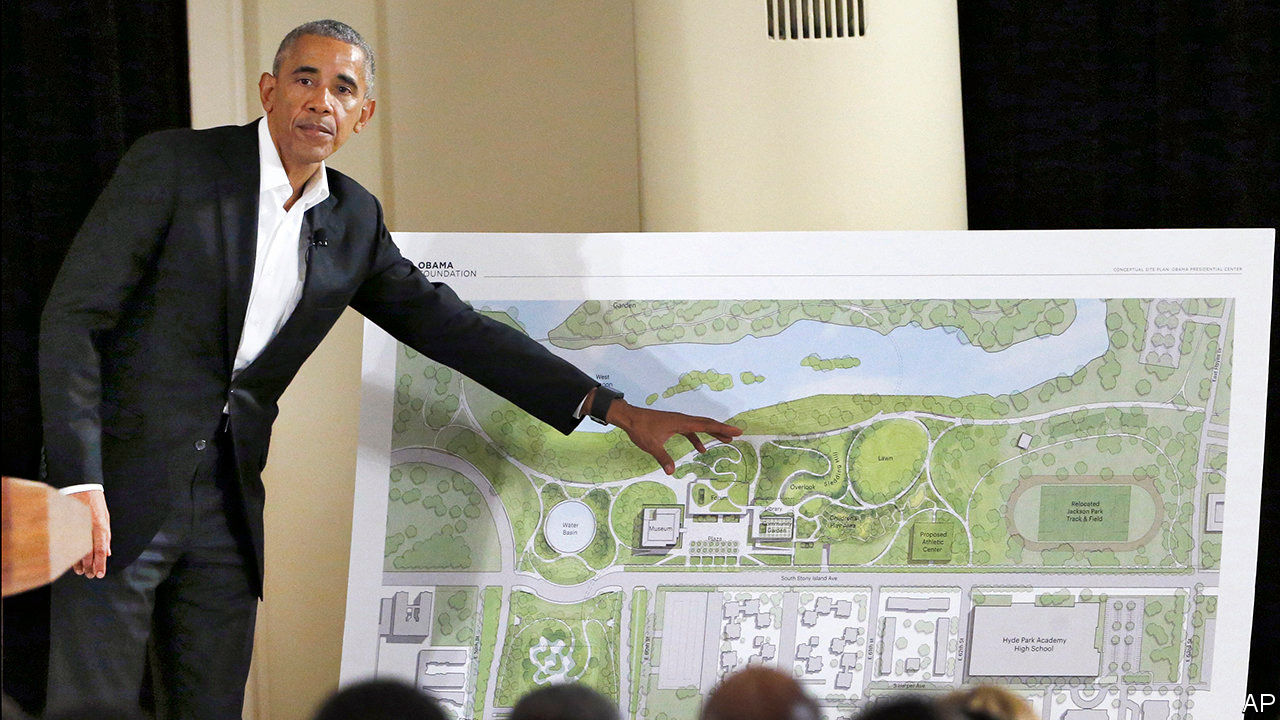 THE BUILDING of Barack Obama’s presidential library in Chicago ought to be uncontroversial. Unlike many other such libraries, it will not be maintained by American taxpayers. The Obama Foundation, a non-profit organisation founded by the 44th president, will foot the bill for maintaining the building, overseeing its exhibits and running its events. But not all Chicagoans are thrilled by what the foundation has called a new “economic engine for the city”. A local pressure group, Protect Our Parks, has taken city authorities to court for its decision to grant 20 acres of land in Jackson Park, on Chicago’s south side, on a 99-year lease costing just $10. Indignant at this relinquishing of public space, the group calls the act an “illegal land grab”. If legal matters can be sorted out, the complex will open in 2021. It will not be a presidential library in the traditional sense of housing Mr Obama’s records. Instead, the foundation has formed a partnership with the National Archives and Records Association (NARA), a government agency, which will digitise them. The building will be part museum, part community centre.

The libraries use exhibitions and events to chart the lives of their respective presidents. Some contain recreations of the Oval Office. They also hold archives of documents from the presidents and their staffers and, in the cases of Lyndon B. Johnson and Nixon, recordings of conversations they had in office.

Presidential records (such as books, correspondence, memos and papers) were once considered the property of the office holder. As a result, many documents were poorly looked after, lost or destroyed. In 1941 Franklin D. Roosevelt opened the first presidential library and donated his records to the state.

Presidential libraries can take two forms. In some cases, presidents and their supporters run the libraries themselves (as was the case with Richard Nixon’s until 2007). This applies mainly to the records of presidents who served before Herbert Hoover, because the NARA refuses to fund them. For more recent presidents, maintenance is usually overseen by NARA, which also looks after on-site archives. The Presidential Libraries Act of 1955 stipulated that presidents could build a library using funds they raised themselves, with ownership (and maintenance costs) subsequently transferred to the state. In 1978 the Presidential Records Act transferred ownership of all records to the public, bolstering libraries’ archival offerings by imposing a legal duty on presidents and their staff to ensure records are not thrown away. Later, Congress required presidents to provide an endowment in proportion to the size of the library, to contribute to maintenance costs.

The libraries have been a source of controversy before. Benjamin Hufbauer of the University of Louisville says they are tantamount to presidential publicity centres. Johnson paid close attention to his library’s attendance figures, reportedly suggesting that opening times be extended and doughnuts served to boost numbers. Some libraries have provoked ire with their selectivity. An exhibit at the Nixon library, when still privately owned by the Richard Nixon Foundation, implied that the uproar over the burgling of the offices of the Democratic National Committee in 1972 in an effort to steal campaign secrets—an event that Nixon tried to cover up and for which he was forced to resign—was actually an effort by Democrats to overturn his victory in the 1972 election. This version of the Watergate scandal was only redressed when the library came under public ownership. However, even under NARA stewardship libraries can be problematic. The Iran-Contra scandal was one of the biggest controversies of Ronald Reagan’s presidency, resulting in a congressional investigation and the indictment of a number of senior administration officials. Yet it went unmentioned by exhibitions in his library until 2011.

The libraries do, however, have some more practical benefits. Many consider them a boon for the local economy. Indeed, that may well be the reason why, despite NARA’s refusal to fund libraries for presidents preceding Hoover, local groups and states fund the libraries themselves. In 2018, 100 years after the death of Theodore Roosevelt, North Dakota’s governor unveiled an as-yet-unconfirmed plan to commit $50m of state funds, matched by $100m in private donations, to a library dedicated to the former president. What should be expected from President Donald Trump’s library? Mr Hufbauer would comment only on Mr Trump’s taste:  “He does seem to have a fondness for gold.” As for the legacy of the 45th president, the records will have to speak for themselves.

Source: Why presidential libraries are controversial – The Economist explains