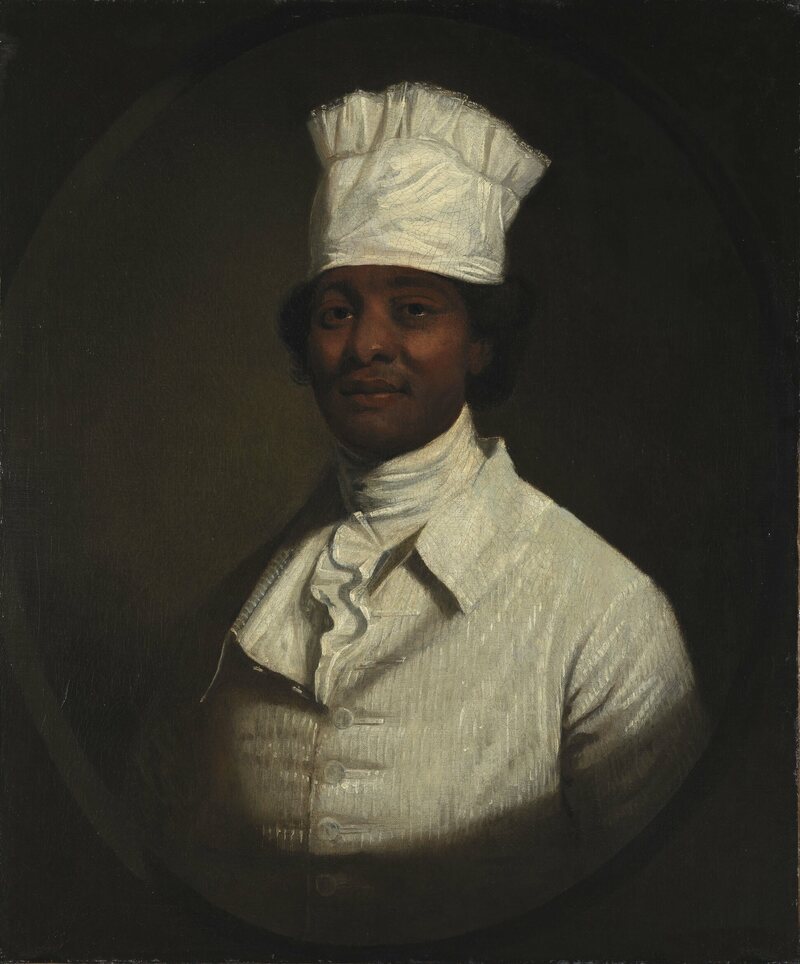 Gilbert Stuart’s portrait of Hercules, thought to have been painted between 1795 and 1797. PUBLIC DOMAIN

AFTER A LONG DAY IN president George Washington’s executive kitchen, chef Hercules hit the streets of Philadelphia with sartorial flair and a keen eye for late-18th century fashion. Atop his head, the enslaved cook wore a voguish tricorn hat. Bright metal buttons held together his blue velvet-collared coat, a pair of shiny buckles dominated his fastidiously polished shoes, and a long watch-chain dangled from the side of his black silken pants.

“Thus arrayed, the chief cook invariably passed out the front door,” as Washington’s adopted son, George Washington Parke Custis wrote several decades after his father’s death. A gold-headed cane firmly in hand, Hercules would then proceed up Market Street, which was, in the 1790s, where fashionable people “did most congregate.” There, he drew considerable attention. While strangers gawked, those who knew him bowed, hoping, as he writes, “to receive in return a salute of one of the most polished gentlemen and the veriest dandy of nearly sixty years ago.”

It’s a testament to both Hercules’s charisma and culinary skills that historians remain as enchanted with him today as his peers in the 18th century were. In recent years, a renewed focus on early African-American cuisine has revived interest in the story of a man who, while enslaved by the Washington family between 1770 and 1797, bested cruel, capricious treatment to become one of the most famous chefs in the early American republic.

According to historian Kelley Fanto Deetz, author of Bound to the Fire: How Virginia’s Enslaved Cooks Helped Invent American Cuisine, Hercules might have been America’s first celebrity chef. “Chef Hercules was a very proud and confident man, whose culinary skills and status were recognized throughout the nation,” she says. “He demanded perfection from his staff in the presidential kitchen, and he commanded attention and respect from the public as well—something unheard of for enslaved laborers of his period.”

Early details of Hercules’s life are limited to brief appearances on tax documents. He first showed up on Washington’s “List of Tithables” in 1771, and subsequent records suggest Washington kept him as a house slave for his first ten years at Mount Vernon. It’s unclear when exactly he moved to the kitchen—though Washington first mentioned him as a cook in a 1786 diary entry. Within three years, Washington promoted Hercules to head chef.

According to Adrian Miller, the James Beard Award-winning author of The President’s Kitchen Cabinet, Hercules likely earned this promotion after mastering contemporary cooking techniques, which required equal amounts of precision and discipline. “The biggest skill that Hercules would have learned is hearth cooking, also known as cooking in a fireplace,” he says. “He would have learned how to tend a cooking fire, what cooking utensils to use, how to change the elevation of cooking vessels hanging in the fire to get the desired cooking effect, and how to cook in warm ashes.”

By the end of Washington’s first year as president, Congress enacted the Residence Act of 1790—a law that not only cemented plans to build a permanent capital along the Potomac, but also temporarily relocated the federal government from New York to Philadelphia. When it came time for Washington to move into his executive mansion on Market Street, he resolved to bring nine enslaved laborers with him, including Hercules.

Though Hercules had little choice in the matter, he had enough sway over the president to lay out one major stipulation: He insisted upon bringing along his son, Richmond. On November 22, 1790, Washington admitted to his secretary, Tobias Lear, that he had allowed this not on the strength of Richmond’s merits in the kitchen, but simply because Hercules desired “to have him as an assistant.”

Initially, Washington planned for Hercules to cook alongside the professional chef John Vicar, though the president quickly replaced Vicar with Samuel Fraunces in May 1791—a development that evidenced Washington’s preference for Hercules’s food. The president intended Fraunces to serve as his chief steward, a role that involved maintaining and outfitting the executive manor. Though this job also involved overseeing “the Cookery,” Custis’s memoir suggests Fraunces mostly concerned himself with plating and serving food. The kitchen, he wrote, was the realm for “the labors of Hercules.”

Hercules seems to have run an orderly, sanitary kitchen. Though mild-mannered outside the workplace, he quickly rebuked anyone in the executive mansion who failed to meet his exacting standards. “Under his iron discipline,” Custis wrote, “wo[e] to his underlings if speck or spot could be discovered on the tables or dressers, or if the utensils did not shine like polished silver.”

According to Custis, Hercules especially shone during the dinners Washington hosted for members of Congress. These events were crowded and often hectic, but under Hercules, “it was surprising the order and discipline that was observed in such bustling a scene,” he wrote. “[Hercules’s] underlings flew in all directions to execute his orders, while he, the great master-spirit, seemed to possess the power of ubiquity, and to be everywhere at the same moment.”

Hercules’s specialties unfortunately remain lost to history. Deetz believes he likely focused on “typical colonial fare, kicked up a notch”—foods such as braised fish, oyster stew, custards, puddings, and fresh breads. But whatever was on these menus made him famous. At the height of Hercules’s popularity in Philadelphia, even his leftovers were hot commodities. “His perquisites from the slops of the kitchen were from one to two hundred dollars a year,” Custis noted—roughly $5,000 by today’s standards.

Hercules put this money to good use, spending most of it on fashionable clothes, which helped him to confidently enter prominent social circles that converged on Market Street. “He was able to navigate the streets of Philadelphia, and he got respect there that he could not get back in Virginia,” Deetz says. “He was able to behave not only like a freeman, but a popular man and a famous one.” What’s more, his success during these outings eventually paved the way for his escape.

Throughout Hercules’s stay in Philadelphia, Washington had insisted the cook take periodic trips back to Virginia to avoid breaking the Act for the Gradual Abolition of Slavery—a state law that freed any slave who lived within Pennsylvania’s borders for six continuous months. Despite being aware of Washington’s ulterior motive for these trips, Hercules obliged, which seems to have lulled the president into a state of false security. “Washington allowed Hercules certain liberties as a combination of trust and arrogance,” Miller says. “He probably thought that Hercules should be so honored to be his cook that he would never run away.”

For reasons that remain mysterious, Hercules moved back to Mount Vernon in 1796. On Washington’s 65th birthday (February 22, 1797), Hercules fled. It’s unclear where he took refuge, though Deetz believes he initially headed to Philadelphia. Back then, Pennsylvania was a hotbed of abolitionism, she says, and he had spent years there accruing “sympathetic and capable allies.” Hercules’s flight was not without tragedy, though: In addition to Richmond, he still had two daughters who remained enslaved at Mount Vernon.

Meanwhile, an enraged Washington offered a reward for Hercules’s capture and instructed his associates across the country to keep an eye out for the runaway. By November 1797, the fruitlessness of these measures caused him to write a frustrated letter to his nephew, George Lewis. This document, as much as any other in Washington’s late correspondence, demonstrates how the president’s reliance on slave labor far outweighed any late-in-life epiphanies regarding its immorality. “The running off of my Cook has been a most inconvenient thing to this family,” he wrote, “and what renders it more disagreeable, is, that I had resolved never to become the master of another Slave by purchase; but this resolution I fear I must break.”

Though the Washington family remained frustrated by Hercules’s flight even after the president’s death in 1799, the cook’s friends and family immediately celebrated his bravery. In April 1797—two months after Hercules’s escape—Washington hosted Louis-Phillipe, the future king of France, for a brief tour of his plantation. During his stay, the Frenchman recorded a short, poignant anecdote in his diary about a conversation he’d had with his valet, Beaudoin.

While walking the grounds of Mount Vernon, Beaudoin talked with Washington’s enslaved workforce. After learning of Hercules’s flight, the valet had approached the man’s youngest daughter. “You must be deeply upset that you will never see your father again,” he told her. To the contrary, she responded, “I am very glad, because he is free now.”