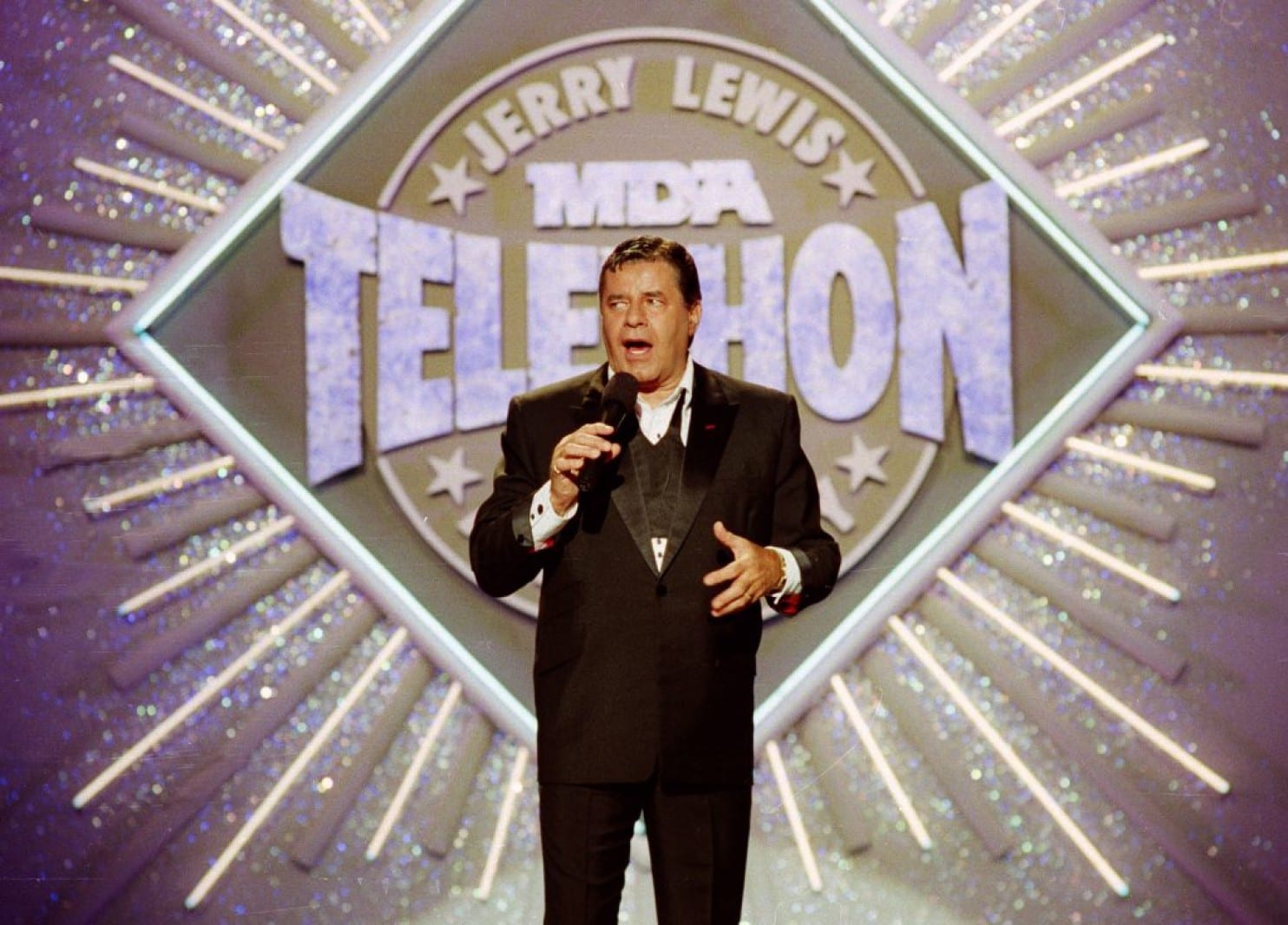 As Jerry Lewis continuously rose and fell in the eye of public opinion throughout his career, one thing remained constant: Every Labor Day weekend from 1966 to 2010, he and celebrity pals such as Sammy Davis Jr., Johnny Carson and Jack Benny would be on television for almost 24 hours, raising money for the Muscular Dystrophy Association on his annual telethon.

He raised around $2.5 billion through these telethons, the MDA told the Los Angeles Times, and he scooped up some impressive accolades for himself along the way, such as the 2009 Jean Hersholt Humanitarian Award given by the Academy of Motion Picture Arts and Sciences.

When he died Sunday at 91, the White House issued a brief statement of appreciation, which mentioned “his incredible charity work” that “touched the lives of millions.” It called him “one of our greatest entertainers and humanitarians.”

To many, Lewis was a hero.

But to many others, including a large contingent of people living with disabilities, his telethons were insensitive and self-serving. They said that Lewis treated the children he claimed to be helping with little respect, that he pitied those living with muscular dystrophy and that he used offensive language when describing them.

Eventually, the telethons were protested by a group of people with disabilities who called themselves Jerry’s Orphans, a play on the term Jerry’s Kids, which Lewis used to describe those children with muscular dystrophy.

The backlash grew so loud that in 2001, Lewis apologized for referring to people confined to wheelchairs as “cripples” and for saying donors gave to the telethons out of pity. The apology came after he told “CBS Sunday Morning” that, “I’m telling you about a child in trouble. If it’s pity, we’ll get some money.”

Indeed, as the culture changed, the way people spoke about people with disabilities changed dramatically during the years Lewis hosted the telethon, but he often seemed to be a step behind.

When discussing why he raised money for those with muscular dystrophy, Lewis was always vague. On “The Phil Donahue Show,” he once explained it by saying, “It was a very personal, very private reason.”

The appeal began in 1966 on a single television station in New York, when such fundraising methods were still in their infancy. It raised just over one million dollars, the Associated Press reported.

From there, the telethon continued to grow. As it did, it attracted its fair share of detractors.

“I have always had problems with the pity approach to raising money,” the late Evan J. Kemp Jr., the chairman of the Equal Employment Opportunity Commission during the George H.W. Bush administration, who has a form or muscular dystrophy, told the New York Times in 1992. “I think emotions can be turned on without pity stories. There’s a fine line between compassion and pity. You know it in the way you’re treated.”

Writer Ben Mattlin, self-described as being “born with a muscular-dystrophy-related disease,” wrote an open letter to Lewis in a 1991 issue of the Los Angeles Times. Its title: “The Disabled Need Dignity, Not Pity.”

Mattlin, who once appeared on Lewis’s telethon, wrote that the annual spectacle “always turned my stomach” before stating that a woman with a “disability similar to mine, says she cannot watch your telethon because it makes her want to kill herself.”

Speaking of “the dystrophic child’s plight,” or calling disability a “curse” reinforces the offensive stereotype that we are victims. Wheelchairs are not “steel imprisonment,” nor are we who use them “confined” or “bound”; they are liberating aluminum and vinyl vehicles. Similarly, phrases like “dealt a bad hand” and “got in the wrong line” are unfair. Disability is not “bad” or “wrong.”

Other examples abound: Being dressed or fed by others is a hassle, but not an “indignity.” There is no shame in needing others, no loss of dignity. Our needs are more personal and continuing than other people’s — nothing to be ashamed of.

In 1992, a group of critics “who include several former telethon poster children who call themselves ‘Jerry’s Orphans,’” protested the telethon in several cities at stations that carried the broadcast, The Washington Post reported.

“Our goal is to put Jerry Lewis out of the disability business. He has no business being there. He doesn’t understand in any way, nor does he wish to, the majority of the [disabled] population,” Mike Ervin, a former telethon poster child from Chicago who co-founded Jerry’s Orphans, told The Post.

The telethon persisted despite these protests, ending five years after he and the MDA parted ways in 2010, “under circumstances that remain vague,” as The Washington Post’s Adam Bernstein reported. He was 84 years old. By that time, the telethon was just three hours long.

After he left, the progressive publication the Nation ran a piece with the headline, “The End of the Jerry Lewis Telethon — It’s About Time” and a subhead reading, “A great day for people with disabilities.” It pointed to a moment in the 1973 telethon when Lewis reportedly, “holds up a child with muscular dystrophy and announces, ‘God goofed, and it’s up to us to correct His mistakes.’”

But the telethon had many defenders as well.

“The telethons have heightened public awareness, not only for MDA victims, but other disabilities as well,” MDA spokesman Bob Mackle once said, according to the AP. “Before the telethons, people with disabilities weren’t seen on television. Children were not allowed in schools, disabled people were shunned. The telethons changed that by humanizing the victims.”

Arguably the loudest voice belonged to Muscular Dystrophy Association vice president, the late Bob Sampson who had a form or muscular dystrophy.

“If I didn’t feel my dignity and my pride were being preserved, I would never have become involved,” Sampson told the New York Times. “I believe in Jerry Lewis.”

Lewis himself, never known for keeping a low profile, had no time but many harsh words for such critics.

“I have all the strength in the world to fight those morons,” he once told The Washington Post about his telethon critics. “Do they want to talk to the 135,000 who are afflicted, who call me their hero? They’ll get killed. And what about the S.O.B.s who come to you and say, ‘How much do you get out of this action?’ You have to smile, because they have capital punishment in most states.”

One thing is certain: The MDA has not distanced itself from Lewis.

“MDA would not be the organization it is today if it were not for Jerry’s tireless efforts on behalf of ‘his kids,’” MDA Chairman R. Rodney Howell said in a statement after Lewis’s death. “Jerry’s love, passion and brilliance are woven throughout this organization, which he helped build from the ground up.”

“Though we will miss him beyond measure, we suspect that somewhere in heaven, he’s already urging the angels to give ‘just one dollar more for my kids,’” Howell added.

Source: Jerry Lewis telethons raised billions for muscular dystrophy. Many cheered when he went off the air. – The Washington Post