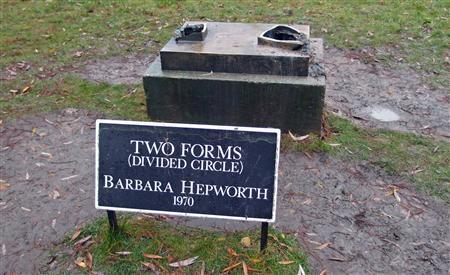 (Reuters) – For years a bronze statue of Alfred Salter sat on a bench looking out on a quiet bend of the River Thames, a memorial to a doctor who dedicated his life to a London district once infamous for Dickensian levels of poverty and disease.

Now the bench is empty after his statue fell victim to a wave of metal thefts sweeping Britain, threatening artworks and ravaging infrastructure as thieves seek to capitalize on soaring metal prices and a cash-in-hand scrap industry.

Memorial plaques and artworks are unsentimentally lumped together with electrical cables and drain covers in the hunt for illegal metal, which police say costs Britain hundreds of millions of pounds each year and kills two thieves a month.

“He was an inspiration to many people and a tireless campaigner against social injustice and so it’s a great shame that thieves have now taken his memorial,” said Salter’s last remaining relative Johanna Crawshaw, who has pledged to double a council reward for information leading to the statue’s return.

Reward posters are plastered all over Bermondsey, once home to a riverside slum depicted by Charles Dickens in Oliver Twist, in the London borough of Southwark.

The borough was also the site of another metal theft earlier this month, from a public park where only two stumps remain of a valuable artwork by renowned British sculptor Barbara Hepworth. The local government called the theft part of a “sickening epidemic.”

In Wales, University Hospital Llandough was forced to postpone more than 80 operations this month, including on cancer patients, after metal thieves targeted one of its generators.

“Staff and patients alike are appalled by this dangerous and irresponsible act, and it beggars believe that anyone could stoop so low,” said Paul Hollard, deputy chief executive of Cardiff and Vale University Health Board.

Some hapless thieves have been killed trying to steal live electrical cables.

Since January 2009, the price of the type of copper popular with thieves has more than doubled on the London Metal Exchange. Meanwhile, many more Britons’ finances are being squeezed by the harshest public spending cuts for a generation, part of government plans to tackle a big budget deficit.

Scrap yards contacted by Reuters said they pay about 3.50 pounds ($5.50) for a kilo of copper, depending on quality and the market price on the day.

“Police have found adapted ladders, tools, and even vans that have specially adapted trapdoors to winch up a manhole cover as they drive over it without being observed,” London’s Metropolitan Police service said in a statement.

Protecting metal from thieves is especially difficult in rural areas, where the police presence is usually small.

The church in the Yorkshire village of Haworth where the authors and sisters Charlotte and Emily Bronte are buried has launched an appeal for cash to fix its roof, whose repeated targeting by lead thieves has hastened its disrepair.

“It’s a problem in rural England. These people have free rein to go pretty much undetected. We have a very small police presence. Our neighborhood policing team are great but there’s only so much they can do …. We’re easy pickings,” said John Huxley, chairman of Haworth Parish Council.

British police are ramping up efforts to tackle the crime, with the Metropolitan Police last week launching a Waste and Metal Theft Taskforce, while police across England and Wales this month took part in a national “day of action” against the practice, during which they searched hundreds of scrap yards.

In England’s North East, which police say is the epicenter of railway metal theft, police are from January trialing a system in which scrap sellers must prove their identity so that stolen metal can be traced.

Parliament is considering a bill that would toughen scrap dealing laws, including ending trade for cash and giving greater police and judicial powers to close rogue yards. The British Metal Recycling Association says a cashless system would drive business to illegal yards [ID:nL5E7N51QU].

In the meantime, Southwark Council is carrying out a risk assessment of 165 pieces of public art in the borough, and may use closed circuit cameras to monitor more valuable pieces or put them in storage until they can be made safe.

n sight of London’s Tower Bridge, depicted him waving at his daughter in happier times, before she died of scarlet fever at the age of nine.Monuments vanish, power cut as metal thieves stalk UK | Reuters.