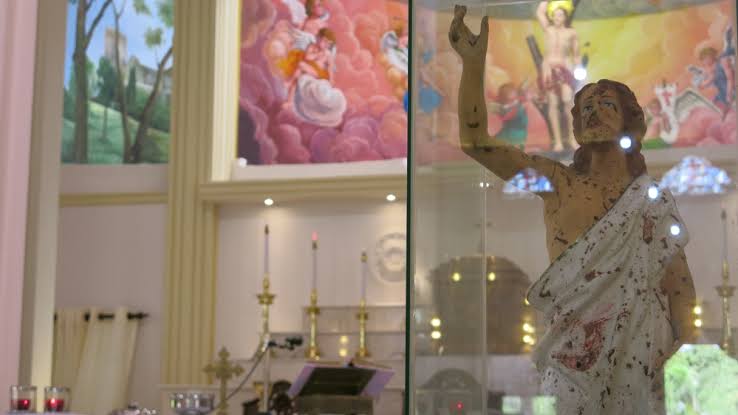 Negombo, Sri Lanka – Sitting in the tiled courtyard of a silver-domed mosque in the western Sri Lankan coastal town of Negombo, Aslam Ghafoor said he fears that his neighbours no longer trust him.

“So many friends in my contacts,” the 54-year-old explained, gesturing to his mobile phone, “they are non-Muslims, and we have been living like brothers. [But] we can’t talk to them now, to ask how they are doing, because we have lost that connection.”

On April 21, at least 149 people were killed when a suicide bomber targeted St Sebastian’s church in Negombo, one of six coordinated bombings that killed 269 people and wounded more than 500 others across the South Asian island nation.

The bombings rocked the country, which had not seen such violence since the conclusion of its 26-year civil war in 2009. Soon after the attacks, the authorities said the National Thowheed Jamath (NTJ), a local armed group that has ties to the Islamic State of Iraq and the Levant (ISIL or ISIS), was responsible. Police said Zahran Hashim, a “radical” Sri Lankan Muslim preacher from the island’s eastern region, had masterminded the bombings.

The claim sent shockwaves through Sri Lanka, where a Muslim minority of about 10 percent of the country’s 21.8 million population had largely been living in peace.

“[We were told by Christian friends] that Muslims, you shouldn’t come here, even to the hospital,” said Salim Siraj, 37, a local Muslim community leader, who explained that many Muslims rushed to the hospital or attack site to try to help. “The Muslims who went to help those people, they were chased back and told not to come.”

In an instant, Siraj said, years of trust and harmony had evaporated.

“We had no idea what has happened and who is behind it, but already it was framed that it was done by the Muslim community. So we were stuck in the middle: we can’t even go and help them, but also we can’t even defend ourselves.”

About two weeks later, dozens of Christians rampaged into a Muslim neighbourhood, damaging more than 85 houses and scores of vehicles over the course of an hour and a half, as police enforced a curfew on the city, Muslim community members said.

In other towns, Sinhala Buddhist mobs also attacked Muslim communities, resulting in widespread damage and at least one death.

Muslim-run businesses, such as this butcher’s shop, are common in Negombo but have faced widespread boycotts by Christians since the Easter attacks [Asad Hashim/Al Jazeera]

As Sri Lanka gears up for a presidential election, in which national security has become a core campaign issue, the tensions in Negombo illustrate growing divisions between religious communities as a result of the April attacks and subsequent retaliations.

According to an International Crisis Group (ICG) report, Muslims have been increasingly targeted by arbitrary arrests, attacks and business boycotts. Since April, at least 1,800 Muslims have been arrested in connection with the bombings, the report says, with more than 300 still in custody.

A police spokesperson was unable to confirm the figures to Al Jazeera.

A few kilometres away from Negombo’s main mosque, St Sebastian’s Church gleams in the winter sun, now almost completely rebuilt after the attack. Worshippers fill the pews for Sunday service and spill out into a grey-bricked courtyard lined with palm trees.

Rohini Kothalawala, 45, a housewife who converted to Christianity from Buddhism 30 years ago, was in one of the front pews when the bomb exploded.

Kothalawala recalled how, for the first few moments, she stood, in shock, rooted to the spot. Her 26-year-old daughter had to drag her outside.

Rohini Kothalawala, 45, is a survivor of the church bombing [Asad Hashim/Al Jazeera]

Outside, she said she could smell “meat and blood”, but was still unable to process what had happened.

Shortly after, she walked back into the church to find a plastic bag with her belongings in it.

“I bent down to get the bag, and on the bench behind me, I looked back and saw lying on the bench a severed head.”

She later learned that it belonged to the bomber.

Since that day, Kothalawala has not gone to a shop or business owned by a Muslim.

“We don’t want to go those shops, because they are the ones who came into our church, where we were worshipping our Lord, and they did this to us,” she said, emphasising the word “our”.

There is a crack [between people], and you can’t fix it. Once a thing cracks, it’s very difficult to fix it again … the crack will remain. Now our lives are almost over. Our time is finished, but for the next generation, it will be very difficult for them. Why? Because wherever we go, they look at us differently.

Other Christians in Negombo told Al Jazeera that they, too, were refusing to patronise businesses owned by Muslims because of the attacks, although some explained that they had recently begun to ease the boycott.

Father Sachitha Jayalath, a priest at St Sebastian’s, said the level of suspicion of the Muslim community, after widespread arrests and police claims that “weapons caches” had been recovered across the island following the attacks, was understandable.

“At many places, there were weapons found out, so obviously one can ask ‘OK, did they all know this, were they planning for something like that, for another ethnic conflict?’,” said Jayalath as he sat at his desk in a terracotta-roofed building adjacent to the church. “I think it is obviously reasonable to ask that question.”

Local Muslims, however, said they felt they were being deliberately alienated from their friends and neighbours by those seeking to demonise the community.

Muhammad Iftikhar, 54, runs a car spare parts business in Negombo, and believes Muslims are now watched “with doubt when we walk anywhere”.

“There is a crack [between people], and you can’t fix it. Once a thing cracks, it’s very difficult to fix it again … the crack will remain,” he explained.

Iftikhar said it is not the prejudice he faces that worries him, but what his children may face in the future.

“Now our lives are almost over. Our time is finished, but for the next generation, it will be very difficult for them. Why? Because wherever we go, they look at us differently.”

In what has been a raucous and divisive election campaign, Gotabaya Rajapaksa, of the opposition Sri Lanka Podujana Peramuna (SLPP), has emerged as a marginal frontrunner in a race where any advantage is razor-thin.

Rajapaksa, brother of former two-term president Mahinda Rajapaksa and a former defence chief who oversaw the end of the civil war, announced his candidacy for president within days of the attacks. He has made a point of making national security a major campaign issue, accusing the government of “dismantling” intelligence structures he had set up when he was in government.

Sajith Premadasa, the ruling United National Party (UNP) candidate, has also distanced himself from the government on certain issues, and promised to address widespread failures of the state’s security and intelligence apparatus identified by a parliamentary investigation report released last month.

The attacks targeting Sri Lanka’s Muslim minority following the Easter bombings were not, however, the first time the Muslim community has been in the crosshairs in recent years. Since 2011, Buddhist nationalist groups have held several protests and rallies – some of which devolved into riots and attacks on Muslims – calling for a Sinhalese-dominated form of government, according to the ICG report.

Right now, Muslim people live here like they are guests. They do not mix with the Sri Lankan culture. There are so many valuable teachings in Quran, but [they] don’t care about that. [They] give priority to social divisions.

Athuraliye Rathana, a member of parliament and prominent Buddhist monk, has been a part of that campaign, calling for Muslim universities and certain mosques to be shut down, and for Muslim politicians to be investigated for ties to armed groups.

In May, Rathana undertook a hunger strike protest demanding that two provincial governors and a minister – all Muslims – resign over his allegations that they were supporting armed groups. Within days, all three were forced to leave office, with an additional six Muslim ministers resigning in protest. The allegations remain unproven, although a court case is pending.

“Right now, Muslim people live here like they are guests,” Rathana told Al Jazeera at his office in a Buddhist community centre in the capital Colombo. “They do not mix with the Sri Lankan culture.”

“There are so many valuable teachings in Quran, but [they] don’t care about that,” he added, forcefully. “[They] give priority to social divisions, differences from other humans.”

Rathana explained that he is supporting Gotabaya Rajapaksa – despite having opposed his brother Mahinda in the past – because he believes that Sri Lanka needs “a strong leader” to tackle “Islamic fundamentalism”.

Back in Negombo, Muslim citizens say they are fearful of the results of this election, regardless of which way they go.

Iftikhar, the car parts salesman, said he is voting for Premadasa, but not necessarily because he supports all of his policies.

“[I am voting for Premadasa] because I don’t want Gotabaya to win. He will make things very difficult for us … because he is backed by [people who are anti-Muslim].”

Earlier this month, Madumadawa Aravinda, a prominent politician backing Rajapaksa, was filmed making a speech where he urged voters to support the SLPP candidate if they wanted to stop Islamism from spreading. He was later forced to resign from his Pivithuru Hela Urumaya political party after Rajapaksa’s SLPP complained.

“[Fear] was an easy product to sell. Everybody is in fear now,” said Siraj, the Muslim community leader.

Asked if he thought either of the frontrunners could offer a defence against anti-Muslim prejudice, Siraj laughed.

“I don’t think the future for Muslims will be better. What I think is that ‘bad’ is better than ‘worse’.”