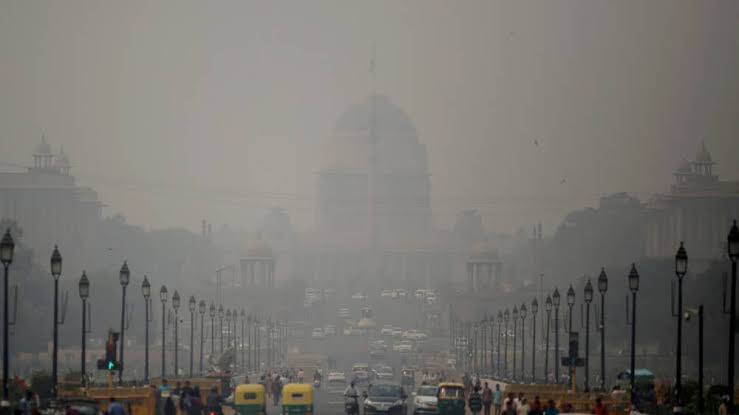 Air pollution levels in India’s capital remained at near record levels, forcing schools to shut down through mid week and keeping residents indoors, as the nation grapples for solutions.

The air quality index, or AQI, reached as high as 858 at some areas in New Delhi at 6.30 a.m. on Monday after breaching 1,000 over the weekend, according to website AirVisual, which monitors air pollution around the world. Readings above 300 are considered hazardous and anything below 50 is the safe level.

The level of carcinogenic pollutants, which increases risk of stroke, heart disease and lung cancer, in New Delhi’s air was almost six times the reading in Beijing, where air quality has seen a considerable improvement over the past years.

“A child born yesterday in Delhi would have smoked 40-50 cigarettes on the first day of his or her life,” said Arvind Kumar, a lung surgeon at the Sir Ganga Ram Hospital in Delhi and founder of the Lung Care Foundation. “A silent damage is occurring inside our body.”

India, home to 10 cities with the world’s worst air quality, has been struggling to contain this annual catastrophe that killed an estimated 1.24 million citizens in 2017. Governments have pledged millions of dollars and deployed extra teams to enforce existing laws that include a ban on farmers burning stubble after harvest. But the sheer size of India makes rapid progress difficult.

Air quality in Delhi at midday 999 … AKA a top-coding problem where the machines can’t measure the pollution. Remember the moment in Chernobyl when the dosimeters go phut. pic.twitter.com/HBUo6sR7CJ

Air quality generally deteriorates as winter sets in because of a combination of agricultural crop burning in the nearby states of Punjab and Haryana, dust from roads and construction sites, industry, coal power plants and vehicular emissions.

The country’s top court on Monday ordered immediate steps to curb crop and garbage burning. “It’s happening every year, we are not able to do anything,” said Justice Arun Mishra, who heads a two-judge panel hearing a case in the Supreme Court on air pollution in the national capital region.

The average life expectancy of people living in northern India and along the plains of river Ganga, the most famous waterway, is likely to be curtailed by seven years because of pollution, according to the website of Energy Policy Institute at the University of Chicago. The Indo-Gangetic plain is one of the most-clogged regions, housing more than 40% of India’s 1.3 billion people, it said.

“It’s a severe plus situation, it’s a health emergency situation,” Anumita Roychowdhury, executive director of research at advocacy group Centre for Science and Environment, said. “We really have to do a lot more” for Delhi to cut pollution by another 65% to meet the clean air standard, she said.

For the past few years, farm stubble burning — a tradition to clear fields after harvest for the new sowing season — along with festive firecrackers, vehicular and construction emissions have been turning the South Asian nation’s air deadly around October-November.

The city’s provincial government implemented the odd-even scheme – that determines road access by license-plate number to curb vehicular pollution. Cars with registration number ending in an odd figure will be allowed on days with odd dates and even on other days.

Prime Minister Narendra Modi’s Bharatiya Janata Party, which returned to power in May with a bigger mandate, has pledged to reduce levels across 102 most polluted Indian cities by at least 35% over the next five years. Kejriwal’s Aam Aadmi Party, which is set for a face-off with BJP in the provincial election for Delhi early next year, promises induction of electric buses and vacuum cleaning of roads, among other measures.

Camille Raynes-Greenow, a maternal and child health expert at The University of Sydney School of Public Health, put the blame on industries’ disregard for the environment and lack of modern techniques in farming.

“In developing countries like India, we need multi-sectoral approaches that consider both industrial and traditional practices,” she said in an e-mailed statement. “The acute respiratory and eye symptoms that many people will experience are just the tip of the iceberg that will also impact the developing fetus and small children.”