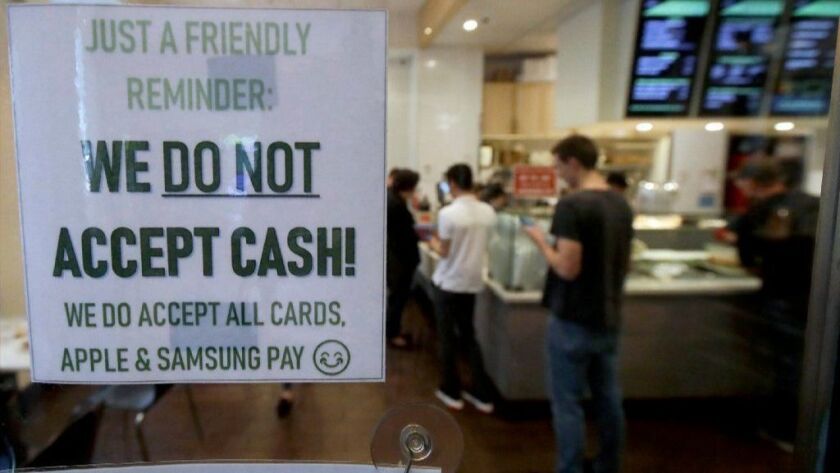 A San Francisco restaurant in May displayed a sign alerting customers that it did not accept cash. But the city subsequently required require brick-and-mortar retailers to take cash in payment for goods. In fact, the U.S. has seen a resurgence in the popularity of physical currency.(Jeff Chiu / Associated Press)

Modern finance requires a lot of trust, and its digital future will demand still more. If, for example, electronic payments are to replace cash, people must be willing to believe that the bits of data traveling among phones, cards, terminals and blockchains actually represent something of value.

So, will people believe? Judging from their growing predilection for physical currency, maybe not.

At first glance, cash would appear to be on its way out.

Sweden has almost eliminated its use for payments. In America, home of the almighty dollar, almost a third of the population gets through a typical week without using a single banknote.

Businesses are experimenting with going cashless, hoping to speed up transactions, combat theft and create a safer environment for their employees.

Actually, though, physical currency is experiencing a resurgence.

People in many of the world’s most advanced nations — including the United States, the euro area and Japan — are holding more of it than ever.

In the U.S., for example, currency in circulation stood at an estimated $1.76 trillion as of late September, according to the Federal Reserve. That’s about 8.2% of gross domestic product, up from just 5.6% before the 2008 financial crisis and close to the highest level in at least 36 years.​

If people need less cash to pay for stuff, why do they want to hold so much of it? The answer, it seems, is that they’re turning to currency as a store of value.

Consider the kind of cash they favor: Increasingly, it’s large denominations such as $100 bills, which are the most convenient for stashing away big sums. Benjamin Franklin’s share of total U.S. currency in circulation reached 80% in 2018, up from 73% a decade earlier, Federal Reserve data show.

The trend in the developed world contrasts sharply with emerging economies such as China, Russia and India, where currency in circulation has been declining as a percent of GDP, according to the Bank for International Settlements.

Why are people in rich nations hoarding cash? No doubt, it has a lot to do with central banks’ efforts to keep interest rates low.

When safe investments such as deposits or government bonds yield little or less than nothing, people aren’t missing out by holding paper money. This illustrates why central banks can’t push rates too far below zero: Instead of spending the money or watching their savings shrink while sitting in the bank, people will just withdraw their cash and put it in the mattress.

That said, the surge in demand for currency has been too large for interest rates alone to explain. This presents something of a mystery.

Criminals, of course, are avid users of cash, but there’s no particular reason to think that their demand for it would have increased so much in the last decade. On the contrary, the advent of cryptocurrencies has provided them with a viable alternative.

One recent study, by a pair of economists in Asia, found a link to aging populations. It seems that older folks — perhaps because they’re less inclined to trust numbers on a screen — have a greater affinity for cash.

So when they make up a larger share of the population, overall currency holdings also go up. This might also help explain the contrast with emerging economies, where population aging is less of an issue (and where interest rates haven’t been as low as in the developed world).

The most troubling possibility is that people are losing faith in financial institutions more broadly.

The surge in cash began immediately after one of the worst financial crises ever — and has been concentrated in the affected countries.

Granted, one wouldn’t expect the effect to keep growing over time. But perhaps persistent scandals — such as those involving fake accounts, manipulative fees and the theft of personal data — have compounded the problem.

Trust might also have something to do with the opposite trend in emerging economies. To be willing to hoard cash, people must have a certain amount of confidence in a government’s ability to manage its legal tender.

In developing countries, this confidence is often lacking. Consider India’s 2016 “demonetization,” in which the government pulled large-denomination banknotes out of circulation and replaced them with new bills.

The move didn’t disrupt the shadow economy as intended, but it did undermine the currency: Cash holdings have yet to recover to their pre-reform level.

Cash accumulation can go only so far as a sign of trust in government. After all, governments in the developed world would typically like to see more electronic payments.

Getting rid of cash can have a lot of benefits: It can help deter crime, reduce tax evasion and give central banks more power to stimulate the economy. But people have to believe that electronic money will be safe from mismanagement, man-made disasters, hackers and even confiscation.

So far, neither the denizens nor the overseers of the financial system have done a great job of earning that trust.

Source: So much for a cashless society: Currency is popular again, especially the $100 bill – Los Angeles Times