The Filipino president’s spokesman has been criticised for dismissing commuters’ concerns in Manila – one of the world’s most gridlocked cities.

Train breakdowns and worsening traffic have put commuters on edge.

But Salvador Panelo – Rodrigo Duterte’s spokesman – told commuters if they wanted to arrive earlier, they should set off earlier.

That led to many frustrated Filipinos accusing Mr Panelo of being “out of touch with reality”.

One resident told the BBC that it already took students three hours to reach class. The situation was worsened recently by three major train breakdowns.

And Mr Panelo’s boss, President Duterte, was not spared from criticism, either.

His government recently bought an ex-US military plane for $39.9m (£32m) to use as his private jet.

The government said the jet, set to be delivered next year, would also be used by other senior officials and in crisis situations. But that didn’t pacify some Filipinos.

“Manila traffic is getting worse and worse and [the administration] is rewarding themselves with junkets and jets. It’s insane,” said one tweet.

Manila – which, in the wider metropolitan area, has a population of more than 12 million – is one of the most densely populated cities in the world.

It suffers from gridlock and in 2015 was named the worst city to drive in. But Mr Panelo seemed less than sympathetic.

“What do they mean by transportation crisis? I just see traffic,” local media quoted him as saying.

“There is transportation, we all manage to get a ride. People get to where they need to go.

“There is a solution here, if you want to arrive early (at) your destination, then you go there earlier.”

His comments were not received well.

“There is a transport crisis in Manila, there always has been,” student activist John Gemuel Maramba told the BBC.

“Students leave at 5am for an 8am class. Millions rely on public transport to get to school and work, yet are subjected to the horrors of excruciatingly slow traffic, overcrowded public vehicles and malfunctioning trains.

“There is a lot of stress and rage that stems from the poor systems.”

“The mass transportation crisis is real,” wrote one Twitter user. “Don’t agree with some high official who tells who otherwise, who himself doesn’t even use public transportation to get around.”

Mr Panelo has since promised to take public transportation to the presidential palace on Friday.

“The challenge to commute is accepted,” he said. “I’ll take the jeepney [a type of bus] and the train in going to work.” 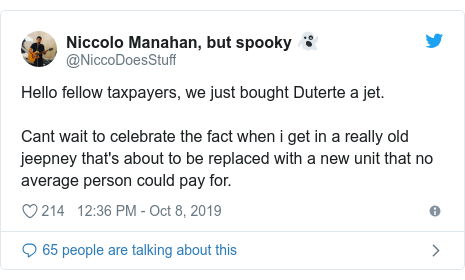 Many Filipinos also brought up President Rodrigo Duterte’s private plane. “The budget for health and education was cut for this,” tweeted medical student Iya Elago.

But one commenter did offer a solution – for her, at least.

“I just work from home,” she said. “It eliminates the need for me to deal with people and stress.”