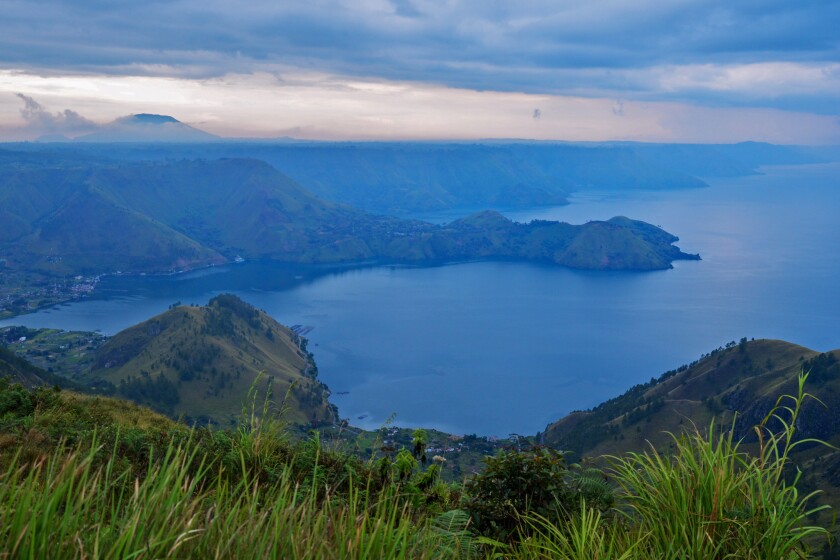 Lake Toba in Indonesia was formed 75,000 years ago after a violent volcanic eruption. It’s now home to a large Christian minority, which is resisting plans to transform the region into a major Muslim tourist destination.(Getty Images/iStockphoto)

LAKE TOBA, Indonesia — The ground still occasionally trembles here, a reminder of the active volcano below that last erupted 75,000 years ago and blasted a crater out of the earth the size of Los Angeles.

The violent explosion, which triggered a global volcanic winter, formed a natural wonder — a massive oval lake ringed by steep mountains and filled in the center with a verdant island that’s lured adventurous travelers to this remote part of Sumatra for decades.

But Lake Toba has seen better days. Its local tourist industry has struggled since the 1997 Asian financial crisis and 2002 Bali bombing. The sinking last year of a ferry that drowned over 160 passengers in the lake’s deep waters delivered another major blow.

It was against this backdrop that Edy Rahmayadi, the provincial governor of North Sumatra, proposed reviving the area by making Lake Toba more amenable to Muslim tourists, a growing force in the global travel industry dubbed halal tourism. Ideas included introducing halal certification for restaurants and building more mosques.

Where critics say Rahmayadi went too far was when he suggested regulating the decidedly non-halal practice of slaughtering pigs in public. To mark a birthday or wedding, residents around Lake Toba typically kill and carve a hog for a feast, sometimes on someone’s driveway.

If this were almost any place else in Indonesia — the world’s largest Muslim nation — many would nod in agreement. But Lake Toba and the surrounding region is home to the country’s largest Christian ethnic minority group, the Batak.

Converted by German missionaries in the 1800s (sometimes at great peril because of instances of ritual cannibalism), the Batak have farmed pigs for generations. Their cuisine is synonymous with pork, often served grilled or stewed in a spicy sauce made with pig blood.

The governor’s mere suggestion the tradition could be curtailed led one local Batak activist to announce a pork festival for later this month replete with hog races, a bacon cookoff and a booth to take selfies with the fair’s most impressive sow.

“Pigs are precious here,” said Togu Simorangkir, who organized the festival on a whim after reading the Muslim governor’s comments in a Facebook post. “They provide financial security. When parents greet their kids, they don’t ask if they’ve eaten yet, they ask if they’ve fed the pigs yet.”

Rahmayadi’s comments touched a nerve. Batak in the area now say they’re unwilling to cede their culture, particularly as the power and influence of Islam has encroached deeper into Indonesian life.

The dispute highlights the ever-present tensions in a country with over 300 ethnic groups spread across 17,000 islands practicing six officially recognized religions — one of which dominates politics in Indonesia while exhibiting growing signs of intolerance.

Once considered at the vanguard of moderate Islam, Indonesia in the past decade and a half has veered toward a more conservative brand of the religion influenced by Arab Wahhabism.

The world’s third-largest democracy has increasingly invoked draconian blasphemy laws, including the conviction last year of a Buddhist woman in North Sumatra who complained the call to prayer at her neighborhood mosque was too loud.

In West Java, a Catholic woman diagnosed with schizophrenia is facing a similar fate after she was captured in a video gone viral wearing shoes into a mosque and bringing her dog in — both of which are forbidden.

Meanwhile, a recently proposed law aimed at prohibiting sex outside of marriage is viewed as another bid by conservatives to impose their will on Indonesian society. Nationwide protests prompted the government to delay passing the law, a sign the country’s moderate majority still holds sway.

Around 90% of Indonesia’s 270 million people identify themselves as Muslim. The remaining population is largely Christian with only small Hindu and Buddhist communities rounding out the rest.

Christians, both Protestant and Catholic, have been subjected to violence and discrimination.

Stories also abound of churches being shuttered for spurious reasons such as a lack of proper permitting.

“The state facilitates discrimination against minorities through religious regulations,” said Andreas Harsono, senior Indonesia researcher at Human Rights Watch and author of the book “Race, Islam and Power.” “Christians are being marginalized. As the largest minority group, they suffer the most.”

The irony, some say, is that the communities around Lake Toba have long been peaceful, with Christians and Muslims living side-by-side, their mosques and churches fixtures of the landscape.

Then on Aug. 22, Rahmayadi finished his midday prayer and held an impromptu news conference where he was asked about Lake Toba’s cleanliness.

That’s when he made his controversial remarks about more mosques, attracting Muslim tourists and regulating pig slaughtering in public.

Soon after, local media were awash in headlines about Rahmayadi’s desire to impose so-called halal tourism on the Christian enclave. Critics lambasted the elected official on social media.

Staff in Rahmayadi’s office say the governor was only suggesting that sanitation rules be introduced so that slaughtered pigs wouldn’t pollute the lake. They dismissed criticism as politically motivated and posted a seven-minute video on YouTube defending the governor, set against dramatic orchestral music.

“The whole thing has been a misunderstanding — and a headache,” said Harvina Zuhra, who heads the governor’s press office.

Zuhra said the issue was conflated with Christian outrage at the time over a national story about a prominent Muslim preacher, Abdul Somad, who likened the cross to the sign of the devil. Abdul is a close ally of Rahmayadi, a former army general who was elected governor in 2018 with broad Muslim support.

Approached for comment, Rahmayadi greeted a Times reporter with an unprompted broshake and referred all questions to his chief of tourism and culture.

That official, Ria Telaumbanua, said Lake Toba was years away from becoming a halal destination.

“We need proper amenities first,” she said, suppressing a chuckle when asked if Lake Toba had any five-star accommodations (hotels there hit a ceiling at around the three-star range).

Lake Toba is one of 10 locations the central government wants to develop into major tourist destinations to boost the country’s travel industry, which is heavily concentrated in Bali.

It won’t be easy. Access to the lake is limited, connected to the provincial capital Medan by a windy one-lane mountain road patrolled by scores of macaque monkeys scavenging for food.

The central government set a target of 1 million visitors to Lake Toba last year. It got about 25,000.

At the heart of the lake is the island of Samosir, formed when some of the earth spewed into the air by Lake Toba’s supervolcano landed back down. Though bigger than Chicago, the island is sparsely populated and only reachable by boat.

In the tourist town of Tuk Tuk, the idea of promoting a more Muslim-friendly environment seemed superfluous to all but a few locals such as Lilis Lubis, owner of a halal restaurant dishing up generous portions of beef rendang and lamb curry.

“There’s only one mosque [in Tuk Tuk] and it’s really small and hidden,” he said.

More troubling to the 51-year-old were concerns he heard from Muslim visitors that they weren’t being served proper halal food in some restaurants.

“I want the government to study the matter to ensure there’s halal supervision,” he said.

Franky Sidabutar, a 60-year-old Batak who grew up in the rugged hills of Samosir, said Lake Toba has established itself as a destination for everyone.

He remembers seeing Western backpackers on the island for the first time in the early 1970s. The locals were initially spooked, thinking the foreigners were ghosts of former Dutch colonists, and tried to drive them away.

Sidabutar is a third-generation pig farmer and operates two Western-style restaurants in Tuk Tuk, one of which gleefully displays hand-painted signs that read “It’s Beer O’Clock” and “Don’t Stop Beerlieving.” Halal-observant tourists are not his sweet spot.

His 40 pigs help him and his family get through the down season, which lasts from October to December.

“I don’t understand why we have to change anything,” said Sidabutar, who wore his black-dyed hair in a mini pompadour and left his brown and gold batik shirt opened at his chest. “Muslim tourists have been coming here for years and never complained. Why do we have to limit Lake Toba by making it halal?”

The governor, Sidabutar added, was agitating conflict where there was none before.

“Batak people are now more united in anger,” he said. “We are fine with more mosques, but we are against halal tourism. It’s not a tradition here.”