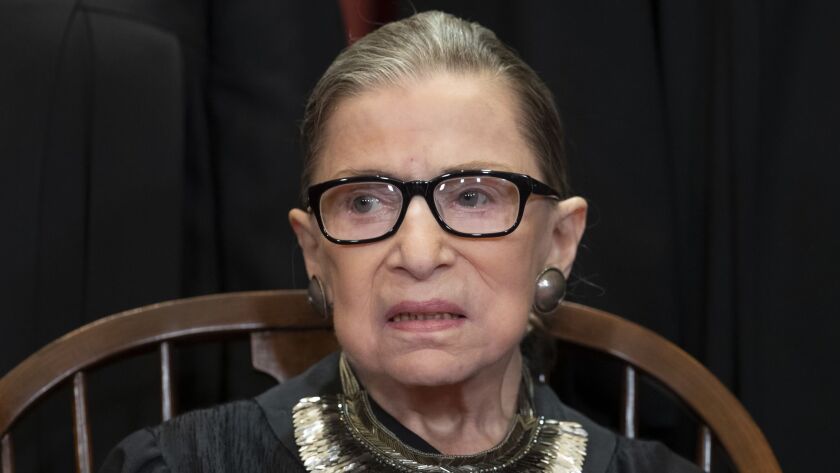 WASHINGTON — Justice Ruth Bader Ginsburg has undergone radiation treatment since Aug. 5 for a malignant tumor on her pancreas, the Supreme Court said Friday, marking her second bout with cancer in the last year and her fourth overall.

The 86-year-old justice “tolerated treatment well. The tumor was treated definitively and there is no evidence of disease elsewhere in her body,” the court said in a statement. “No further treatment is needed at this time.”

It said she had canceled her usual summer visit to the operas of Santa Fe, N.M.

Another health scare for Ginsburg will unsettle her legion of admirers as well as liberals and Democrats nationwide. If Ginsburg, the court’s senior liberal, were forced to step down in the next year, it would give President Trump and the Senate’s Republican majority a clear path to replace her with a young conservative, creating a lopsided majority on the right that would likely last for a decade or two.

But Ginsburg has shown a remarkable ability to maintain a vigorous work schedule despite a series of health problems. She was treated for colon cancer in 1999 and pancreatic cancer in 2009, had a coronary stent implanted in 2014 and broke several ribs in a fall late last year.

But she did not miss any of the court’s scheduled arguments until early this year when she agreed to stay home for a few weeks in January to recover from lung cancer surgery.

Several cancer experts who read the court’s statement on Ginsburg said the initial report was encouraging, but they also cautioned that pancreatic cancer recurs in most patients.

“Based upon the statement, it is fair to infer she had a localized malignancy, which was treated definitely with radiation. It is good to know they see ‘no evidence of disease,’” said Dr. Louis M. Weiner, director of Georgetown University’s Lombardi Cancer Center. “This treatment has a high likelihood of successfully eradicating the cancer. It suggests she should be able to recover fully and return to work. As for the long-term prognosis, we don’t know. Pancreatic cancer has an ominous prognosis.”

“The likelihood of a relapse is very high. This may be very good local treatment. If it is caught early and treated, patients live longer and survive longer,” he said. “She is the very unusual patient who has had pancreatic cancer twice. We rarely see pancreatic cancer at a very early stage. Only time will tell. We all hope for the best for Justice Ginsburg.”

Dr. Otis Brawley, a professor of oncology at Johns Hopkins University in Baltimore, said the five-year survival rate for patients with pancreatic cancer is less than 40%.

“It is very common to have localized pancreatic cancer, to have it treated, and then have it relapse,” he said. But Ginsburg has undergone regular screening because of her past cancer, and hers may have been caught very early.

“I think there is a significant chance she could do well,” Brawley added.

The high court is on its summer recess. Most of the justices will be back at work by the start of September. They will meet behind closed doors in late September to sift through more than 1,000 pending appeals and to decide on new cases to be heard in the term ahead.

According to the Supreme Court statement, Ginsburg completed a three-week course of stereotactic ablative radiation therapy at Memorial Sloan Kettering Cancer Center in New York. The focused radiation treatment began on Aug. 5 and was administered on an outpatient basis, it said.