Moscow says the U.S. is fueling “anti-Russia hysteria and enhancing Americans’ fear of Russia” after the State Department issues a warning to U.S. travelers to reconsider visits to Russia. 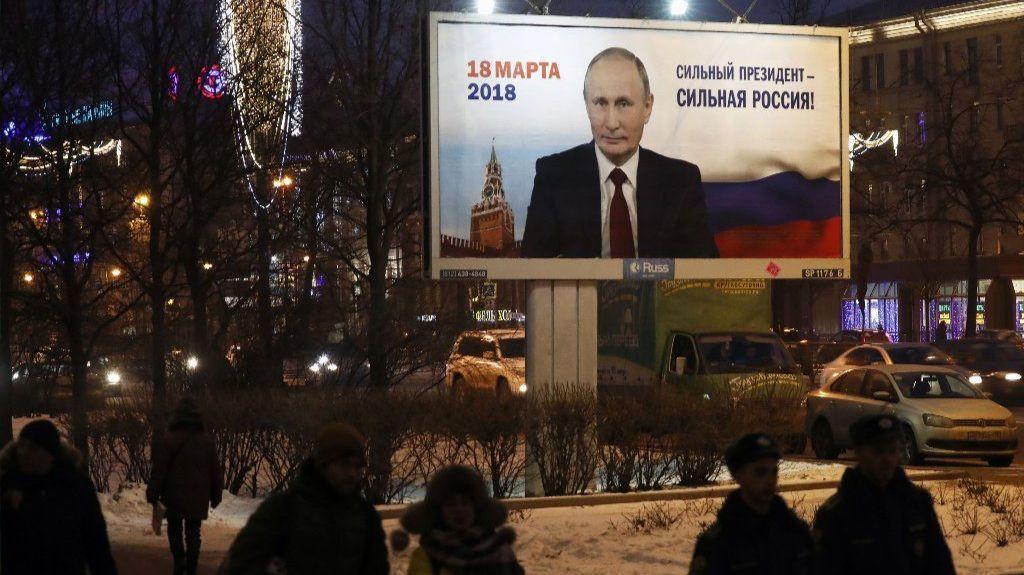 People walk past an election poster in support of Russian President Vladimir Putin in St. Petersburg on Jan. 12. (EPA/Shutterstock)

Russia’s Foreign Ministry on Friday accused the U.S. State Department of cultivating “blind fear of Russia among Americans” after the department issued a travel warning this week urging U.S. citizens to reconsider visits to the country.

Foreign Ministry spokeswoman Maria Zakharova dismissed the travel warning, which included terrorism and harassment as serious concerns. She referred to it as an example of what the Kremlin has said repeatedly is a growing wave of Russophobia in Washington tied to allegations that Moscow interfered in the 2016 U.S. presidential elections.

“In our opinion, this is another unsubstantiated statement, whose primary goal is to trigger another round of anti-Russian hysteria in the U.S., and to cultivate blind fear of Russia among Americans,” she said during her weekly news conference.

The State Department on Wednesday issued a statement indicating that terrorist groups continue to plot attacks in Russia and that bomb threats against public venues are common.

In addition, “U.S. citizens are often victims of harassment, mistreatment and extortion by law enforcement and other officials,” it said.

The warning placed Russia on the third level of the State Department’s four-tiered system for advising U.S. citizens traveling abroad. Sudan, Niger and Pakistan are on the same level.

“Can anyone furnish at least one such example with U.S. citizens?” Zakharova said, referring to the State Department’s warning of harassment against travelers. “We looked through all the archives, but we haven’t uncovered such facts. These recommendations do raise eyebrows.”

The travel warning came amid special counsel and congressional investigations into Russian meddling in America’s democratic institutes during the 2016 election. Moscow has accused Washington of capitalizing on anti-Russian moods to derail efforts made by Russian President Vladimir Putin to ease tension between the two countries.

The State Department’s goal in the rating system “is to help people be safe as they visit countries. … If people want to visit Russia, that’s within their purview,” Steven Goldstein, the department’s undersecretary of State for public diplomacy and public affairs, said in a news briefing Thursday.

Goldstein referred to Moscow’s accusations that Washington was trying to scare U.S. citizens away from visiting Russia as hyperbole.

“I just don’t want to engage comments like that,” he said. “They don’t — they really don’t serve any purpose, and in some ways, they discourage Americans from wanting to go there.”

The warning also came almost a month after Putin called President Trump to thank him for the Central Intelligence Agency’s help in providing information that thwarted what U.S. intelligence said was a planned attack against popular tourist venues in St. Petersburg. Russia’s security services arrested what the state media reported was a group of seven men who were followers of Islamic State and were planning a series of attacks in Russia’s northern city.

Putin and Trump have said cooperation in counter-terrorism efforts could be an important part of rebuilding relations between the countries.

Putin is running for reelection in Russia’s March 18 election. He is widely expected to win another six-year term — his fourth — keeping him in power until 2024.

Critics say his field of opponents has been strictly controlled by the Kremlin. The U.S. and European leaders have criticized the Kremlin for not allowing opposition leader Alexei Navalny to register his campaign against Putin.

On Thursday, Putin told a group of Russian news editors that U.S. criticism of Russia’s ruling barring Navalny from running “obviously shows the preferences of the U.S. administration when it comes to who they want to lead other countries, who they want to move forward in Russian politics, and who they’d like to see in the country’s leadership.”

He said the U.S. was overreacting to what he called unverified allegations that Russia meddled in the 2016 U.S. elections, and that that reaction was hampering efforts to rebuild bilateral relations.

“We see their reaction even to unverified information about our meddling; it is so sharp, aggressive, I would even say,” Putin said during the meeting, which was broadcast on state television.