LEPTIS MAGNA, Libya (Reuters) – The limestone and marble ruins of Leptis Magna on Libya’s coast could be a hive of activity and a top tourist destination, but conflict has left one of ancient Rome’s great Mediterranean cities almost entirely cut off from the outside world. 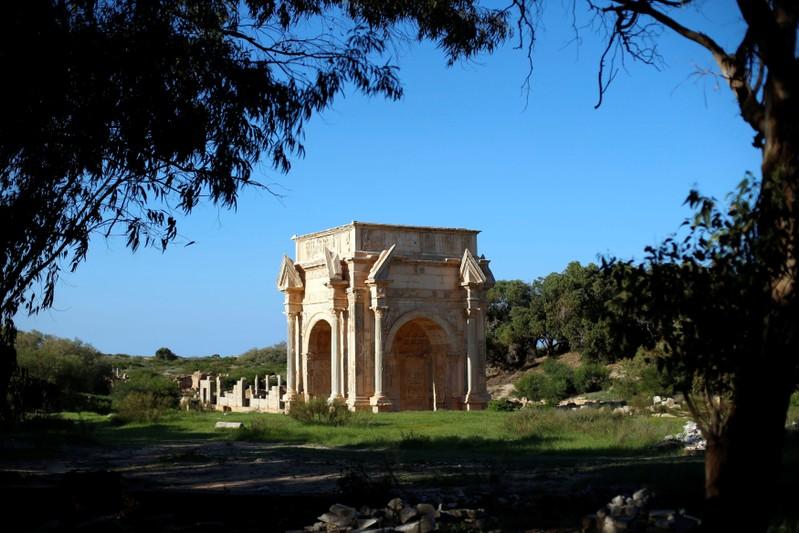 Guards are unpaid and most visitors are local, with only the occasional handful of foreigners, including one or two intrepid tourists, making it to the site.

On weekdays, it is almost deserted, with only the odd group of local teenagers dotted among the expansive ruins.

“There’s something that remains of the tourist police, but they can’t protect it,” says 60-year-old Ali Hrebish, one of several dozen volunteer guards who “for God and country” help watch over the site. “We live here, we protect it.”

In the car park small groups of men drink coffee and watch football on TV. Postcards and souvenirs gather dust in tourist shops that are either closed or deserted.

Leptis Magna, which UNESCO added along with four other Libyan sites to its “World Heritage in Danger” list last year, is mostly clean and appears well preserved, though in one part of the baths a section of flooring recently collapsed and graffiti has been scribbled on marble walling.

“We try to overcome the dichotomy between east and west (forces in Libya) and try to encourage the grass roots to protect the cultural heritage,” said Zaki Aslan, Arab states representative for ICCROM, an intergovernmental body for the conservation of cultural heritage that runs training programs for Libyans.

Ruins are seen in Leptis Magna on the Mediterranean coast of North Africa, east of Tripoli, Libya October 31, 2017. REUTERS/Ahmed Jadallah

“They are trying their best but in a country where to some extent the rule of law is not in place, you have construction, encroachments to some of the sites. This vacuum has allowed some looting,” said Aslan.

On a recent Friday, dozens local daytripping families wandered in Leptis Magna. Two Westerners, one from New Zealand and the other from Austria, were also visiting as part of a trip organized by Soviet Tours, a Berlin-based firm.

Its Italian founder, Gianluca Pardelli, said about 60 non-Arab tourists had traveled to Libya last year, and his company had brought six people to the country since launching in May. UK-based Lupine travel, which offers “unique destinations at budget prices” including North Korea and Chernobyl, also sells trips to Libya.

Pardelli sees huge potential in Libya, including tourism for Italians whose families once settled in the former colony, but for security reasons does not offer trips to ruins at Sabratha in western Libya, Cyrene in the east or to the Sahara desert.

The only problems his clients have had is getting stuck at Tripoli airport, he said. Two travelers were recently questioned for hours, missing their flights.

“When they check passports sometimes we just breeze through the checks and in 30 minutes they are outside the airport, and sometimes it takes hours.”

In Iraq and Syria, two other destinations he offers, it is simpler because travelers only go to areas under government control, he said.

“In Libya the problem is it’s not yet clear who controls what, even in Tripoli.”