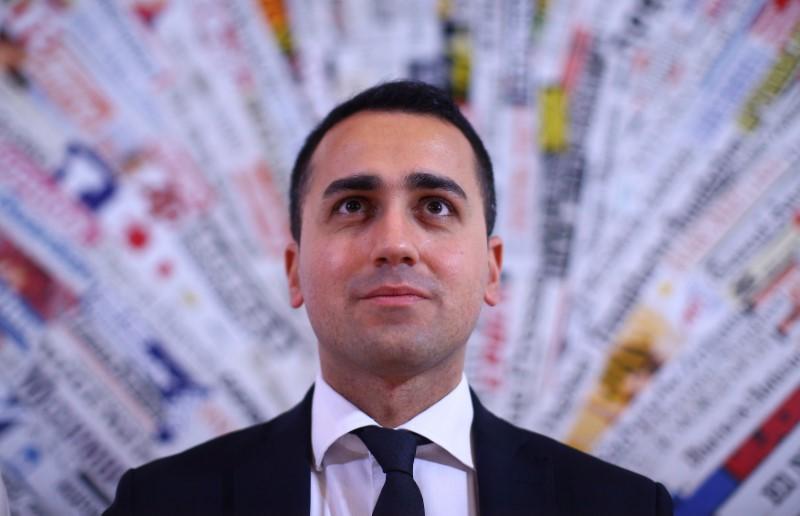 Luigi Di Maio of the 5-Star Movement looks on as he attends a news conference in Rome, Italy March 23, 2017. REUTERS/Alessandro Bianchi

ROME (Reuters) – Italy’s anti-establishment 5-Star Movement looks poised to name Luigi Di Maio as its candidate for prime minister in elections early next year and, if opinion polls are to be believed, the earnest 31-year-old has a good chance of winning.

Di Maio’s critics scoff at his modest curriculum vitae, but his youth and acknowledged communication skills are key to his success.

His rapid rise has mirrored that of 5-Star. Five years ago he was living in a small town in Italy’s poor south and struggling to make ends meet as a designer and maintainer of websites, while studying law at Naples University.

He had previously worked as a steward at Naples football club, a building laborer and a waiter, according to the video he presented to 5-Star supporters to ask them to back him as a candidate for parliament in 2013.

Detractors say his inexperience means he cannot be taken seriously as a potential prime minister. Yet opinion polls show he is by far 5-Star’s most popular politician and among the two or three most popular in Italy.

“5-Star is a young, innovative movement, so having someone very young in the front line helps to get that message across,” said fellow deputy Alfonso Bonafede, a close Di Maio ally.

Boyish looking and immaculately turned out in suit and tie, he presents a moderate image in striking contrast to the movement’s founder, 69-year-old comedian Beppe Grillo who is famous for his raucous tirades against Italy’s ruling elite.

“Di Maio comes across as calm and responsible, which reassures voters who might not be naturally drawn to 5-Star,” said Giovanni Orsina, politics professor at Rome’s Luiss University.

Politically Di Maio, who has taken tough stances on law-and-order and immigration, is seen on the right of the maverick party which says traditional left-right labels have no meaning.

Its policies include the introduction of universal income support for the poor, phasing out fossil fuels and boosting public investment.

Grillo, 5-Star’s de facto chief since he founded the movement in 2009, effectively abdicated last week, saying whoever is elected as its candidate for prime minister will also be its leader.

In line with 5-Star’s credo of internet-based direct democracy, Di Maio will be picked in an online vote of the party’s members this week.

The date of the ballot has not yet been set but the result, to be announced on Saturday, is virtually a foregone conclusion. The only people with any hope of beating him decided not to run.

When 5-Star shook up Italian politics by winning a quarter of the vote in 2013, electing 162 young, inexperienced lawmakers to parliament for the first time, Di Maio was one of the youngest and most inexperienced of all.

However he quickly made an impression on both colleagues and opponents. At 26, he was elected as the youngest ever deputy speaker of the Chamber of Deputies, where he won plaudits for his ability to control the often unruly chamber.

Since then he has often had a rocky ride. In his role as national coordinator of 5-Star’s growing band of mayors, he has been a lightning rod for crises in numerous city halls, especially the capital Rome.

As his prominence increased so did the attacks of his opponents. He made their job easier with some grammatical and historical blunders on social media, including once referring to the late Chilean dictator Augusto Pinochet as being from Venezuela.

Some party colleagues also do little to hide their resentment of his success, but 5-Star insiders say that, crucially, he has always kept the trust of Grillo, who spotted him as a potential leader several years ago.

“He has the most energy, he performs best under pressure and he has the broadest appeal to voters, including older ones where we are weakest,” said one 5-Star strategist who asked not to be named.

Luca Ricolfi, sociology professor at Turin University, said Di Maio was “a good communicator and today that is all that people want from politicians”.

But Orsina said there was more to Di Maio than his ability on television.

“In these five years he has shown he also has political talent,” he said. “He has been at the center of the political battle and has always kept a cool head.”