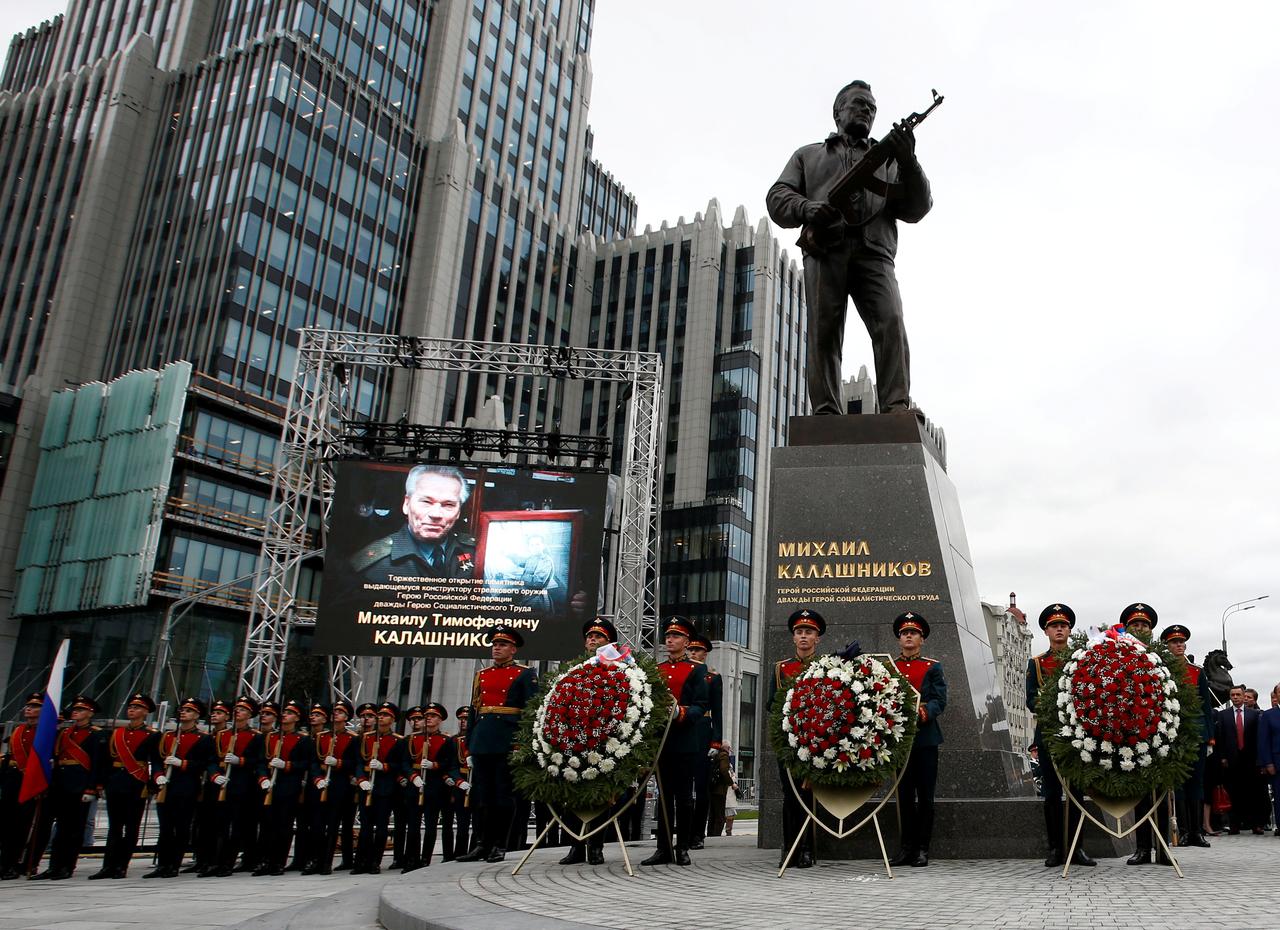 Guards of honour stand next to a monument to Mikhail Kalashnikov, the Russian designer of the AK-47 assault rifle, during its opening ceremony in Moscow, Russia September 19, 2017. REUTERS/Sergei Karpukhin

MOSCOW (Reuters) – Russia on Tuesday unveiled a statue of Mikhail Kalashnikov, inventor of the AK-47 assault rifle that became by some estimates the most lethal weapon ever made and the best known Russian brand abroad.

Perched atop a pedestal in a tiny square on Moscow’s busy Garden Ring thoroughfare, the statue of Kalashnikov, who died in 2013, has him dressed in a bomber jacket and clutching an AK-47 in both hands.

“I created a weapon for the defense of my fatherland,” runs a Kalashnikov quote hewn on the pedestal. At the unveiling ceremony, a Kremlin guard of honor stood to attention as Russia’s national anthem played.

“This weapon is Russia’s defense. It’s one of Russia’s symbols. Alas, for life to continue, for lovely children to grow up, for beautiful women in Russia, there must be a weapon,” the monument’s sculptor, Salavat Shcherbakov, told reporters.

The AK-47, the small-arms mainstay of Russia’s armed forces for over 60 years, is also featured on the national emblems of several African nations and on that of East Timor.

Every fifth firearm in the world is a Kalashnikov and more than 70 million of the assault rifles have been produced over the past 60 years, the Kalashnikov concern said on its website. Kalashnikovs are in service in 50 foreign armies, it said.

A monument to Mikhail Kalashnikov, the Russian designer of the AK-47 assault rifle, is seen during its opening ceremony in Moscow, Russia September 19, 2017. REUTERS/Sergei Karpukhin

Military experts say the AK-47 has killed more people than all other types of modern weapons taken together.

Kalashnikov, who died aged 94, had repeatedly said that pride in his invention was mixed with the pain of seeing it used by criminals and child soldiers.

As well as being embraced by armies, anti-Western revolutionary movements and leftist leaders worldwide, the relatively cheap and sturdy rifle has been used by gangsters, drug traffickers, militants and rebels of all stripes.

The offspring of a large peasant family, Mikhail Kalashnikov started working on a new automatic firearm for the Soviet Red Army after he was wounded during World War Two.

He won a state competition to select a new weapon, beating the Soviet Union’s best designers of weapons, and it brought him the Stalin Prize. His first assault rifle was produced in 1947 and there have been numerous modifications since then.

The Kalashnikov rifle is “a true cultural brand of Russia”, Russian Culture Minister Vladimir Medinsky said at the ceremony.

The unveiling of the monument was timed to coincide with Armsmakers’ Day marked in Russia on Tuesday. Underscoring the importance of the military-industrial complex for Russia’s economy, President Vladimir Putin sent best wishes to the workers of the sector.