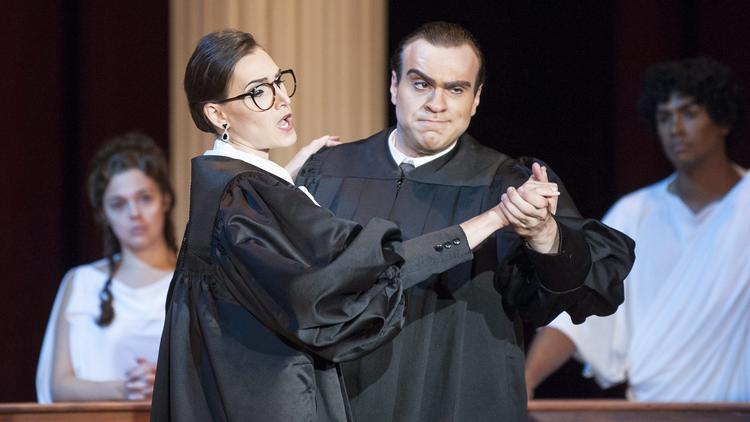 Ellen Wieser portrays Justice Ruth Bader Ginsburg and John Overholt is fellow Justice Antonin Scalia in a rehearsal of the Castleton Festival production of the opera “Scalia/Ginsburg” in 2015.

As liberals try to keep from smacking their lips too loudly about the implications of the death of Supreme Court Justice Antonin Scalia and GOP leaders entertain questionable ideas about blocking the president’s nominee to replace him, there’s one followup story everyone seems to be able to get behind: The long and unlikely friendship between Scalia and his bench mate Ruth Bader Ginsburg.

Though the two were ideological opposites (Ginsburg officiated the wedding of a gay couple last summer; Scalia notoriously compared “moral feelings against homosexuality” to moral feelings against murder), their mutual respect for one another’s intellect and a love of opera triumphed over partisanship.

In an era of endlessly raging culture wars, tolerance has become something of a lost art. Instead, we dig in our heels and declare sides.–

If you’ve read anything about the friendship, you know the buddy-ovie montage sequence goes something like this: Ruth and Antonin at the Washington National Opera; Ruth and Antonin riding an elephant in India in 1994; Antonin standing on the shore in the South of France while Ruth parasails above a motor boat. There’s even operatic comedy show based on their friendship, which premiered in Virginia last summer.

In a moving tribute released over the weekend, Ginsburg quoted a lyric from the show — “We are different, we are one” — and reflected on the ways in which her own opinions became more rigorously expressed thanks to Scalia’s dissents.

“Justice Scalia nailed all the weak spots — he ‘applesauce’ and the ‘argle bargle’ — and gave me just what I needed to strengthen the majority opinion,” Ginsburg wrote.

The idea that listening to another opinion can help fortify your own is almost unheard of these days. Thanks to the echo chamber of social media, the myopic effects of identity politics and the massive polarization of politics in general, opinions aren’t just individual points of view but personal doctrines, never to be challenged or contaminated by outside influence. It’s not enough to express what you think, you have to declare an unwavering commitment: “This is where I stand.”

Even when a political figure so much as defends an opponent in the mildest way it’s considered a radical act. When Bernie Sanders declared in an early debate that Americans were tried of hearing about Hillary Clinton’s email, he scored big. He offered a reprise of sorts last month when he said he would got give in to public or media pressure to attack Clinton based on her husband’s past indiscretions.

Nothing about either of those moments was especially daring or powerful. Sanders can afford to defend Clinton’s marriage and email habits because he knows these aren’t make or break issues for anyone who might choose him over Clinton. But his willingness to disagree with his opponent while acknowledging her basic humanity was so magnanimous, it was almost shocking.

In an era of endlessly raging culture wars, tolerance has become something of a lost art. Instead, we dig in our heels and declare sides. Some of the most educated, purportedly open-minded people I know say things like “I could never be friends with someone who doesn’t support (fill in the blank).”

It’s silly, because most of us are already friendly with all kinds of ideological adversaries without even realizing it. It’s only when we’re offered a megaphone that we apply the scorched earth policy, when we have our own bully pulpit — like, say, a comment prompt on Facebook or Twitter, or that handy defriend button.

If Ginsburg and Scalia had met in the era of Facebook, when the space between gushing adoration and unbridled vituperation started to become vanishingly slim, their bond might not have stood a chance. But their friendship had at least one big advantage over many “friendings” today. It was rooted in a shared set of enthusiasms rather than a shared set of complaints. It wasn’t based on sitting around and griping about the state of the world (not that there isn’t a time and place for that), but actually going out into that world and finding common joy in its offerings.

As more and more of our relationships play out over social media, with political squabbles passing for conversation and emojis standing in for genuine expressions of affection and thoughtfulness, that’s becoming a lost art, too.

~Meghan Daum was born in California and grew up primarily on the East Coast. She is the author of four books, most recently a collection of original essays, “The Unspeakable: And Other Subjects of Discussion.”

Source: Scalia and Ginsburg: The end of a beautiful friendship – LA Times