(Reuters) – Hundreds of thousands of Venezuelans flooded downtown Caracas on Sunday to support opposition candidate Henrique Capriles in the biggest rally to date of his campaign to unseat cancer-stricken socialist President Hugo Chavez. 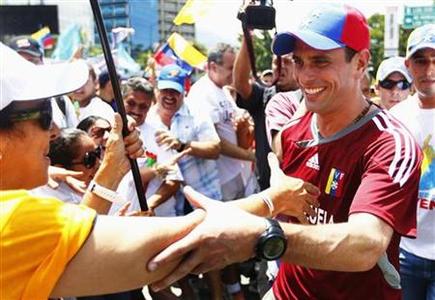 The athletic 39-year-old walked and jogged 10 km (6.2 miles) in the company of supporters to register his candidacy with electoral authorities, burnishing his image of physical fitness in contrast to the convalescing Chavez.

Capriles hopes to replace Chavez’s state-driven socialism with a Brazil-style balance between free enterprise and social programs, and promises an end to the sectarian polarization of Chavez’s 13-year rule.

“On October 7th we will decide not between two men but between two different ways of life,” Capriles intoned from a stage set up before a plaza jam-packed with sympathizers before entering the election’s council.

“Today I’m the candidate because the people have decided, but on October 7th I’ll be the next president of all Venezuelans,” said Capriles, saying one million people had turned out.

During his speech he looked up to address a group of people in a nearby government office tower that has been used to house Venezuelans who lost homes in floods – a problem that plagued Chavez for months and spurred a major home-building campaign.

“You’re going to get out of there and move into a home, God bless you and your family,” he shouted.

The event marked a shift toward high-profile rallies to galvanize supporters after a months-long house-to-house tour of the OPEC nation in which he sought to win over new sympathizers ahead of the October 7 vote.

Marchers on Sunday swarmed the main avenues of Caracas, waving the flag of the opposition coalition and chanting slogans alongside trucks blasting Capriles’ campaign pop jingle.

Some women sported T-shirts with the slogan “Future First Lady,” a nod to the good looks of the bachelor candidate, who has received many online marriage proposals during his campaign.

“We are all proud of this candidate, he is a young man who has filled us with vitality and energy,” said Maria Luisa Botero, 47, a secretary who marched while pushing her 87-year-old mother in a wheelchair. “Even my mom wanted to come out.”

Should he win, Capriles would be Venezuela’s youngest president.

The registration is largely a formality, since opposition sympathizers already chose Capriles as their candidate in opposition primaries in February.

He faces a formidable electoral battle against Chavez, whose inimitable mix of folksy charisma and torrential public spending have maintained his popularity even though his cancer has lowered his profile.

The president and his allies have since last year been handing out apartments, pensions and stipends to poor mothers in a wave of election-driven state largesse.

Most polls show Capriles trailing Chavez by double digits, but Venezuelan public opinion is often volatile and many voters have yet to make up their minds.

Capriles’ victory will rest on winning over wavering Chavez supporters who have grown tired of a murder rate that rivals some war zones, sputtering public services such as electricity and periodic shortages of staple goods.

Opposition leaders in recent years have gained ground in areas once solidly behind Chavez by promising to put competent administration ahead of ideological crusades like Chavez’s vow to battle U.S. imperialism or global capitalism.

“It’s time for a change and the only man who can give that to us is Henrique Capriles,” said Jennifer Ramirez, 30, an administrative assistant marching with her baby in stroller decorated as the “Bus of Progress” – a Capriles campaign slogan.

Chavez will register his own candidacy in a highly promoted ceremony on Monday, which is shaping up to be his biggest rally since he was diagnosed with cancer in 2011.

The government has offered few details about his actual condition since his diagnosis, and a relapse this year after declaring himself “cancer free” spurred rumors that he may be confined to a wheel-chair or at death’s door.

Chavez on Saturday said medical exams showed he was in good health. But Venezuelans believe a sudden turn for the worse in Chavez’s health would upend both his campaign and the governance of a country so heavily dominated by his leadership.