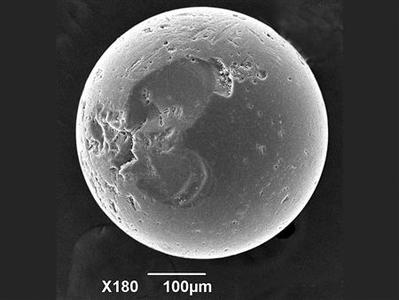 (Reuters) – When Texas geologist Earle McBride visited Omaha Beach in Normandy, France, in 1988, four decades after D-Day, the visible remnants of the Allied Forces’ invasion there had long ago vanished.

But he and a colleague would later discover the history of the June 6, 1944, invasion of Normandy’s beaches – which marked a turning point in World War Two – lingered in the sand in the form of tiny pieces of shrapnel only visible under a microscope.

It wasn’t a discovery that McBride and colleague Dane Picard of Utah set out to make during their tourist visit to Omaha Beach, where U.S. forces suffered their greatest casualties in the assault against heavily fortified German defenses.

“We didn’t think about, ‘Hey, there should be shrapnel here?'” said McBride, 80, a professor emeritus at the University of Texas who retired in 2005 but still goes to his office five hours a day to study rocks.

But the geologists did what long ago became their habit when they visit a beach anywhere in the world: they put a bit of sand in a plastic bag and took it home.

McBride didn’t fully analyze the sample for more than two decades. Finally, in retirement, he made a slide of the sand by using blue-dyed epoxy to bind the grains together.

On a recent day in his tiny office at the Austin university where he taught for 46 years, McBride showed a visitor what he found. Under a microscope, rounded grains – quartz, feldspar, clam and oyster shells – were visible, along with jagged-edged grains.

“You see how angular that grain is?” he asked. “It’s an anomaly – if it had the same origin and history, it should have been well-rounded, too.”

A different light source on the microscope revealed that the jagged-edged grains had a metallic sheen and a rust-colored coating, and when McBride held a magnet to some of the sand, the angular grains proved to be magnetic.

McBride suspected the jagged grains were shrapnel, and he used a scanning electron microscope to verify his hunch. It showed the grains were iron with a bit of oxygen from rust.

He also found the sand included small spherical iron and glass beads, which he and Picard believe were formed by munitions explosions in the air and sand.

He said it’s not surprising that shrapnel was left on the beach. Rather the surprise is that it remained there decades later, long after the wrecked ships, tanks and aircraft were gone.

But the shrapnel won’t be in the sand forever, he and Picard wrote in Earth Magazine last year.

“The combination of chemical corrosion and abrasion will likely destroy the grains in a century or so, leaving only the memorials and people’s memories to recall the extent of devastation suffered by those directly engaged in World War II,” they wrote.

The research by McBride and Picard – a professor emeritus at the University of Utah – was published in the September 2011 edition of The Sedimentary Record, a scholarly journal.

“It was a great approach,” said Xavier Janson, a research scientist at the University of Texas and an editor of the Record. “It was using a geological tool that you usually use to understand where sand grains come from, but instead, it was used to understand what happened on this beach.”

For McBride, the discovery is an example of why he still finds passion in his lifelong work studying sedimentary rocks, the ones most commonly found on the earth’s surface.

The latest project on his desk is a 450-million-year-old rock from Utah roughly the size of a softball; he’s trying to reconstruct the history of how it formed and where its grains originated.

The earth is old, McBride said, and “all I can do is work on one little chunk of the history of sandstones. As we say, so many rocks, so little time.”