(Reuters) – Defense Secretary Robert Gates bluntly told Marines on Sunday that they won’t be able to opt out of their enlistment just because they disagree with a government decision to end a ban on gays serving openly in the military. 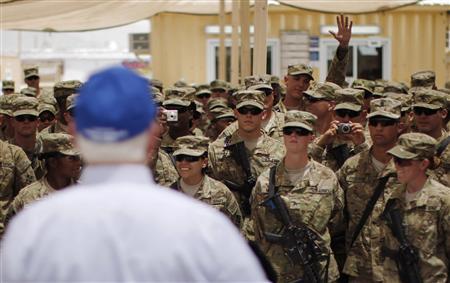 Gates, who is on a tour of Afghanistan to bid farewell to the troops before stepping down at the end of the month, was quizzed by a Marine sergeant about the controversial policy during a question and answer session at a base in southwestern Helmand Province.

Congress voted in December to repeal the so-called “Don’t Ask, Don’t Tell” policy which allows gays to serve in the military only so long as they keep their sexual orientation to themselves. The Marine Corps has been one of the services most resistant to the change.

The new policy will not go into force until 60 days after the president, defense secretary and nation’s top uniformed military officer certify that it can be implemented without affecting military readiness. The military is currently in the process of training service members about the new policy.

“Sir, we joined the Marine Corps because the Marine Corps has a set of standards and values that is better than that of the civilian sector. And we have gone and changed those values and repealed the ‘Don’t Ask, Don’t Tell’ policy,” the sergeant told Gates during the question and answer session.

“We have not given the Marines a chance to decide whether they wish to continue serving under that. Is there going to be an option for those Marines that no longer wish to serve due to the fact their moral values have not changed?” he asked.

“No,” Gates responded. “You’ll have to complete your … enlistment just like everybody else.”

Gates said training was underway to prepare the services for the new policy.

“If we do this right, nothing will change,” he said. “You will still have to abide by the same rules of behavior, the same discipline, the same respect for each other that has been the case through all the history of the Marine Corps.”

Congress acted to repeal the 17-year-old ban in December. Gates backed the move, partly out of concern that legal challenges were on the verge of forcing an overturn of the policy, a move that would have required the Defense Department to implement the changes with little preparation.

No opt-out for opponents of gays in military: Gates | Reuters.