As India’s0Noth continues to struggle with extreme pollution levels, the story has put a fresh spotlight on air quality in cities across Asia.

Beijing has long been notorious for its smog – but statistics show that India, Pakistan and Bangladesh have worse air by far.

So why is South Asia so much more polluted?

Of the world’s most polluted 30 cities, 22 are in India, according to research by IQ AirVisual, a Swiss-based group that gathers air-quality data globally, and Greenpeace.

The remaining eight cities are all in Pakistan, Bangladesh and China – but the list doesn’t include Beijing, which comes in at number 122. 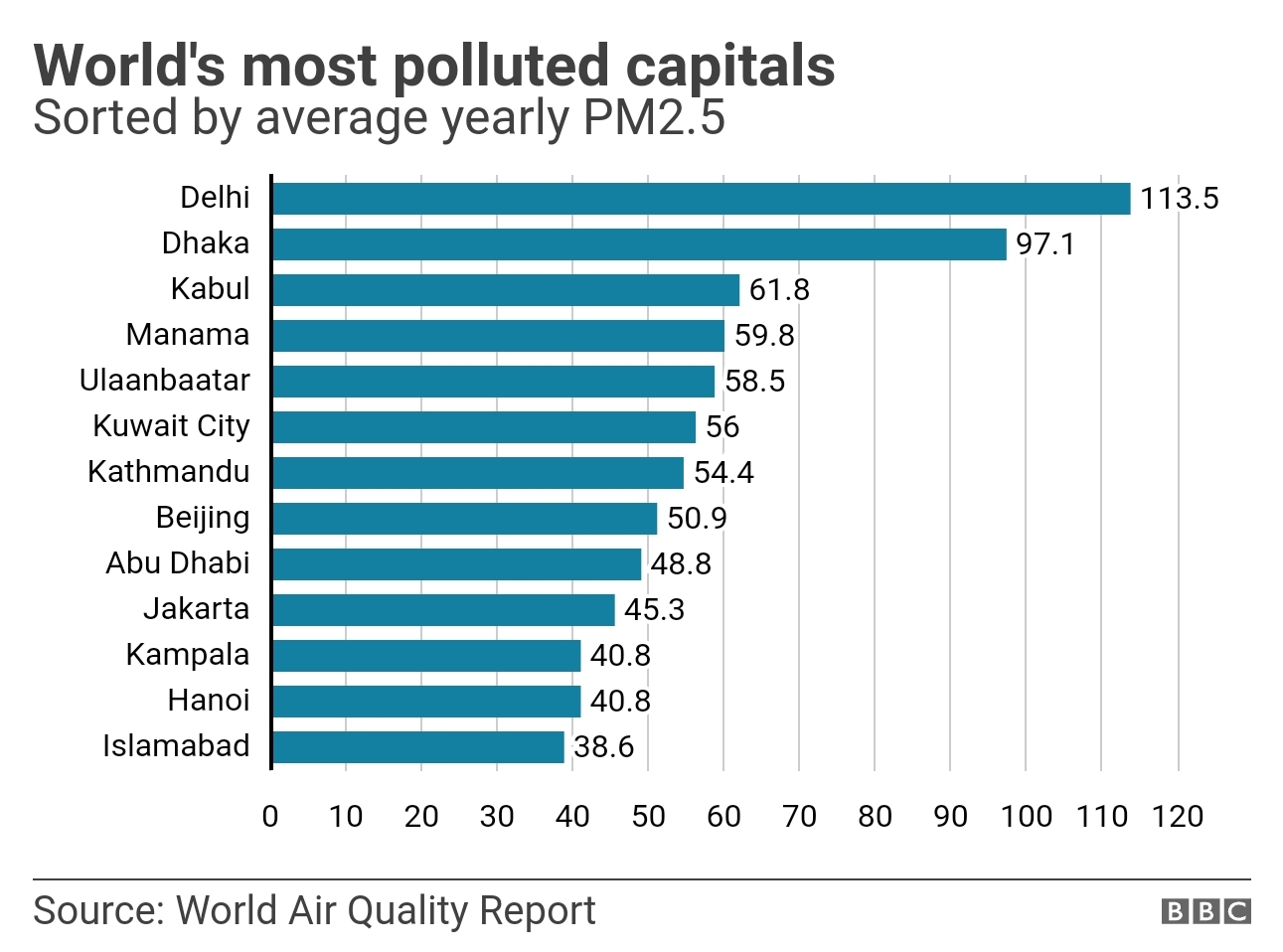 Looking at overall countries, it’s Bangladesh that has the worst air, followed by Pakistan and then India.

All these rankings are based on average air quality per year.

As these countries have very different densities of measuring stations and transparency of data, the statistics have to be read with a degree of caution. But they certainly indicate an overall trend. 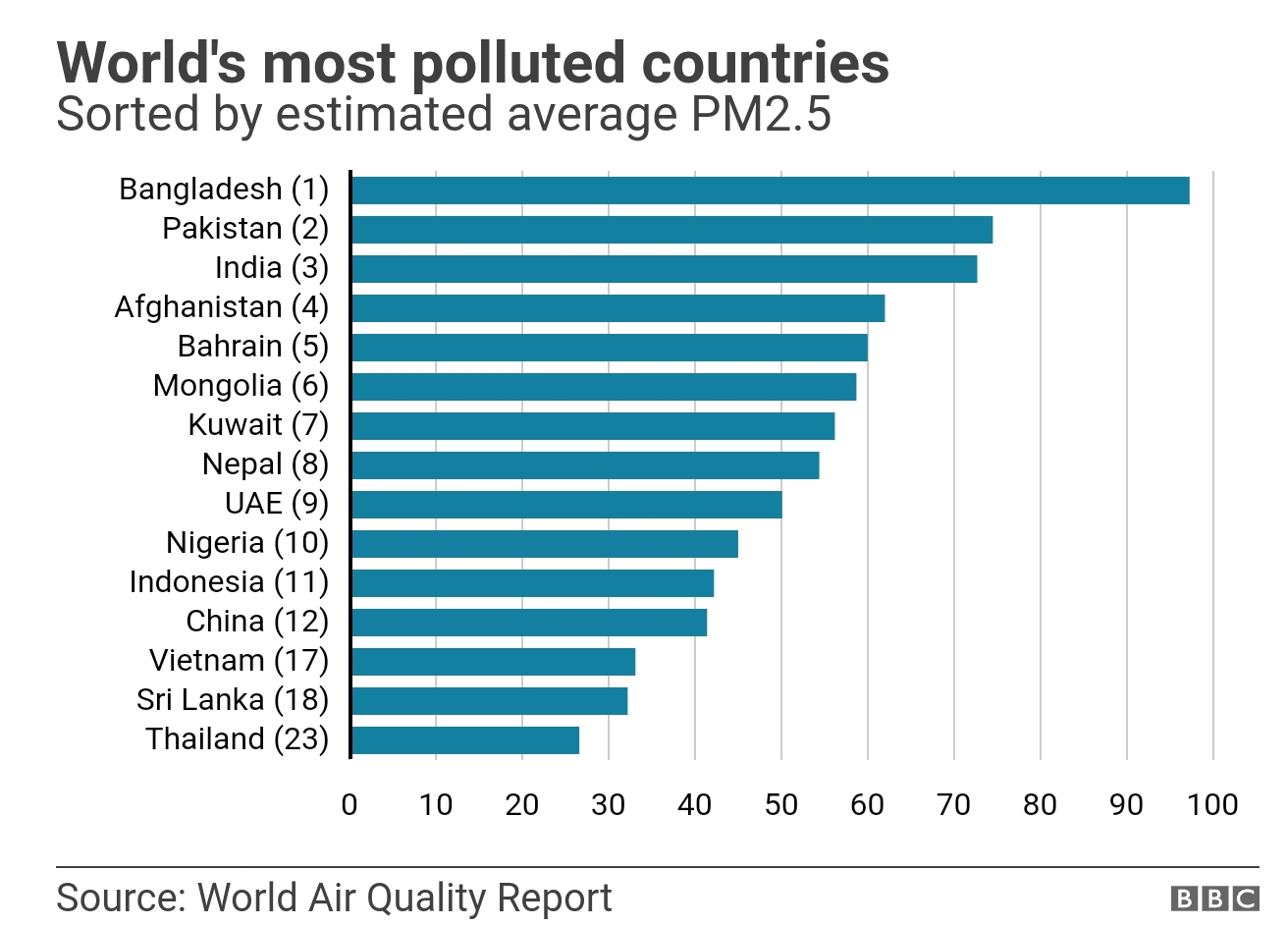 Why is India worse off than China?

What differentiates China from India is that in the latter, there is still a lot of burning of agricultural stubble when farmers want to clear their fields. The burning usually takes place in autumn.

“In this episode, the big problem really seems to have been the agricultural burning,” assistant professor Thomas Smith of the London School of Economics told the BBC.

“That’s one thing that China has tackled. All agricultural burning has been banned, full stop.”

A global overview for fires and thermal abnormalities is made available by Nasa, and allows users to track developments over past days and weeks.

The area north-west of Delhi shows a highly unusual concentration of fires, Prof Smith points out.

“And you can’t underestimate how important agricultural burning is – even though people often think only of cars and heavy industry as the causes.”

In the wake of the pollution spike, India’s Supreme Court ordered a stop to stubble burning in the states around Delhi.

But the city’s situation is made worse by the colder winter air which is more stagnant, trapping the pollutants in place.

Prof Smith also points out that “while India is largely reactive, Beijing tends to be more proactive and preventative to try to stop the problems from happening in the first place”.

Pollution levels are categorised by measuring the levels of dangerous particles in the air. The result is then classified on a scale from good to hazardous.

“The effect of pollution is different for every person,” explains Dr Christine Cowie of the University of New South Wales.

“Some people complain about irritation to the eyes, to the throat, exacerbations of wheeze and asthma symptoms. Coughing is certainly also a very common symptom – even in non-asthmatic people.

“And of course it’s the elderly who suffer, the very young and people with pre-existing respiratory illnesses like or heart problems.”

She explains that even a short exposure to the unhealthy or worse pollution levels can trigger an asthma attack or increase the risk of a stroke. The longer the exposure, the greater the risks.

And the ways to protect oneself are limited.

There’s the advice to stay indoors, to reduce physical exercise and to wear a mask – but in many poorer parts of the world, none of these options really work for regular people.

“It is toxic air,” says David Taylor, professor of tropical environmental change at the National University of Singapore.

“You feel like it’s hard to breathe,” agrees Prof Smith.

“It’s like doing hardcore exercise when you just take a walk outside. And depending on the kind of pollution, you can of course also smell it in the air.”

How does it compare to Europe or the US?

Today, pollution levels in Europe, Australia and the US are significantly lower than the extreme readings that India has experienced in the past few days.

But it’s not always been like that. London, for instance, was notorious for its pollution during much of the 19th and early 20th centuries.

As late as 1952, the so-called Great Smog covered London with a thick toxic layer of pollution, bringing the city almost to a standstill for days, not unlike the situation in Delhi now. It’s thought to have resulted in thousands of deaths.

Back then, power stations along the Thames were major polluters of the British capital.

In fact – much of what we know today about the health impact of air pollution dates back to the experiences of the London smog during those years.

Source: Why is India’s pollution much worse than China’s? – BBC News