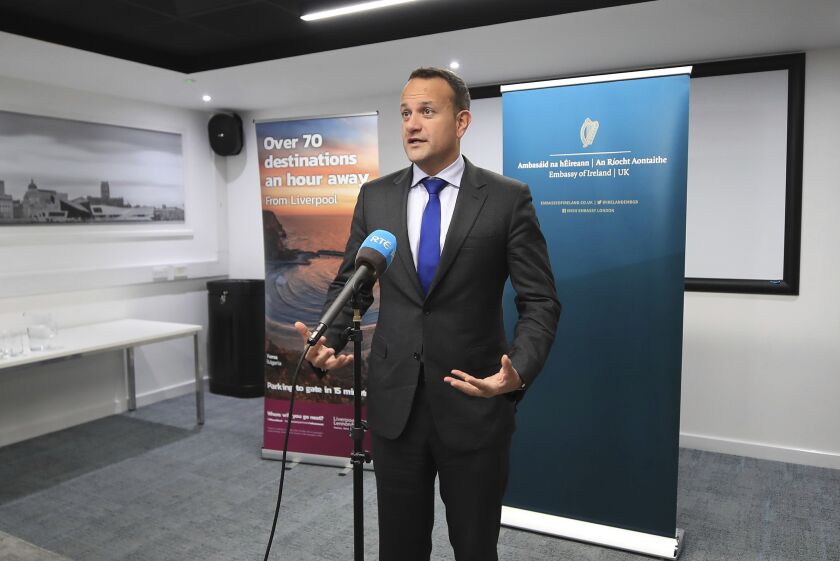 BRUSSELS — The European Union said Friday that talks with Britain to find an amicable divorce deal were back on track, despite huge challenges and a looming end-of-month deadline for Britain to leave the bloc.

EU Council President Donald Tusk said he has “received promising signals” from Irish Prime Minister Leo Varadkar that a Brexit deal is still possible, so he has extended a deadline to continue the Brexit talks.

Tusk, speaking in Nicosia, Cyprus, said “for the first time” Varadkar and British Prime Minister Boris Johnson saw a path toward a deal, adding that “even the slightest chance must be used” to avoid a no-deal Brexit.

An official from an EU nation who spoke on condition of anonymity because the talks are ongoing said Britain had offered compromises on how to deal with the only EU-U.K. land border, on the island of Ireland.

The official said EU negotiator Michel Barnier told EU ambassadors that Britain will shift its position on the custom union, the issue of consent of the Northern Ireland legislature on the border and some regulations on trade.

Immediately, the wheels of the negotiating machinery started churning again. Johnson’s Brexit secretary, Stephen Barclay, got a warm welcome from Barnier before they started almost two hours of talks Friday around breakfast.

The EU said later that the two sides would “intensify discussions over the coming days” before an assessment on the Brexit talks would be made on Monday.

“If there is a will, there is, of course, a way. Otherwise people would not be working on this,” said EU Commission spokeswoman Mina Andreeva.

Originally, Tusk said he was planning to pull the plug Friday on the Brexit talks, but because of the breakthrough he can now see talks going through the weekend, ahead of the EU’s two-day summit, which starts Thursday.

Tusk said “there is no guarantee of success and the time is practically up” but insisted both sides should use every opportunity available ahead of Britain’s scheduled Oct. 31 departure date.

“A no-deal Brexit will never be the choice of the EU,” Tusk said.

Johnson said late Thursday there was a “pathway” to a belated agreement to stave off a chaotic, costly no-deal Brexit on Oct. 31, while Varadkar said the meeting was “very positive.”

After his meeting with Barclay, Barnier said it was essential to keep focused.

“Brexit is like climbing a mountain. We need vigilance, determination and patience,” said the man who once organized the 1992 Winter Olympics in his Savoie region of France.

The main stumbling block remains how to handle Britain’s only land border with the EU, between Northern Ireland and Ireland.

The challenge of keeping this border invisible — something that has underpinned both the local economy and the region’s peace deal — has dominated Brexit discussions for three years, ever since British voters chose in 2016 to leave the EU.

Tusk insisted “even the slightest chance must be used” to avoid an acrimonious split since both the EU and the United Kingdom would be hit hard economically in a no-deal Brexit.

One way to do that could be to extend the Oct. 31 deadline so that negotiators have more time to work things out in legally binding detail. But Johnson has insisted that Britain is leaving on Oct. 31 “do or die” — with or without a divorce deal.

France has also long said that deadlines cannot be extended forever, since Britain was originally slated to leave the bloc on March 31.

In Paris, France’s European affairs minister, Amelie de Montchalin, had another take on the debate, saying that a no-deal Brexit “is probable, at this stage.” De Montchalin told France Inter radio that she does not see an obvious reason to grant a further Brexit extension to the U.K.

“I have a fundamental question: Why give more time? If it is time for the sake of time? It has taken one year, even three years, and we don’t really get it,” she said.