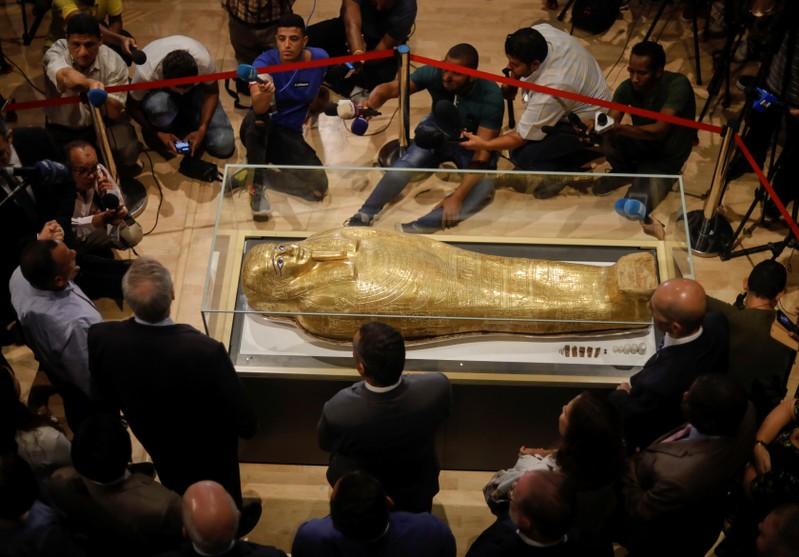 The Gold Coffin of Nedjemankh surrounded by members of media during a news conference to announce its return from the U.S. and display at the National Museum of Egyptian Civilization (NMEC) in Cairo, Egypt October 1, 2019. REUTERS/Amr Abdallah Dalsh

CAIRO (Reuters) – Egypt exhibited on Tuesday the golden coffin of an ancient Egyptian priest that was returned by New York’s Metropolitan Museum of Art following the discovery that it had been looted and illegally sold.

The finely decorated coffin is inscribed with the name Nedjemankh, a priest of the ram-headed god Heryshef of Herakleopolis, and dates to the first century B.C.

The coffin had been buried in Egypt for 2,000 years before it was stolen from the country’s Minya region in the aftermath of the 2011 uprising that toppled veteran leader Hosni Mubarak.

Officials say it was smuggled through several countries by an international trafficking ring before being sold to an unwitting Metropolitan Museum two years ago for $4 million.

It went on display there for six months before judicial officials presented evidence that its ownership history documents were forgeries.

“The U.S. side was cooperative and carried out an investigation and proved that the piece … was taken out of Egypt illegally and that its original location is the Arab Republic of Egypt,” Egyptian Antiquities Minister Khaled El-Enany told a news conference in Cairo.

The wooden coffin is not large, but its gold casing carries fine hieroglyphic inscriptions and is embedded with black crystal, ivory and lapis lazuli, said Mostafa Waziri, secretary general of Egypt’s Supreme Council of Antiquities.

It is due to go on public display in due course at Cairo’s National Museum of Egyptian Civilisation.

Egypt has recovered several hundred artifacts annually in recent years as it tries to bring back items it says were smuggled or illegally sold.