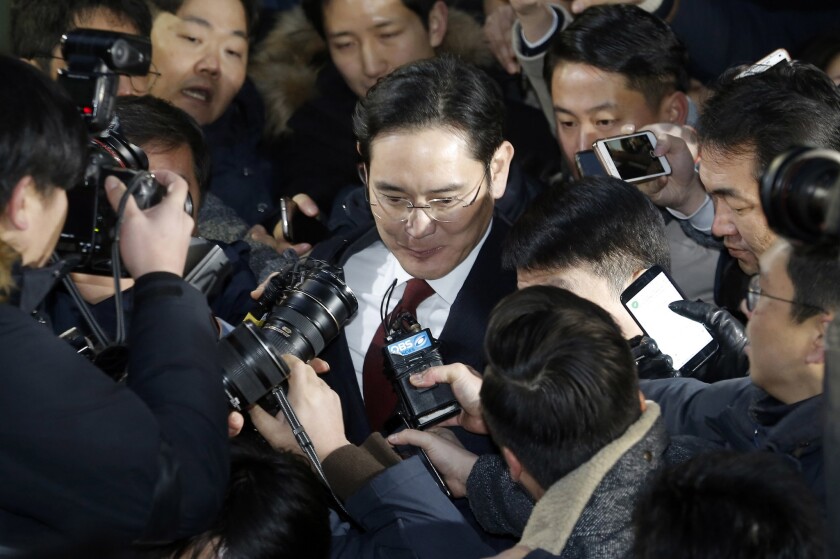 Lee Jae-yong, the 51-year-old vice chairman of Samsung Electronics, paid millions of dollars worth of bribes in exchange for favors from South Korea’s disgraced former president, Park Geun-hye, according to the court. He was convicted in lower courts of bribing Park and her confidant in exchange for government support in a scheme to secure Lee’s succession to the Samsung empire. He was initially sentenced to five years in prison in 2017, only to be freed less than a year later when his sentence was reduced by an appellate court.

Thursday’s decision was the latest development in a scandal that toppled Park from the presidency, embroiled top Samsung executives and laid bare influence-peddling and bribery at the highest echelons of South Korean society.

At the heart of the Supreme Court’s decision on Lee’s prison sentence were three dressage horses — Vitana, Rausing and Salcido, each mentioned by name in the decision broadcast live on national television — purchased by Samsung for millions of dollars.

The court weighed whether the three thoroughbreds, acquired for the use of the daughter of Park’s confidant after a closed-door meeting between Lee and Park, constituted bribes. Reversing an appellate court’s finding, the Supreme Court majority decided they were. The ruling could result in prison time for Lee because the value of the bribes from his company would surpass the 5-billion-won (about $4 million) threshold, which mandates a five-year minimum sentence.

Lee’s arrest and imprisonment were as much a shock in South Korea as Park’s downfall, if not more. The largest of the family-controlled conglomerates known as chaebol, Samsung accounts for a fifth of South Korea’s gross domestic product and was coddled by the nation’s leaders for decades during the country’s push for industrialization.

Lee’s father and grandfather each faced criminal investigations — his father for tax evasion and corruption, his grandfather for smuggling saccharine — but never spent a day in lockup. Other chaebol families have received suspended sentences or been pardoned after criminal convictions.

“People used to say, ‘Presidents have term limits but Samsung is forever,’” said Park Sang-in, an economics professor at Seoul National University. “This is a decision based on common sense…. It signals courts will no longer bend over backward to give them special treatment.”

The professor said Lee’s family was often given a pass because many equated the South Korean economy with Samsung and took for granted that without the family, the company would suffer. He said that the company appeared to operate smoothly during Lee’s 353 days in custody and that South Korean corporations should rely on professional executives rather than be tied to family succession.

South Korean President Moon Jae-in was elected on a promise to do away with entrenched ties between corporations and politicians, on the heels of Park’s ouster after widespread peaceful protests. Since taking office, though, Moon has repeatedly turned to Samsung’s Lee and other corporate leaders, seeking support for his policies of trying to build economic ties with North Korea and boost a foundering economy at home.

In a statement Thursday, Samsung apologized to the South Korean public for the scandal and pledged to “not repeat mistakes of the past.”

“In recent years, Samsung has gone through difficulties due to internal and external uncertainties, and has been unable to focus on preparing to lead future industries,” the company said, asking for “help and support” from South Koreans.

The case now goes back to the lower court for Lee’s sentencing. His possible prison term comes at a time when Samsung faces uncertainties in the global tech industry amid the U.S.-China trade war and has seen the supply chain for its critical semiconductor business imperiled by an ongoing spat between Japan and South Korea.

But Kim Nam-geun, an attorney with two citizen groups that have worked to expose maneuvers by chaebol families for control of conglomerates, said disentangling Samsung’s fate from the Lee family will be healthy for the South Korean economy in the long run.

“This solidifies the rule of law and builds trust in the legal system,” he said. “It’ll discourage collusion between politicians and corporations for immediate gain.”

The court also on Thursday remanded the sentences of Park and her confidant, Choi Soon-sil, to lower courts for review. Park and Choi are serving 24- and 20-year sentences, respectively, on charges including bribery and abuse of power.