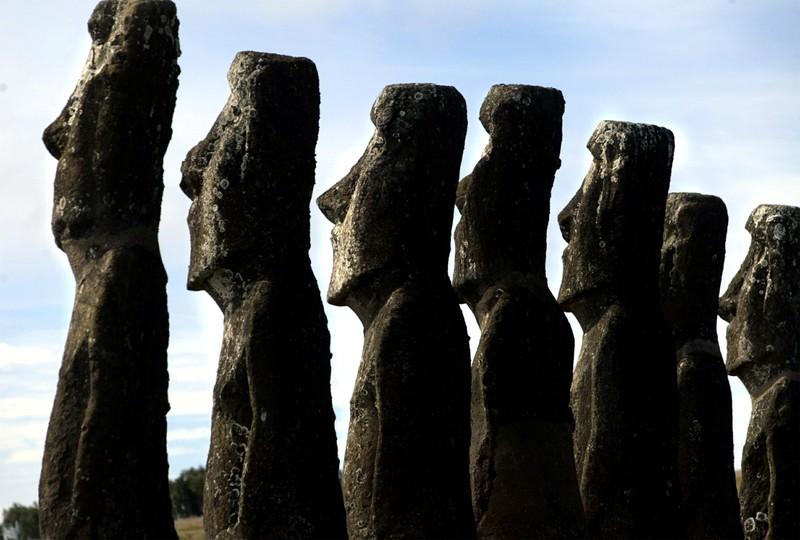 FILE PHOTO: A view of “Moai” statues in Ahu Akivi, on Easter Island, 4,000 km (2,486 miles) west of Santiago, in this photo taken Oct. 31, 2003. REUTERS/Carlos Barria/File Photo(Reuters) – A delegation from Easter Island will arrive in London next week to seek the return from the British Museum of one of the native Polynesians’ emblematic statues.

The seven-foot (2.13 m) tall basalt figure, known as “Hoa Hakananai’a,” meaning “lost or stolen friend” in the local language, was among 900 statues or “Moai,” meaning “ancestors,” carved by islanders between 1100 and 1600

The Hoa Hakananai’a was taken from the island, located 2,480 miles (3,990 km) west of the Chilean capital Santiago, in 1868 by Richard Powell, the captain of HMS Topaze, and presented to Queen Victoria who passed it on to the British Museum.

The statue is one of many artifacts British explorers and dignitaries acquired from around the globe that are displayed in the British Museum. But a number of these treasures have become the subject of intense debate and requests for their return by their countries of origin.

Among these are the Grecian antique sculptures known as the Elgin Marbles and the Benin Bronzes from modern-day Nigeria.

The Hoa Hakananai’a is unique among the Moai because it is made of basalt, while the larger statues that still populate Easter Island were hewn from blocks of compressed volcanic ash. It also bears figures associated with the Tangata Manu, or “bird man”, cult carved on its back.

The delegation will offer to swap the Hoa Hakananai’a for another Moai carved from stone by the contemporary local sculptor Bene Tuki.

Felipe Ward, Chile’s heritage minister who will accompany the delegation to the meeting in London on Tuesday, said he had “a glimmer of hope because they are wiling to discuss it.”

“The best place for this Moai is where it was created,” he told Reuters in an interview in Santiago this week. “Rapa Nui is an open air museum so the conditions for protecting it are perfect.”

A spokesman for the British Museum told Reuters it was always willing to consider loaning out objects from its collection “subject to the usual conditions.”

“We believe that there is great value in presenting objects from across the world, alongside the stories of other cultures at the British Museum,” the spokesman said.

“Hoa Hakananai’a is free to view and is among the most popular and most photographed exhibits with our 6 million visitors each year.”