In the architectural wonder that is the Chicago Cultural Center, to see what is arguably the most magnificent Tiffany dome ever created, all one has to do is look up. 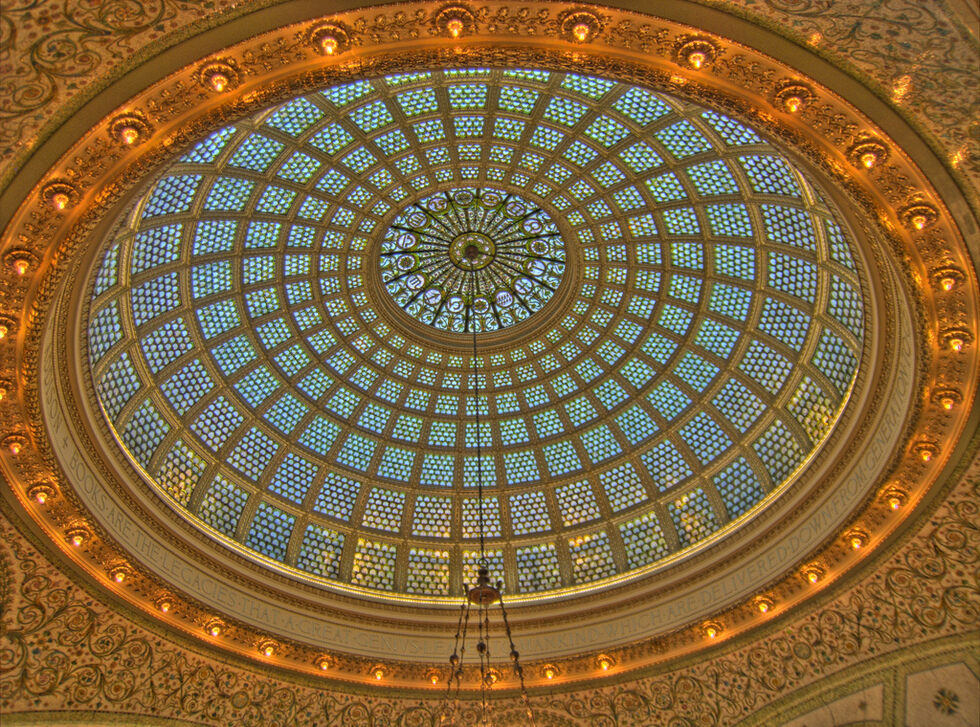 The cultural center’s Preston Bradley Hall is home to the 38 ft. diameter dome which claims to be the largest of its type in the world—and at 10,000 sq. ft. of colorful mosaic wonder including 30,000 individual panes of glass, the boast seems valid.

Completed in 1897, the dome was designed for the Chicago Public Library by Tiffany’s legendary “chief mosaicist” J. A. Holzer. When the gorgeously ornate building was acquired by the Chicago Cultural Center 1986, they inherited the masterpiece that graced the ceiling of the structure that was estimated to be worth $2,000,000—the dome alone is currently valued at around $35,000,000.

Originally sunlit, the translucent dome portrays the 12 signs of the zodiac amongst fish scale shaped embedded in ornate iron framing. In the 1930s a protective outer dome was constructed and while the new backlit appearance was lovely and flawless, many felt the dome lost much of its natural beauty. In 2008, a restoration renewed the dome’s original, naturally-lit charm, saving on energy and repairing the damage of time done to the complicated glass panels and the 5,568 copper foiled, chipped-glass jewels that were discovered in the process.

More than 800,000 visitors gaze up at the newly-restored dome every year, entranced by the new assortment of delightful colors and angles that being enhanced by the seasons outside brings to the formerly stuffy, covered up version. When you tire of admiring the vastness of the dome in Preston Bradley Hall, you can always head over to the center’s rotunda in the Grand Army of the Republic Hall to view the dome’s smaller, but no less alluring smaller counterpart.