The disappearance of Lebanon’s prime minister has become a rallying point for the country’s opposing groups. 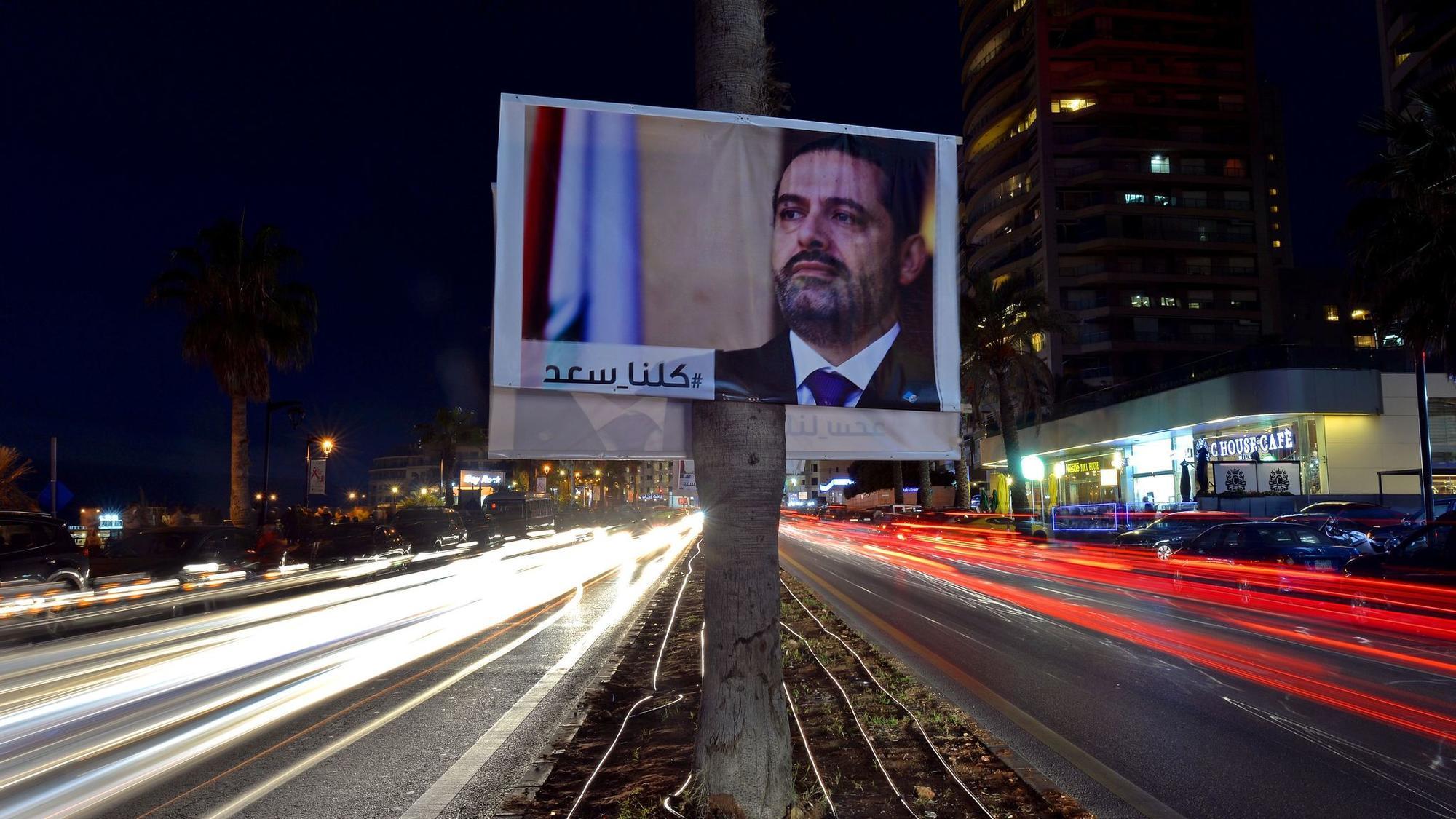 A poster in Beirut shows Prime Minister Saad Hariri with Arabic words reading “We are all Saad.” (Hamzeh/EPA-EFE/REX/Shutterstock)

In the fractured politics of Lebanon, leaders of various factions can rarely agree on much.

But the uncertain fate of Saad Hariri — who on Nov. 4 announced that he was resigning as prime minister and whose whereabouts and loyalties since have become the stuff of conspiracy theories — has provided a rare point of consensus.

“Insulting the head of Lebanon’s government is an insult to every Lebanese, even if we disagree with him in politics,” one of his key rivals, Hassan Nasrallah, the head of Hezbollah, the Shiite Muslim political party and armed faction, said Friday in a televised speech.

“We include our voice to all the Lebanese calling for Prime Minister Hariri to return to Lebanon.”

Hariri’s Saudi-backed party, known as Future, said his release from Saudi Arabia, where he is thought to be captive, is a matter of “full respect for Lebanese legitimacy.”

The saga has the makings of a thriller. Working title: “The Mystery of the Vanishing Prime Minister.”

It all began after Hariri landed in the Saudi capital of Riyadh last weekend for what was though to be a routine trip.

Then, in a move that reportedly baffled even his closest confidants, he declared his immediate resignation, blaming Hezbollah and launching into a jeremiad against its main patron, Iran.

“Wherever [Iran] lands in an area, it plants in it disputes, destruction and ruin,” he said.

There was immediate speculation that he had spoken under duress and was in effect being held hostage by the Saudis.

He has appeared in photo-ops this week with various Persian Gulf and international dignitaries. But his tight smile has been taken as a sign that he was performing for his captors. Lebanese officials have reportedly spoken with him but have only gotten monosyllabic answers to their questions.

On Friday, France’s foreign minister added to the intrigue when he said in an interview with Europe 1 radio, “We think [Hariri] is free of his movements and it’s important he makes his own choices.” The remark followed a surprise visit Thursday by French President Emmanuel Macron to Saudi Crown Prince Mohammed bin Salman.

Hariri’s plane has racked up more than 7,000 miles flying between Riyadh, Europe and Beirut since Nov. 4, local media reported. But neither he nor his family were to be seen.

Memes sprang up on Lebanese social media, including one depicting Hariri calling for help via his Apple Watch and another in which he takes the titular role in a poster for the mock movie “Saving Private Saad.”

A zoom in to Hariri’s watch during his meeting with the Saudi king today. 😎 pic.twitter.com/dZjgrpYT39

Lebanese President Michel Aoun has rallied international support to get Hariri out of Saudi Arabia, and a hashtag campaign, “#We_are_all_Saad,” has made the rounds on social media, and his picture has been put up along some of Beirut’s busiest thoroughfares.

In Lebanon, there are several theories as to the real reason why Hariri quit.

One is that Saudi Arabia forced him to do it as part of its escalating regional battle with Iran. In the last week, the Saudis, after accusing Iran of declaring war on them, intensified a blockade on Yemen, where they have been waging an air campaign against Iranian-backed rebels.

The Saudi government had considered Hariri an ally — he has Saudi and Lebanese citizenship — and was upset that he had been working with Hezbollah in a unity government.

“In the final analysis, it’s not about Lebanon,” said Rami Khouri, senior public fellow at the American University of Beirut. “The Saudis are trying to push back Iran.”

He singled out Saudi Arabia’s 32-year-old crown prince, who launched an anti-corruption drive in his country that has included hundreds of arrests and has been derided by his critics as a power play.

Another theory is that Hariri was swept up in the anti-corruption dragnet himself. The campaign has targeted some of Saudi Arabia’s top companies, including the now-defunct construction giant Saudi Oger, which was owned by Hariri’s family.

One of its biggest clients was the Saudi government, which stopped paying its bills, forcing the company to shut down earlier this year, said Ali Mourad, a Saudi political analyst based in Lebanon.

Because he is no longer prime minister, Hariri lost his immunity and can more easily be prosecuted under Saudi law.

The crisis has come at a time of relative stability in Lebanon, with the national unity government broadly seen as a success.

Officials had forecast that 2017 would have growth rivaling 2010 levels, before the crisis in neighboring Syria decimated trade and tourism. The government’s economic fundamentals were relatively strong and improving.

“No one saw this coming,” said Habib Battah, editor of the Beirut Report. “The government was being productive. There was a real air of cooperation.

“And Hariri these last few months was starting to make amends with his enemies, with a kind of maturity in his political rhetoric,” he said.

There is a growing sense of anger in Lebanon over the events of the week.

“This is an insult to me as Lebanese,” said Joe Fayad, a shopkeeper in Beirut’s Geitawi district. “I have no issue with Saudi Arabia … but this situation [is different].… They take our prime minister, put him under house arrest — it’s humiliating.”