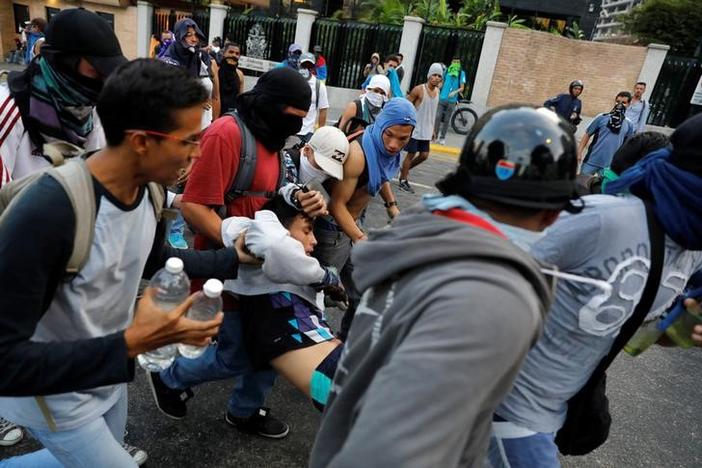 A injured demonstrator is helped by others during a rally against Venezuela’s President Nicolas Maduro’s government in Caracas, Venezuela April 10, 2017. REUTERS/Carlos Garcia Rawlins

Venezuelans in poor areas blocked streets and lit fires during scattered protests across the country on Tuesday night, and two people were killed during the growing unrest in the midst of a crippling economic crisis.

Maduro foes were galvanized by footage of a crowd in the south-eastern Bolivar state heckling and throwing objects at the closely-protected leader during a rally on Tuesday, before state television cut off the broadcast.

In the western Lara state, two people, aged 13 and 36, were killed during unrest on Tuesday, the state prosecutor’s office said in a statement. Lara’s opposition governor Henri Falcon blamed violence on “infiltrators” and “delinquents” who roamed on motorcycles after an energy blackout.

“They go by neighborhoods and shoot people who are protesting,” said Falcon, a former member of the ruling party, urging a negotiation to end Venezuela’s political crisis.

The opposition says Maduro, a former bus driver and union leader who took office four years ago, has morphed into a dictator after a Supreme Court decision in late March to assume the functions of the opposition-led congress.

The court quickly overturned the most controversial part of its decision, but the move breathed new life into the fractured opposition movement.

Two young men had already been killed in protests during the last week, according to authorities. Many are bracing for further violence in a country that is racked by crime and has one of the world’s highest murder rates.

Witnesses said residents of a number of working-class Caracas neighborhoods blocked streets with trash or burning debris on Tuesday night, describing confused street melees and clashes with security forces. The capital appeared calm on Wednesday, although some roads were charred and littered with broken glass.

Government officials did not provide an official account of the events, and the Information Ministry did not respond to an email seeking comment.

Maduro has said that under a veneer of pacifism, a U.S.-backed right-wing opposition is encouraging violent protests in a bid to topple his government and get its hands on Venezuela’s oil wealth.

On Wednesday night, he said the heckling incident a day earlier in the city of San Felix was an opposition attempt to “ambush” him that was thwarted by his loyalists.

“They had prepared an ambush and the people neutralized it,” he said. “I want to thank the people of San Felix for their expressions of fervor, passion, love and support.”

Maduro’s adversaries are demanding the government call delayed state elections, which polls suggest would not go well for the ruling Socialists. They also want an early presidential vote after authorities quashed a recall referendum against Maduro last year.

A ban on opposition leader Henrique Capriles from holding office for 15 years drew broad criticism as he was seen as the opposition’s best presidential hope.

But it is Venezuela’s extended economic crisis that has ordinary people fuming.

Venezuelans have been suffering food and medicine shortages for months, leading many to skip meals or go without crucial treatment. Lines of hundreds form in front of supermarkets as people jostle for hours under the hot sun hoping price-controlled rice or flour will be delivered.

The crisis has especially hurt the poor, long the base of support of Maduro and his predecessor the late Hugo Chavez.

Protesters say they have also been encouraged by stronger condemnation from American and European nations in the last two weeks.

“We cannot accept that the regime is willing to sacrifice Venezuelan lives to remain in power,” said Luis Almagro, the head of the Organization of American States, in a video posted on Wednesday, urging elections.

Another round of protests are planned for Thursday in Venezuela’s more than 300 municipalities. Opposition leaders are calling for the “mother of all marches” on April 19.

Amid what the opposition coalition says is a crackdown on dissent, some 71 people were arrested on Tuesday, according to rights group Penal Forum.

In total, 364 people were arrested between April 4-12 during the most sustained protests since 2014, with 183 people still behind bars, the group added.

A group of young men and teenagers were arrested for throwing “sharp objects” against Maduro’s vehicle on Tuesday night, according to a report by a local National Guard division seen by Reuters. Two sources told Reuters the protesters were hurling stones.

Local media reported lootings overnight in the working class bedroom community of Guarenas outside Caracas, as well as in parts of the capital.

Despite the spiking tensions, many in the opposition worry extended protests will not spur early or fair elections, but rather increase clashes in the already turbulent country.

Major anti-government protests in 2014 eventually floundered, though the opposition at the time did not have as clear-cut demands, poor neighborhoods largely abstained, and the economy was in better shape.