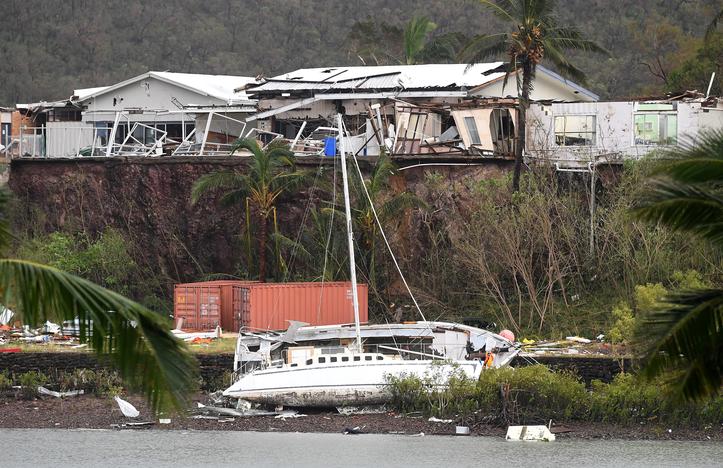 A damaged building is seen behind a boat that was pushed onto a bank due to Cyclone Debbie in the township of Airlie Beach, located south of the northern Australian city of Townsville, March 29, 2017. AAP/Dan Peled/via REUTERS

No deaths were reported after Debbie tore a trail of destruction through Australia’s northeast on Tuesday as a category four storm, one rung below the most dangerous wind speed level, before being gradually downgraded to a tropical low.

Thousands of people took shelter as tourist resorts along the world-famous Great Barrier Reef and coastal areas were belted with wind gusts stronger than 260 km per hour (160 mph). They woke to streets filled with debris.

“It’s been absolutely smashed. You can’t get out or in there’s so many trees down,” Jon Clements, who was holidaying on Hamilton Island in the Whitsundays when the storm hit, told Reuters. “There are hardly any leaves left on any trees.”

Queensland Premier Annastacia Palaszczuk said the worst-hit area was the Whitsunday coast and islands, some 900 km (560 miles) northwest of the state capital, Brisbane. Water was cut to Daydream Island, where there were 200 guests and 100 staff, she said.

At Mackay, not far from the Whitsunday coast, fences and sheds were blown away, rivers were swollen and high tides and heavy swells still pounded the shore on Wednesday, Nine Network television footage showed.

Australian Prime Minister Malcolm Turnbull told reporters at the Crisis Coordination Centre in Canberra: “Nature has flung her worst at the people of Queensland. There will be … a lot of damage done now to recover, to clean up, to restore power, to make power lines safe.”

More than 63,000 people were without electricity.

Queensland State Emergency Services Assistant Commissioner Peter Jeffrey said there had been “a limited amount of severe damage”. Campbell Fuller, a spokesman for the Insurance Council of Australia, said it was too early to put a dollar figure on the damage.

Hundreds of hectares of sugarcane crops had been flattened, Dan Galligan, chief executive of industry body Canegrowers, said in a statement.

BHP Billiton said in a statement work remained halted at its coal mines in the storm’s path, as did Stanmore Coal Limited.

Heavy fain fell over a wide swath of Queensland on Wednesday as the system moved inland, with flood and poor weather warnings in place statewide.

One family near Airlie Beach, over which the eye of the storm passed, had a particularly dramatic night. Palaszczuk said the family welcomed a baby girl who was born inside the Whitsunday Ambulance Station as the storm raged outside.