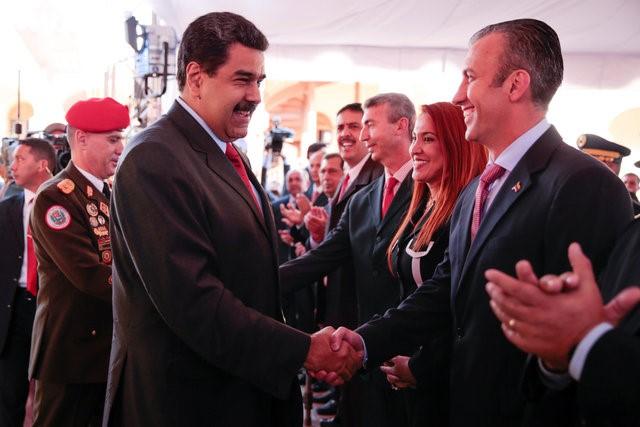 The country is suffering from triple-digit inflation, Soviet-style production shortages and increasing street protests as a combination of dysfunctional state controls and low oil prices. Maduro says he is the victim of an “economic war.”

Economist Ramon Lobo, who has been serving as a legislator for the ruling Socialist Party, will assume the dual roles of finance minister and economy vice president – making him the country’s top economic authority.

“You shall assume, with a firm hand, the oversight of the economy,” said Maduro during a televised broadcast, describing Lobo as an expert in budget matters.Nelson Martinez, who has led the U.S.-based refiner Citgo, will take on the role of oil minister. Outgoing minister Eulogio Del Pino will remain on as president of state oil company PDVSA.

The oil minister has traditionally served as the representative to OPEC, where Venezuela has for nearly three years been one of the strongest voices for production cuts.

Cabinet shuffles have been relatively common in Venezuela since the 14-year rule of late socialist leader Hugo Chavez, who died of cancer in 2013. Officials tend to come from the inner circle of the ruling Socialist Party, and as such do not tend to be the leaders of broad policy changes.

Economists say Venezuela’s economy will not return to growth until it lifts corruption-riddled exchange controls and dysfunctional price control system and rolls back hundreds of nationalizations that have left many industries unproductive.

The country last year brought in a new economic team that promised to create a market-based currency exchange platform, but that system never took off and its promoters were soon removed in a cabinet shuffle.

The central bank not published economic statistics such as economy growth and inflation for 2016. In February, it said consumer prices in 2015 rose 181 percent and GDP had contracted by 5.7 percent.