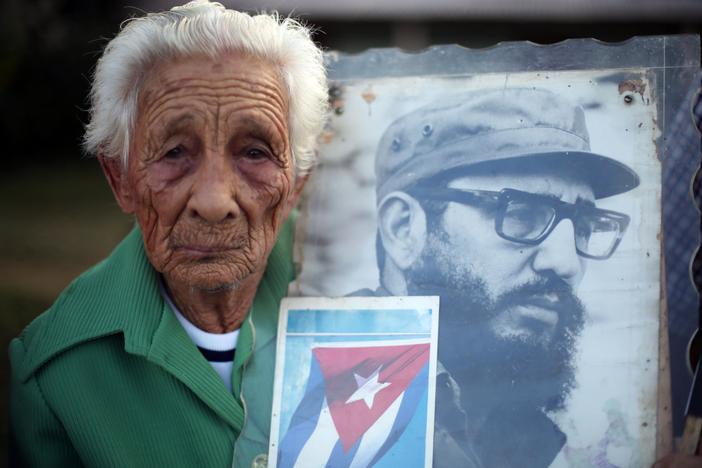 A woman awaits the arrival of the caravan carrying the ashes of Fidel Castro in Guaimaro, Cuba, December 2, 2016. REUTERS/Edgard Garrido

Fidel Castro’s death has highlighted a yawning generational gap between older Cubans who remember grim poverty before his 1959 revolution, and youngsters who appreciate free health care and education but fear the 21st century is leaving them behind.

Julio Lopez, 77, belongs firmly to the first group. He was a hungry, barefoot 14-year-old in 1956 when he first met Castro, who was just beginning his revolution in the Sierra Madre mountains.

For Lopez, who lives in the central city of Santa Clara and wears an old olive green uniform draped in medals, Castro was a Christ-like figure who brought meaning and dignity to a life marked by deprivations.

“We were 12 brothers, we slept on the dirt floor, heated by a fire. We had no medicine, it was extreme poverty,” said Lopez, of his life before he joined Castro’s band of fighters in a war against U.S.-backed strongman Fulgencio Batista.

Illiterate until Castro’s friend Ernesto “Che” Guevara taught him to write his name, Lopez went on to train as a mechanic.

“After the war ended, there was not one child in Cuba who did not have a school to go to,” said the veteran, who traveled the world, fighting with Cuba’s left-wing allies in Angola and working in Iran, Libya and Vietnam.

Since Castro died last Friday, young and old alike have eulogized his successes in providing free health and education for all after the revolution.

Cuba churns out far more graduates than it can employ. Economic reforms pushed through by President Raul Castro since he took over from his brother a decade ago have opened some opportunities in a fledgling private sector but the changes are slow-moving and younger Cubans are keenly aware of what they are missing.

Sitting at a small table in the doorway to his family´s home in bustling central Havana, repairing a pair of headphones, Garcia said that as the world evolves, so should Cuba.

“Fidel was a respected figure, a political compass. But you can´t change things if you put politics before the economy … We don’t want to end up like North Korea,” he added, a large cut-glass stud earring in his left ear and a smart watch on his wrist.

Most Cubans have only known an economy addled by a mix of socialist policies at home and a decades-old U.S. economic embargo.

In contrast to earlier generations, younger Cubans have been tantalized in recent years with the possibility of change.

Raul Castro’s reforms have allowed people to set up small businesses and travel abroad, and in late 2014 he agreed with President Barack Obama to put an end to more than half a century of animosity with the United States.

For veterans like Lopez, the changes are good, and timely.

But modernization has not been deep enough for the young, who keep track of the fast-changing outside world through mobile phones, patchy Internet and foreign visitors.

Raul Castro vows to step down in early 2018. He will likely hand power to Miguel Diaz-Canel, at 56 a relative youngster inside the Communist Party leadership.

But despite making some comments about the need to liberalize Cuba’s state-controlled media and improve Internet access, little is known about Diaz-Canel’s views on the economy.

“As we say on the street, he still hasn’t fired the first shot,” said Abraham Jimenez, a 27-year-old who heads The Sneeze, one of Cuba’s first independent, web-based media outlets. “We have to wait, I wouldn’t like to guess what the scenario might be.”

“The youth in Cuba is a little bit stirred up because there are a lot of people who don’t have enough money to buy things. There is work but the salaries are pathetic,” said Luis Garcia, 23, a medical student who was planning to emigrate to Germany.

There, he said, he would earn more working in a clothes shop than as a doctor in Cuba.

“It’s a shame to abandon medicine, but I have to do it to help my family,” said Garcia, smartly dressed in a lilac shirt, dark pinstriped trousers and large sunglasses.

Driven partly by concerns the United States might soon end a special policy that allows Cubans who reach U.S. land to stay, there has been a new surge in migration.

In the first 10 months of the 2016 U.S. fiscal year, 46,635 Cubans reached the United States, according to official data crunched by the Pew Research Center, almost double the number who arrived in the whole of fiscal year 2014.

Making it all the more urgent to stem the flow of educated youths leaving the country, Cuba also has one of the region’s oldest populations, a result of an impressive life expectancy of 78 years and a birth rate of just 1.45 children per woman.

For those who do stay, the trappings of modern life are infuriatingly hard to grasp.

A civil engineer working on bridge, road and building construction for around $25 a month, 29-year-old Roberto is frustrated he has to go to a local park to get a WiFi signal on his phone, and decide whether to buy clothes or extra food in a given month.

He only gets by supplementing his state wage with other odd jobs.

“We´d like to have more freedoms, to be able to surf the internet, to have better wages,” he said, as dozens of fellow Cubans stood in the park seeking a signal in one of Havana´s WiFi hot spots.

“Times are changing, and so is the way people think,” he added. “But there are values stemming from the revolution that no-one wants to lose, like free health and education.”