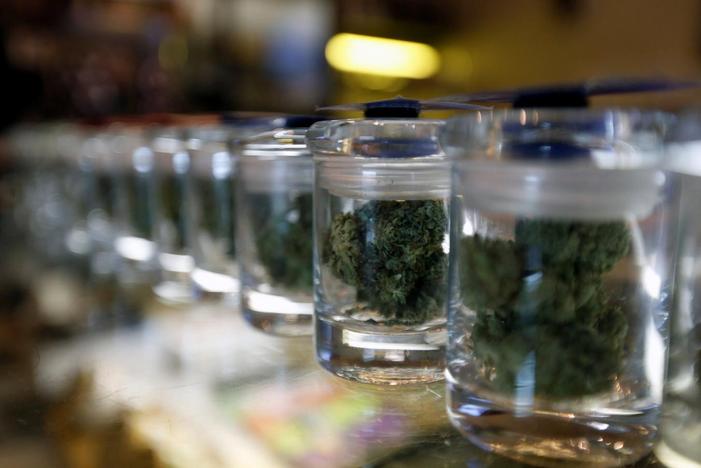 Although the sale of marijuana is a federal crime, the number of U.S. banks working with pot businesses, now sanctioned in many states, is growing, up 45 percent in the last year alone.

Still, marijuana merchants say there are not nearly enough banks willing to take their cash. So many dispensaries resort to stashing cash in storage units, back offices and armored vans.

Proponents believe the Nov. 8 election could tip the balance in favor of liberalizing federal marijuana laws, a move seen as key to getting risk-averse banks off the sidelines.

Measures on ballots in California, Florida and seven other states would bring to 34 the number of states sanctioning pot for medical or recreational use, or both. That could push annual sales, by one estimate, to $23 billion.

The prospect for a market of such scale is adding urgency to calls for a national approach to marijuana that expands banking options. Law enforcement and Federal Reserve officials have expressed concern about the fraud and crime associated with un-bankable cash.

Nearly 600 dispensary robberies have been reported in Denver since recreational pot was legalized in Colorado three years ago.

“There’s not a single human being who thinks there is any benefit at all in forcing marijuana business to be conducted on an all-cash basis,” said Rep. Earl Blumenauer, a Democrat from Oregon who has called for the decriminalization of marijuana since coming to Congress in 1996.

The U.S. Justice Department said in 2014 it would not prosecute banks for serving state-sanctioned marijuana businesses. At the same time, the Treasury Department requires banks to report suspected drug crimes.

At last count, 301 banks were serving marijuana businesses, according to the Treasury Department. Many more have avoided the sector out of fear that making the wrong call could put them at risk, said Robert Rowe, a vice president at the American Bankers Association.

The National Cannabis Association is pressing Congress for a law that would hold banks harmless for handling pot cash, said Michael Correia, a lobbyist for the trade group. If California legalizes recreational use next week, the nation’s biggest Congressional delegation will have a big stake in the issue.

In lieu of federal action, some states have tried their own fixes. Colorado created a credit union system for state-sanctioned marijuana businesses. But it fell apart when the Kansas City Federal Reserve denied a Colorado pot credit union access to the national payments system, which distributes currency and clears checks and electronic payments.

California has no such plans, said Tom Dresslar, spokesman for the state’s Department of Business Oversight.

“This was a problem created by federal law,” Dresslar said, “and it needs a federal solution.”

“We’re not being asked to go over to the gun dealer and ask them if they’re making appropriate background checks,” she said.

Susana de la Rionda has run a Los Angeles medical marijuana dispensary for 12 years and has had to find a new bank about once a year and submit to tax audits twice as often.

Denver Relief dispensary founder Ean Seeb said operators always are trying workarounds to get cash into banks, including washing bills in fabric softener to hide the odor of pot. For a time, he said, one automated teller machine near a Denver mall drew lines every night of marijuana merchants, each depositing the maximum $500 in cash.

Partner Colorado Credit Union began working with state-sanctioned dispensaries two years ago and has developed elaborate protocols to minimize risk, including an initial vetting that can take three weeks. It uses armored trucks to take cash deposits directly from dispensaries to the Denver branch of the Federal Reserve Bank.

When the credit union spots a red flag, Chief Executive Sundie Seefried dispatches employees to pay the dispensary a visit, and she has closed two accounts for compliance problems. Seefried encourages operators to visit by keeping fine cigars in her office, and she stays in touch with regulators.

With 95 dispensary members, Seefried said the credit union is at capacity, and she hopes more bankers will get involved. She fields calls for advice, speaks to industry groups and, earlier this year, shared what she’s learned in a book.

Despite the safeguards, Seefried said she takes nothing for granted. Every few months, she said she drills her staff to make sure they know what to do in the event of her arrest.

“What calls are you going to make?” she said she asks them.

“If you don’t have a little fear going into this because of the illegality at the federal level, you’re probably not the person to do this job,” she said.

Source: Got bank? Election could create flood of marijuana cash with no place to go | Reuters