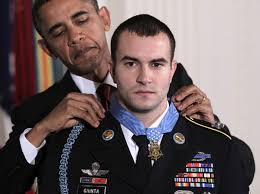 Giunta has opted not to re-enlist and will leave the Army in mid-June, said Army Spokesman George Wright. He and his wife, Jenny, plan to move to Fort Collins, Colo., where he will attend school.

Wright said he didn’t know what school Giunta will attend, but Fort Collins is home to Colorado State University.

Giunta is the first living service member from the wars in Afghanistan or Iraq to receive the Medal of Honor, the nation’s highest military honor.

He was serving as a rifle team leader in Afghanistan when his platoon was attacked in 2007.

In announcing the award, the White House noted he went beyond the call of duty by exposing himself to enemy fire to pull a soldier back to cover. He also shot two insurgents who were trying to carry away a U.S. soldier.

Giunta has since been the Army’s must noted serviceman, waving to the crowd from the field at the Super Bowl and appearing on late night television shows. He sat with first lady Michelle Obama for President Barack Obama‘s State of the Union address last month.

Col. Greg Hapgood, spokesman for the Iowa Army National Guard, said Guinta is an “incredibly high-quality young man and wonderful ambassador for the Army and the United States.”

Hapgood called it “a huge loss the military” to have him leave the military, but he is happy for him because whatever his dream is “he will pursue it.”

Medal of Honor winner Giunta opts not to re-enlist.