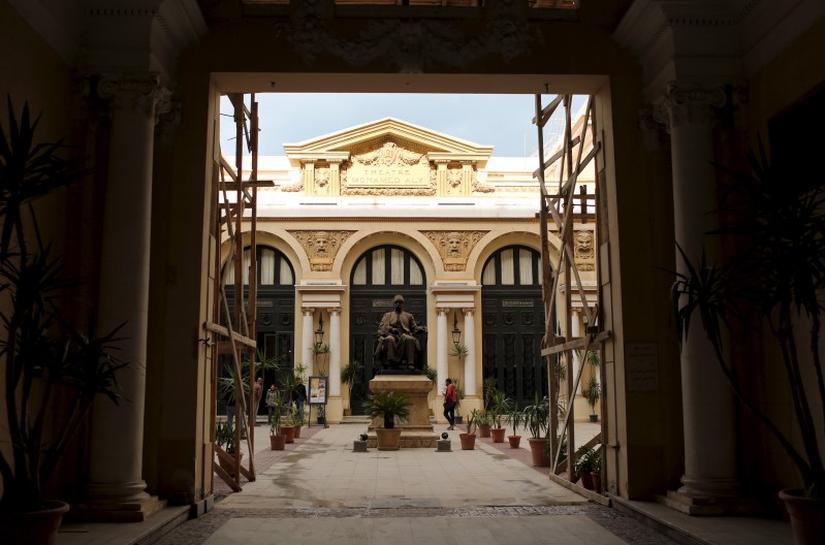 Along Fouad Street, a Costa coffee shop near old buildings with Italian and French architecture reminds Egyptians that commercial ventures threaten to erase traces of Alexandria’s aristocratic past.

Named after King Fouad I, who died in 1936, the street is a throwback to a time when the arts flourished in a cosmopolitan city that is now overcrowded and dilapidated like many of Egypt’s urban centers.

Some, like architect and urban planning teacher Ahmed Hassan, are pushing to preserve some relics of the bygone era while keeping pace with growing businesses – the goal of his “Save Alex” initiative, launched in 2012.

“We aim to try to find a balance between civil society and profit-driven private sector to protect the heritage buildings from getting demolished,” Hassan told Reuters.

“We want a system where all stake holders agree on a system to keep the heritage.”

In the past, the city founded by Alexander the Great and once considered the jewel of the Mediterranean, featured a fusion of communities – Greek, Italians, Armenians, Muslims, Christians and Jews.

Fouad Street is the most potent symbol of Alexandria’s grand history, with its elegant villas and antique shops.

A Reuters photo essay captures some of Fouad Street’s past glory at reut.rs/21Faim7 .

At a car repair shop once used to service the monarch’s vehicles, for example, mechanics work over cars from the 1930s and 1960s.

Sigma, a company with a branch that has been investing in heritage building, hopes to keep some of the magic of the past turning a profit at the same time.

CEO Laithy Mekawy was influenced by the three years he spent as an architect in Istanbul, where he observed the restoration of historic buildings.

He turned a television company on the ground floor of the old Société Immobiliére building, an 1928 Neo-Renaissance structure, into “L Passage”, a food and cafes court with well known brands.

“The beauty of the old architectural buildings, the opera house and the arts center have kept its beauty for years.”

Fouad is one of the oldest streets in Alexandria, featuring landmarks such as a center that used to house the Mohamed Ali club – named for a past king – built near the British forces base in Alexandria during late 19th century.

On the other end of the long street is a statue of Alexander the Great, a present from the Greek government on the occasion of the opening of Bibliotheca Alexandria library and cultural center.

British novelist and travel writer Laurence Durrell, author of The Alexandria Quartet, lived on the street, as did Greek poet Constantine Cavafy.

After the Free Officers toppled the monarchy in 1952, multicultural communities that helped turn Alexandria into a modern city began fleeing, and the aristocracy had no place in the city among widespread nationalizations.

Some long for the old days.

“I remember all the names, they represented the cosmopolitan atmospheres of Alexandria,” she said.

“And in the evening when there’s not much cars, you can always hear the piano coming out of the music school of the Conservatoire.”

Source: On Alexandria’s Fouad Street, some have a longing for the elegant past | Reuters