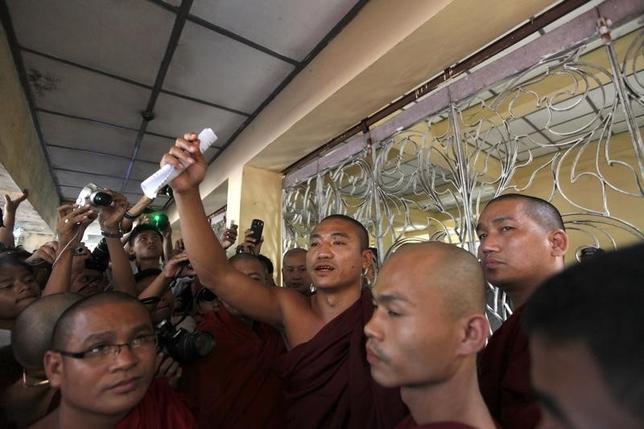 Shin Gambira, leader of the All-Burmese Monks Alliance, talks to supporters while , in the state committee of Sangha Maha Nayaka in Yangon in this January 19, 2012 file photo.

Myanmar has arrested a former monk and leader of a 2007 uprising on grounds of illegally crossing the border, media said on Wednesday, spotlighting the issue of political prisoners that faces Aung San Suu Kyi’s incoming government.

Nyi Nyi Lwin, better known as Gambira, was freed from prison during a 2012 general amnesty, a year after Myanmar’s junta handed power to a semi-civilian government, following 49 years of direct rule of the southeast Asian nation.

Since his release, Gambira has divided his time between Myanmar and neighboring Thailand, but Myanmar authorities have re-arrested him several times, in what his family has described as continued harassment for his criticism of the government.

The widely-read Irrawaddy news magazine reported that Gambira was detained again on Tuesday by immigration officers in Mandalay, the country’s second largest city, for illegally crossing over from Thailand.

He was traveling with his wife, Marie Siochana, to obtain a new passport and faces his first hearing on Wednesday, the magazine added.

“I’m worried about him because he can’t get bail,” the magazine quoted Siochana as saying. “He is mentally ill and needs to take medicine regularly. He needs to look after his health, and I wonder why they still want to arrest him.”

Reuters could not immediately reach Siochana or government officials for comment.

In 2007, Gambira emerged as a leading figure in a mass protest over living conditions and the oppressive rule of then-dictator Than Shwe that was dubbed the Saffron Revolution.

The government cracked down harshly in response, opening fire on protesters and sweeping up those who took part.

Gambira’s prison term of 63 years for his role in the protest turned him into one of Myanmar’s most prominent political prisoners. Members of his family were also arrested.

While in detention, Gambira was repeatedly beaten and tortured, he and rights groups, such as Amnesty International, have said.

Gambira’s arrest came just two days after a visit by U.S. Assistant Secretary of State Antony Blinken, who urged Myanmar to free all the rest of its political prisoners.

“Remaining political prisoners must be released and human rights protected for all, no matter what their ethnicity or religion,” Blinken said.

A new parliament dominated by Nobel peace laureate Suu Kyi’s National League for Democracy will sit for the first time on Feb. 1, after the party won the November election.

Rights groups have urged the former political prisoner to prioritize the issue of prisoner releases when the new government is formed.