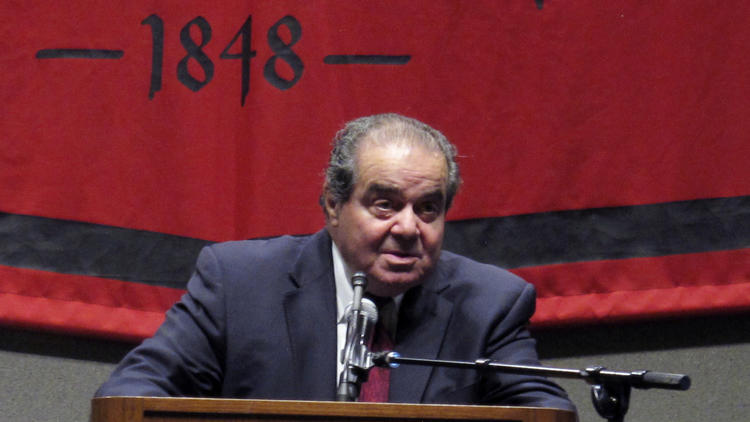 With the U.S. visits of Pope Francis and Chinese President Xi Jinping , the announced departure of House Speaker John Boehner (R-Ohio) and the persistent oxygen-sucking of Donald Trump , a rather noteworthy comment by Supreme Court Justice Antonin Scalia this week went largely unnoticed. Scalia told students at a Tennessee college that he “wouldn’t be surprised” if the Supreme Court ruled the death penalty unconstitutional.

Scalia’s support for the death penalty is as unequivocal as mine — and The Times’ editorial board’s — opposition to it, so he wasn’t talking about changing his mind on the issue. He was reflecting on the views of his eight fellow justices.

“If the death penalty did not violate the 8th Amendment when the 8th Amendment was adopted, it doesn’t violate it today,” Scalia told students at Rhodes College in Memphis, according to the Commercial-Appeal. “But I sat with three colleagues who thought the death penalty is unconstitutional. … Even though it’s mentioned in the original Constitution. ‘No person shall be deprived of life without due process. And in all capital cases, the accused is entitled to a grand jury indictment.’ That’s what the Constitution says.

“(But) I sat with three colleagues, and there is now a fourth: Justice Breyer has announced that he thinks the death penalty is unconstitutional.”

Justice Stephen G. Breyer didn’t quite go that far. In his dissent in the court’s decision supporting Oklahoma’s use of midazolam as the knock-out drug in a three-drug execution protocol, Breyer said he wanted the court to take a fresh look at the constitutionality of the capital punishment system as it works today. And as we’ve seen time and time again, the death penalty is “flawed, expensive, subject to manipulation, applied disproportionately to minorities, not an effective deterrent and, at the end of the day, irreversible,” as the editorial board noted. “It is fundamentally immoral for the state to punish killers by killing them.”

[pullquote]There may be some ground-shifting going on about the death penalty, which would be good news indeed.–  [/pullquote]

Incidentally, the pope spoke out against the death penalty when he appeared before Congress this week. Scalia, a Catholic, was among five justices who skipped the speech.

So what Scalia was doing in his Memphis speech was counting votes. And he counts four: Breyer, Sonia Sotomayor (who has questions about it), Ruth Bader Ginsburg (who also questions it) and Elena Kagan (who has been relatively quiet but has aligned with the other three on votes). It would take five votes to rule the death penalty unconstitutional, and the usual suspect for that swing vote is Justice Anthony M. Kennedy, who has questioned the constitutionality of the lengthy delays in executions, but isn’t necessarily ready to bar them.

But that would depend, of course, on the question that might actually get to the Supreme Court.

In the recent Glossip decision, Justice Samuel Alito wrote for the majority that “it is settled that capital punishment is constitutional” so there “must be a [constitutional] means of carrying it out.” Which is true as far as it goes, but the recent decision by District Court Judge Cormac J. Carney that California’s death penalty is unconstitutional could bring a potentially different argument to the court. Do delays of two decades or more render the death penalty ineffective as a deterrent, and do such delays mean it no longer serves a retributive societal purpose?

While pro-death penalty advocates blames lengthy delays on the defense, in California, the time drag comes from the state itself, under a rigid system requiring specific levels of appeals and a state Legislature that has failed to properly fund it. The result is a “system in which arbitrary factors, rather than legitimate ones like the nature of the crime or the date of the death sentence, determine whether an individual will actually be executed,” Carney said. And speeding things up isn’t the answer, given the high number of exonerations nationwide. A faster system increases the chances of executing the innocent.

Add to that the growing revelations of prosecutorial misconduct, and the questions of constitutionality become too big for even conservatives to ignore. In fact, in recent years, conservatives have come to question the death penalty on moral as well as fiscal and good-governance grounds.

Which brings us back to the recalcitrant Scalia, a conservative mainstay of the Supreme Court. As I said, he doesn’t seem likely to change his mind, and it’s unclear how sharp a vote-counter he is. But he is part of conversations among the justices to which others are not privy. That he “wouldn’t be surprised” by a reversal of the court’s long-standing acceptance of the death penalty’s constitutionality suggests there may be some ground-shifting going on about the death penalty, which would be good news indeed.