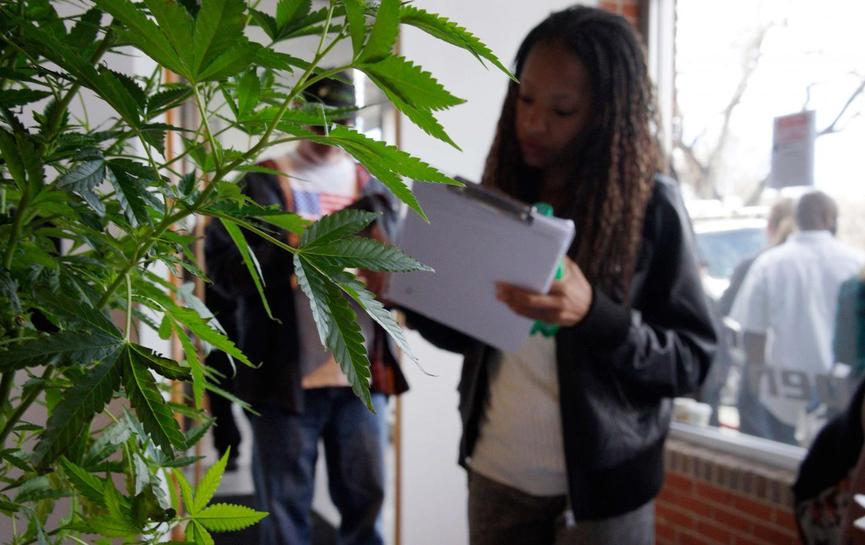 When Matt and Jen Osmun opened their vape shop in Bethel, Connecticut, last December, they didn’t expect to get a boost from the local medical marijuana outlet.

“Sales are going really well, and getting better every month,” said Jen Osmun, who started the business with her husband, a former plumber, after he was injured in an accident. Most customers at Grassy Plain Vape & Smoke buy electronic cigarettes to help them quit smoking tobacco, but a growing number are referred by medical marijuana commissaries in the neighborhood – the nearest is about five miles away.

The Osmuns’ experience is becoming more common as the number of U.S. vape shops soars and shop owners seek to capitalize not only on the vaping trend, but on the more widespread, and legal, use of medical marijuana.

Since 2008, the number of U.S. vape shops has grown to about 8,500, and the sale of electronic cigarettes and supplies climbed to $3.5 billion, according to Wells Fargo Securities analyst Bonnie Herzog. She expects U.S. use of e-cigarettes and vaporizers to overtake combustible cigarettes in 10 years.

Marijuana represents an additional lucrative market. IBISWorld, a market research firm, projects sales of cannabis for medical use to increase to $13.4 billion in 2020 from $3.6 billion in 2015, largely due to demand from an aging population with conditions such as arthritis, Alzheimer’s disease and glaucoma.

GreenWave Advisors, an industry research firm, estimates marijuana sales could reach $35 billion in 2020 if all 50 states legalize marijuana for both medical and recreational uses.

Medical marijuana use is permitted in 23 states and the District of Columbia for a number of conditions, including cancer, multiple sclerosis, severe pain and HIV/AIDS, according to the Marijuana Policy Project. Another 15 states allow patients – often with severe seizure disorders – to use a few strains of cannabis for treatment. Recreational use is legal in Colorado, Washington, Oregon and Alaska.

At many vape shops, the new customers are typically older nonsmokers suffering from serious illness, according to vape shop owners, customers and industry experts.

Patients and medical marijuana groups say they prefer the vaping device for marijuana rather than smoking because they believe there are lower risks. Some states, including New York and Minnesota, prohibit patients from smoking the cannabis. In a vape device, the cannabis leaves or concentrate are heated to a temperature that’s lower than required for combustion.

Vaping devices, which can be as small as a ball point pen, also provide medical marijuana users with more privacy, since the vapor released by the heating device is nearly odorless.

“Vaporized cannabis is a really significant trend in both medical and adult use,” said Christie Lunsford, a Colorado-based consultant who focuses on issues involving cannabis. “It’s consistent, it’s almost instantaneous, and it’s appropriate for a wide variety of consumers.”

NOT A SMOKING CROWD

Tulsa, Oklahoma-based Palm Beach Vapors has opened 14 shops and is in the process of starting another eight, said Chip Paul, CEO and co-owner. He told Reuters that 90 percent of the franchisees eventually hope to capitalize on marijuana-related sales.

Individual stores pay a $25,000 franchise fee and $50,000 for initial stocking, while Palm Beach Vapors helps train workers and set up the store. Franchisees are on average grossing about $20,000 a month, Paul said.

“We think the cannabis market will mimic and mirror the tobacco market,” he said. “We think they will see this (vapor) as a safer alternative.”

Patients need a doctor’s approval to get the marijuana, which is typically available from state approved dispensaries, private growers, and – in some instances – their own plants if they can’t afford the cannabis, which is not covered by most insurance plans.

At the same time, vaping devices have gone mainstream as the industry pushes them as an alternative to tobacco. Marijuana dispensaries in some states also sell the electronic devices.

But vape shops, with their larger selection of devices, have seen an uptick in sales especially from consumers who don’t want to shop at tobacco stores or head shops, which cater more to recreational use.

“We try to steer our patients to someone who will explain to them the different models and find them the one that is right for them,” said JoAnne Leppanen, executive director of the Rhode Island Patient Advocacy Coalition. “You don’t necessarily want to go into a place geared for people who want a tie-dyed T-shirt.”

The process can be daunting for someone who is seriously ill and struggles to even hold a device because of tremors, arthritis or other medical conditions.

Leppanen said medical marijuana patients “do not want to be associated with recreational use.” They also want their privacy. Some patients don’t even “want their cars to be seen in a dispensary parking lot,” she said.

Most investments in the future of legal marijuana have focused on growing, branding and technology firms, especially those already producing medical marijuana. A subsidiary of Scotts Miracle-Gro Co, for example, purchased General Hydroponics Inc, which is popular with indoor marijuana growers.

A small number of private equity and hedge funds have invested in companies that produce and market the cannabis. Billionaire Peter Thiel’s Founders Fund, for example, has invested in Privateer Holdings, which has raised $82 million. Privateer’s portfolio includes companies like Tilray – a medical cannabis company in Canada – which has applied for a license in New York.

By contrast, vape shops are still primarily mom-and-pop operations. VaporFi, one of the largest franchises, has grown in two years to 52 stores.

Kevin Cintorino opened Elevated to sell vaping equipment and snacks in Providence, Rhode Island, where medical marijuana users can gather to vape. He came up with the business plan during a college class.

“Why not open a place where we could get the entire patient community together?” he said.

John Avey and his father, Dillard, opened in May a Palm Beach Vapors franchise in rural Council Bluffs, Iowa, to supplement income from their seasonal cement business. Sales have been so good that they’re already planning more stores.

“It’s like the cherry on top,” said John Avey, 25, about the equipment sales for cannabis.