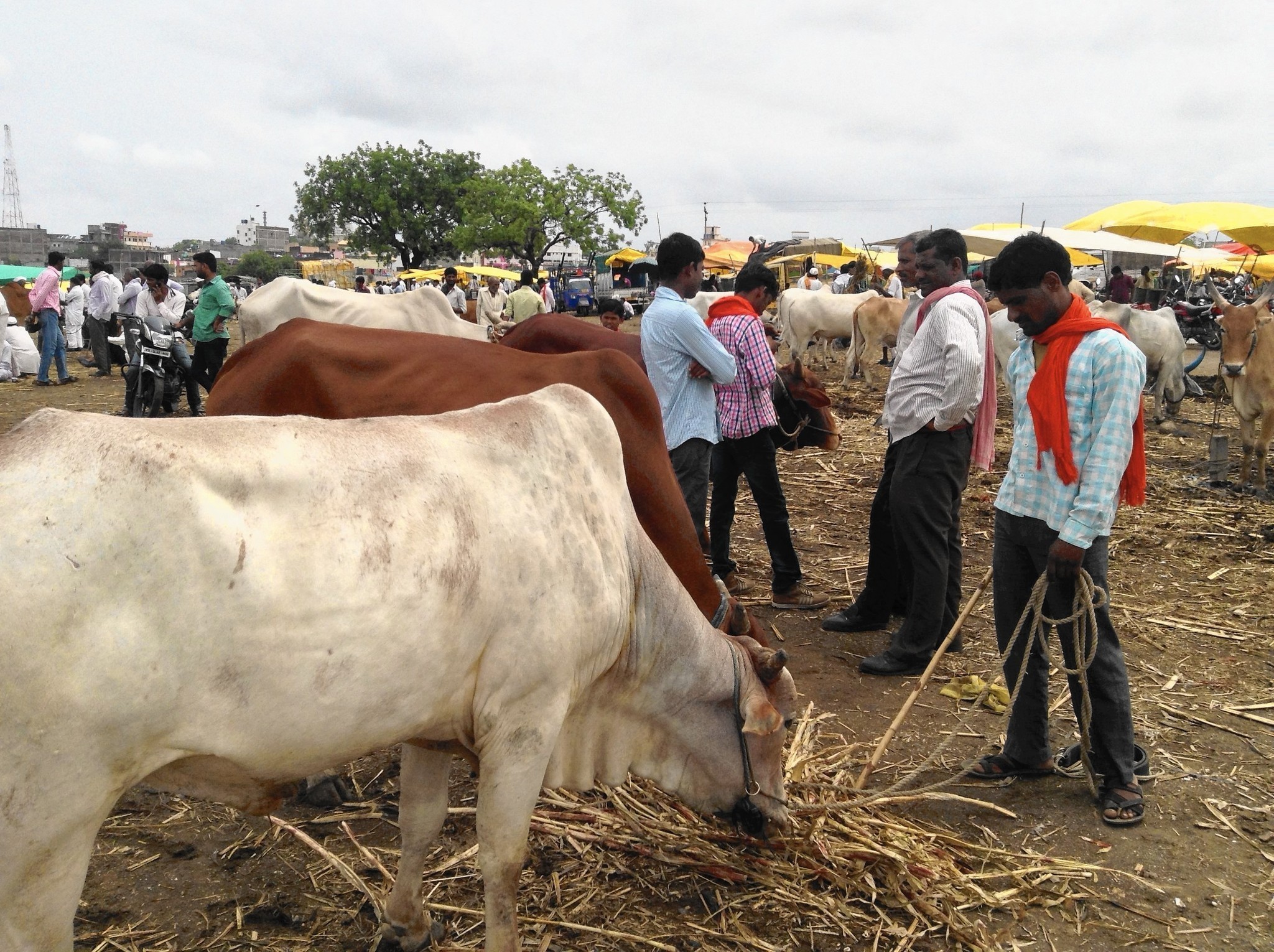 Cattle for sale at a Rajur market in the Indian state of Maharashtra.

Farmer Gopal Dolse has been standing at the open-air marketplace since 7 a.m., his despondency increasing with the scorching heat. It’s nearing noon, and all he wants to do is sell his perfectly healthy bull.

For decades, farmers and vendors have filled the rugged grounds in Rajur, a village in the western Indian state of Maharashtra, for the weekly market. Sellers of bags, belts, goats, chickens and vegetables are deluged with customers each Sunday. But these days, cattle scarcely get a second glance.

“The bull would have been swiftly sold four months ago,” says Dolse, watching other vendors engage with customers. “The beef ban has ruined everything.”

The slaughter of cows has been forbidden in Maharashtra for four decades in deference to India’s Hindu majority, which views them as sacred. In March, a new state government led by the Bharatiya Janata Party, a conservative organization with Hindu nationalist roots, extended the prohibition to bulls and bullocks.

The move dramatically reduced demand for cattle, worsening the plight of small farmers in the predominantly agricultural region.

Already reeling from sustained debt, drought and crop failure, more than 600 farmers in Maharashtra have committed suicide this year, according to Indian newspaper reports.

Cattle had provided a kind of insurance policy for the state’s farmers, who could sell their livestock to other farmers when emergency funds were needed or to butchers when the bovines grew old and unproductive. Almost 300,000 cattle were slaughtered each month in Maharashtra.

Now the slaughterhouses sit idle. Farmers are reluctant to purchase cattle knowing it will be difficult to find buyers later.

Dolse, who lumbered more than 10 miles to the market with his bull, said it previously would have fetched 35,000 rupees, or about $550. He’s ready to settle for less than half that, yet there are still no takers.

The bull would have been swiftly sold four months ago. The beef ban has ruined everything.– Gopal Dolse, farmer in India

Dolse says he also faces the cost of maintaining the animal amid rising feed prices and water shortages.

“A bull or cow needs more attention than a newborn,” says Dolse, who has 10 cattle on a 5-acre farm where he grows cotton, sorghum and soybeans. He spends more than $100 a month on food and water for the animals.

Fayaz Godri, a cattle broker, piled 14 animals into two trucks to bring them to the Rajur market at a cost of 10,000 rupees, or about $155. By the afternoon, he hadn’t sold any.

Officials in Maharashtra, which has imposed one of the harshest “beef bans” in India, promised to set up shelters for aging cattle. But four months later the plans have not been realized.

“Cattle shelters would only rid farmers of the maintenance cost,” says Milind Ranade, a labor activist. “The reduced prices of bulls would keep on haunting farmers.”

Ranade says the laws benefit only Hindus, who make up nearly 80% of India’s population, and many of whom eschew eating beef. Yet beef remains part of the diets of minority Muslims and Christians, as well as poorer Hindus, because it is a cheaper source of protein than chicken or lamb.

Across the state of 112 million people, activists say an estimated 1 million employed in the cattle industry have suffered because of the law.

Mohammad Ziauddin, who sells cattle hides, said his income has dwindled by 75% in the last four months.

“Dull would be a lenient way of describing the business,” he says.

He has kept his butchers on the payroll despite their having little work, saying, “They have been with me for years. I cannot discard them.

“But I too have a family. Once it gets unsustainable, I will have to fire them with a heavy heart.”

Many butchers are uneducated and have no other job prospects. A once robust leather industry has also come to a standstill.

“The government should comprehend the repercussions before passing a law,” says Ranade, the activist. “There is no plan to provide alternatives to those losing their jobs.”

At the Rajur market, some vendors head home after midday, having sold off their stock. But of about 300 cattle on offer, only about five were sold. A few months ago the number would have been in the hundreds.

By 4 p.m., Dolse gives up and decides to return home. As he unchains his bull for the long journey, he watches a customer buy a live goat and carry it off on his motorbike.

“I left home at 4 in the morning and it’s going be another three-hour-walk back to my village,” he says, his eyes showing his fatigue. “I had hoped it would be without the bull.”