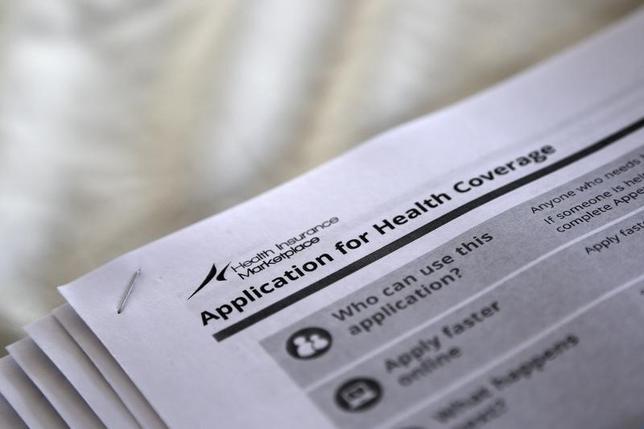 Despite the promise of coverage through the U.S. Affordable Care Act (ACA), the number of people applying for non-compliant, short-term health insurance policies was up more than 100 percent in 2014, according to new data available from companies who broker these policies.

This type of health insurance is exactly the kind that the ACA, known commonly as Obamacare, was supposed to upgrade. Short-term plans provide low-cost coverage for major medical events like hospital stays, with high deductibles and out-of-pocket costs, and are subject to denial if applicants have pre-existing conditions. They do not offer the protections of Obamacare for preventive care or maternity coverage, for example.

The government does not count these gap plans as qualifying health insurance, so people who have them are subject to penalties for being uninsured.

At another short-term carrier, Agile Health Insurance, a subsidiary of Health Insurance Innovations Inc, new policies were up 100 percent last year over the previous year, and are up again so far in 2015, according to Scott Lingle, the company’s senior vice president of business development.

Accounting for much of the jump are individuals who somehow missed the open enrollment period for an Obamacare plan. More than 11.7 million consumers signed up for Obamacare coverage through Feb. 22, according to the government.

People missed out mostly because of poor communication between consumers, the government and insurance companies, says Nate Purpura, eHealth’s director of PR and Content. Those who missed the opportunity to sign up and did not have a qualifying event now have to wait until the next open enrollment period to try again, so they need an insurance plan to bridge the gap.

Both eHealth and Agile are also seeing new signups from retirees who are looking for a low-cost plan to tide them over until Medicare kicks in at 65. At eHealth, the 55 to 64 age group is now 9 percent of the market.

“If you shop for a 50-year-old on healthcare.gov, it is very expensive,” says Agile’s Lingle. “There are people who have looked at the prices and it makes more sense to buy short term.”

The largest constituency is young, healthy people seeking low-cost catastrophic coverage. Those aged 18 to 34 account for 57 percent of eHealth’s buyers. A typical policy could cost around $100 a month, depending on the state of residency and the features of the plan.

These customers include 19-year-old college student Kelly Thomas-Cutshaw, who had no insurance through family and her school did not offer group coverage. Thomas-Cutshaw did not qualify for a subsidy under the ACA because she did not have enough income, yet she could not get Medicaid in Oklahoma, where she goes to school, because she made too much and was not a permanent resident there.

Over the winter, Thomas-Cutshaw became ill, and now has a medical bill she says will take her four years to pay off. She decided she needed some plan in place in case she fell ill again.

When her short-term plan runs out in the fall, she is prepared to sign up for an ACA-compliant major medical plan.

“I can mostly afford to live, so that’s nice,” Thomas-Cutshaw said, thanks to a summer job she just landed. “It been a ridiculous and frustrating experience. I don’t wish this on other people.”